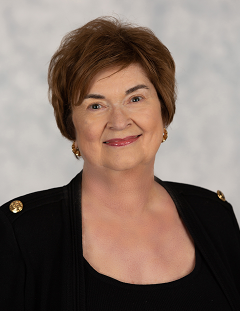 Miriam Hellreich was appointed to the CPB Board of Directors by President Donald Trump and confirmed by the Senate in March 2019.

Ms. Hellreich, originally from Alabama, began her career as a speech and language pathologist when she founded the first speech and language therapy program at Taipei American School in Taiwan. She later moved to Hawaii and established a private practice, delivering speech, language and voice therapy services to a culturally diverse group of adults and children.

Ms. Hellreich has been active in her community, serving as the president of the Hawaii Medical Association Auxiliary and on the boards of the American Cancer Society and the Hawaii Association of Children and Adults with Learning Disabilities. Seeking to help train parents to work with their communicatively handicapped children, she developed a home therapy program for Hawaii’s rural preschool children through the California-Hawaii Elks Major Project. She is also a long-serving member of the RNC Executive Committee.

Ms. Hellreich was appointed by the governor of Hawaii to serve on the Board of Governors of the East West Center (EWC) from 2002-2009.  The EWC is an educational, training and research institution that focuses on promoting better relations and understanding among the people and nations of the United States, Asia and the Pacific through cooperative study, research and dialogue. During her EWC tenure, Ms. Hellreich was Vice-Chairman of the Board of Governors and later served as the Chairman of the Strategic Planning Committee.

Ms. Hellreich earned her B.A. and M.A. Degrees in Speech & Language Pathology at the University of Alabama. She is married to Dr. Philip Hellreich and has an adult daughter.