In the days following President Biden’s first press conference last Thursday, I found myself revisiting many of the journalists’ questions with considerable annoyance.  And when I read the transcript to check my concerns, I actually cringed.

Many of the journalists focused on blame rather than solutions.  They drilled down on politics rather than possibilities. Under the guise of  “transparency,” they focused on their needs – not others’. Their impatience, just 65 days into a new president’s tenure, was markedly out of step with a President seeking to patiently pursue his priorities – not theirs. They sought to make “news” with questions that were as senseless as they were premature, and, I would assert, out of sync with citizens’ concerns.

On the filibuster: “Can your presidency be a success if you can't make progress on those four challenges: climate change, immigration reform, gun control, voting rights?” pressed Zeke Miller of the Associated Press, suggesting all was lost without filibuster reform.

“Well, I plan to make progress on all of them,” Biden responded ­– clearly not about to declare failure yet. “But that’s going to be for the American people to decide.” 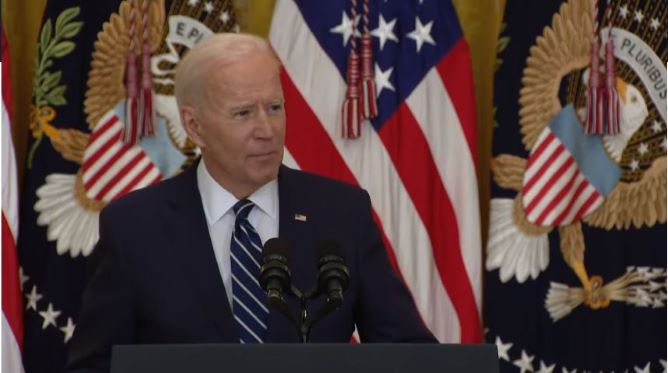 On immigration, Yamiche Alcindor, of the “PBS NewsHour,” suggested that Biden’s quick rollback of some of Trump’s harsh border orders was to blame for the immigration influx. “Mr. President. You’ve said over and over again that immigrants shouldn’t come to this country right now; this isn’t the time to come. That message is not being received. Instead, the perception of you that got you elected – as a moral, decent man – is the reason why a lot of immigrants are coming to this country and entrusting you with unaccompanied minors,” she declared.  “How do you resolve that tension?”

“The truth of the matter is: Nothing has changed,” Biden said, pointing to the various forces that have motivated new arrivals this year and in previous years.

ABC’s Cecilia Vega similarly pressed Biden on whether his messaging was “encouraging” families and children to come to the U.S. and overcrowd facilities. “There are kids that are sleeping on floors. They are packed into these pods … Is what’s happening inside acceptable to you and when is this going to be fixed?” she demanded.

“Is – that’s a serious question, right?” asked an incredulous Biden, as he laid out still other steps he was taking to address border challenges, challenges that he fully acknowledged. But he went on the record to say that the overcrowding “is totally unacceptable.”

“…We haven’t seen the facilities in which children are packed together to really give the American people the chance to see this,” said NBC’s Kristen Welker.  It’s not clear to me that the American people are clamoring for a look at overtaxed border facilities, nor are they uninformed about the conditions. Still, she demanded: “Will you commit to transparency on this issue, Mr. President?”

On running for re-election: There were questions designed to make “news,” even though that news was not very meaningful.

“Have you decided whether you are going to run for re-election in 2024? You haven’t set up a re-election campaign yet, as your predecessor had by this time,” asked CBS’s Nancy Cordes.

“The answer is ‘Yes,’” Biden said, saying he expected to run. What else could he say without prematurely donning the lame-duck mantle?

Following up, CNN’s Kaitlan Collins posed the same question: “You also made some news by saying you’re going to run for re-election.”

Biden corrected her: “I said, ‘That is my expectation.’”

“So is that a ‘yes’ that you’re running for re-election?” she persisted.

“Look,” Biden responded, “ I don’t know where you guys come from made. I’m a great respecter of fate.”

“And do you believe you’ll be running against former President Trump?” she persevered.

“Oh, come on.  I don’t even think about … I have no idea,” an exasperated Biden replied. “I have no idea if there will be a Republican Party. Do you?”

There were missed opportunities to probe so much more:

I’m all in favor of tough questions that hold public officials accountable. But questions that don’t elicit meaningful knowledge just add to the media noise. Journalists should think hard about buying in too easily into current political narratives. And they should examine what role they might play in making the possible impossible.