How might public broadcasters find the resources to expand local news?

In recent weeks, public broadcasters in four parts of the country have employed a variety of strategies, including a merger, a legacy endowment, a statewide news match and sponsored local content.

These efforts don’t just aspire to add more local reporters.  Rather, they are seeking to understand and spotlight overarching community narratives, give a megaphone to community assets, and raise awareness of and support for the role that news and information play in their regions. 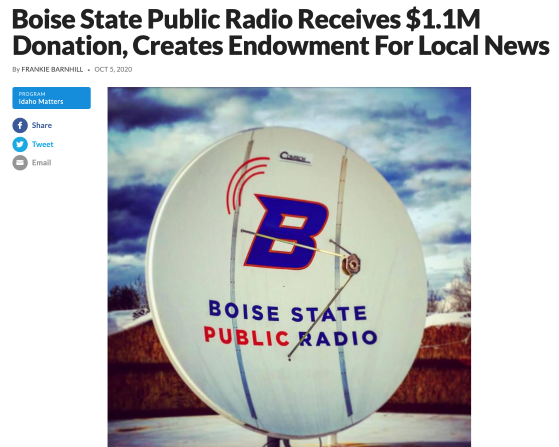 Take Boise State Public Radio. When Charles and Lorraine Childers died and unexpectedly left the station $1.1 million (after having donated only about $500 during their lifetimes), the station asked whether it could leverage the gift in a more purposeful way.

It was the largest gift in the station’s history. And, while it was unrestricted, the station announced on October 5 that it would use the gift as a fulcrum to launch an Endowment for Local News and “highlight the fact that we do local news and it’s worth supporting,” said General Manager Tom Michael.  “We’re not just a conduit for NPR.”

In the last couple of years, the station has more than doubled its news staff, adding more than seven journalists, with the help of small grants. The new gift will help support its “Idaho Matters” program in the coming year while earnings on the endowment will support future journalism.

“We really debated and wondered if we could make a campaign of this, telling people, ‘You’re backing a winner,’ ” Michael said. “So that’s what we did.”

One result, he said, is that some listeners have responded by telling the station, “I’m going to put you in my will.”

On Giving Tuesday this week, the Colorado Media Project launched a statewide news match for 25 of the state’s smaller news outlets, including four public radio stations (Aspen Public Radio, KBUT Community Radio, KSJD Community Radio and KSUT Public Radio) plus ethnic and other community news organizations. It is believed to be the only statewide News Match initiative in the country.

If a participating news organization raises up to $5,000, it will be matched with up to another $5,000 from grants raised by the project. That is significant for some of the participants. If all reach their goal, it would unlock a $250,000 into the state’s media ecosystem.

The month-long initiative, #newsCOneeds, provides the participants with messaging help and social media guidance so they can reach out to potential donors with the same message. The goal, said program manager Philip Clapham, is to create a “unified drumbeat to the public about the importance of giving to news organizations.”

The statewide match parallels the national New Match program run by the Institute for Nonprofit News for its members. INN's News Match matches up to $20,000 raised by its participants. The Colorado News Match, however, is open to locally owned, independent for-profit news outlets as well as nonprofits. Not eligible are any chain or hedge-fund-owned news outlets, but in a remarkable spirit of collaboration, these ineligible news organizations could "audit" the training and messaging resources to help them launch their own fundraising efforts, Clapham said.

More states should do this.

Lakeshore Public Media on November 13 launched “Neighborhood Voice” to spotlight minority-owned local businesses in what President and CEO James A. Muhammad said is one of the most diverse, but segregated, counties in the Northwest Indiana.  The stories air as interstitials during the newsmagazines and, in longer form, as podcasts.

The idea, however, did not come from the newsroom. It was pitched by the local community foundation, the Legacy Foundation, which sponsors the content, identifies the guests and hosts the interviews. The station does the production. The foundation agreed to underwrite the interviews for a year.

Muhammad says that for his small station to do content, it has to have partners.  He sees the project as a public service to “get the message out to the broader community.”

“The community needs to be more aware” of the local business owners and entrepreneurs, Muhammad said. 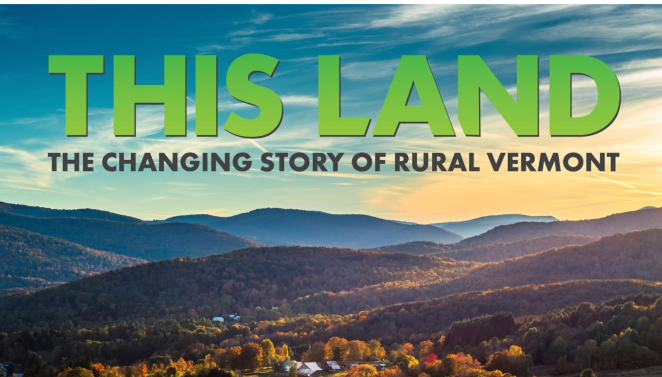 On September 9, Vermont Public Radio and Vermont PBS, both healthy public broadcasters, announced they would merge because they could do more together than apart. The merger needs an FCC OK and IRS approval of a new tax-exempt status; the combined newsroom is not expected to launch until next July 1.

While statewide news will benefit, VPR’s President and CEO Scott Finn, who will lead the combined enterprise, said he most aspires to cover better the stories the community identifies as important to them. He pointed to the station’s effort at unpacking a meta-narrative about the state’s urban-rural divide, as reported in “This Land.”

At issue are things like extreme poverty among rural residents and the future of farming in the state.

He sees the new organization engaged in much broader and frequent outreach to citizens to elicit: “What stories do you need from us? What stories can we tell?”

The efficiencies of the merger are not just about money, but also creating more service to the community, he said.  To that end, he said, “I think Vermont is turning into a real model of what journalism can be in the future.”