On Friday, March 5, “PBS NewsHour’s” David Brooks was given three minutes of airtime to assert that his paid position at a nonprofit did not create conflicts of interest with his paid positions as a New York Times columnist and as “NewsHour” commentator. Nevertheless, he said, “I understand the concerns” and we are “going to make some changes.”

While his “NewsHour” remarks tried to check the right boxes, I found his defense to be less than satisfying. And, after the fact, he had to correct the record to say that the nonprofit, The Aspen Institute, had not made all its donors public in a timely fashion, contrary to what he said on air. The segment didn’t prompt any questions from anchor Judy Woodruff.

It did raise a bunch of questions in my mind, however. Among them:

Brooks asserted that his activities “didn’t affect my journalism.” However, his audiences were never informed that he actually had a financial interest, a full-time salary, in a pet project, Weave, when he mentioned it or its funders, which included Facebook, in his journalistic work.

Brooks has since ended his paid position at The Aspen Institute, which housed Weave, although he will continue as a volunteer on that project.  The New York Times said it is going back and adding disclosures to columns where he wrote about Weave or Facebook.

The Times issued a statement Saturday that Brooks’ editors “have concluded that holding a paid position at [Aspen] presents a conflict of interest for David in writing about the work of the project, its donors or the broader issues it focuses on” and that he has resigned from the organization. 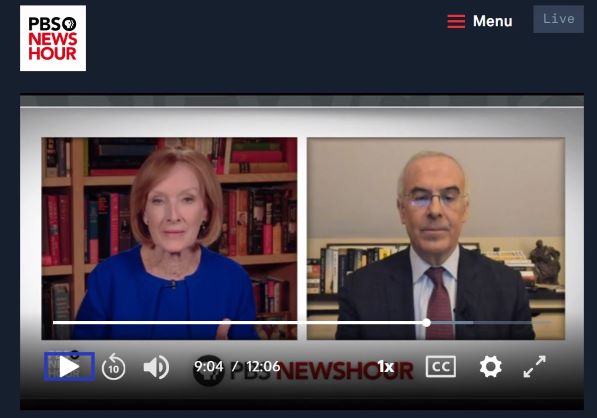 “NewsHour” spokesman Nick Massella said that while it has a policy to disclose the appearance of a conflict of interest, “We do not feel the segments we’ve aired about the work being done by The Aspen Institute and the Weave Project have warranted such disclosure. If David Brooks is asked to comment on our air about Facebook in the future, we would disclose then.”

Controversy over Brooks’ conduct first surfaced when BuzzFeed disclosed on March 3 that Aspen paid him a full salary to be executive director of the Weave project.  Several funders supported the project, including Facebook, which donated $250,000.

BuzzFeed reported that Brooks “has published multiple columns that promote Weave, in addition to writing pieces that mention Facebook, its founder Mark Zuckerberg, and the company's products without disclosing his financial ties to the social networking giant.” Adding complications, Brooks has also blogged for Facebook’s corporate website; it’s not clear that he was compensated for that.

The growing trend of journalists, especially celebrity journalists, holding multiple paid gigs is disturbing. I can understand how a cable program might want to have a guest journalist discuss particularly enterprising or investigative work. But it’s harder to understand how a columnist hired to create exclusive content for one news organization should also be a commentator for another.

And it’s mystifying how journalists – in this era of 24/7 news developments – can manage to report and produce breaking news while also being a regular talking head on various news programs. I know that it enhances their personal brand. And I have to assume their primary employers think it boosts the news organization’s brand as well.

But it is all too easy for commentary to take new directions when repeated for other outlets. And a journalist’s simple recounting of news developments can morph into commentary laced with opinion when freed from editorial oversight. Moreover, these journalists are often joining panels that include activists and leaders of advocacy groups, which has got to be confusing to viewers.

When editors know that one of their journalists has multiple gigs, it’s their responsibility to be sensitive to any minefields. Their radar should be on high alert for the need for transparency. In Brooks’ case, there are ample examples of journalists disclosing conflicts. The Washington Post regularly makes clear to readers that Amazon founder Jeff Bezos owns the Post whenever the paper writes about the company.

Why did Brooks get off with just his knuckles rapped and the opportunity to come clean?  Maybe he’s just a nicer guy than the surly New York Times science reporter Donald McNeil, who was forced to leave his 40-year career amid complaints about his discussions with students on a 2019 trip to Peru. Or he has a lower profile than James Bennett, who resigned as Times editorial page editor last year after publication of an op-ed by conservative Sen. Tom Cotton urging a military response to quell protests of racism in law enforcement around the country.

All in all, it gets tough to figure out what the rules of the road actually are.