Did you know that Associate Supreme Court Justice Clarence Thomas has written more than 600 opinions – 30% more than any other justice on the court?

It is one fascinating thing you will learn about this enigmatic justice, who has been on the bench more than 28 years, from watching “Created Equal: Clarence Thomas in His Own Words.” This documentary aired on PBS on May 18 after a January launch in regular theaters. It streamed online at PBS for an additional two weeks, ending this week. 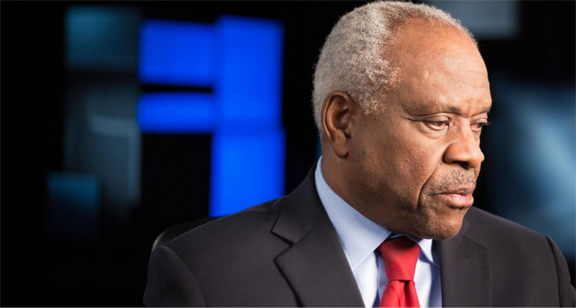 "Clarence Thomas: In His Own Words" aired on PBS.

But you will not learn why he is so prolific: Not whether his views represent a majority on the bench, or whether his colleagues trust him the most, or whether he’s the most energetic, or whether it’s just because he has just been there a long time, or whether many of those opinions are dissents accompanying a ruling opinion. Or something else.

That’s because the only people who say anything in this production are Thomas and, sometimes, his wife, Virginia  ̶  who talk straightforwardly for some two hours, occasionally prompted by gentle questions from an off-screen interviewer.  Thomas at times chuckles at some of his life’s stories.

We don’t hear any insights from Thomas’s legal colleagues, from his law clerks, from his mentors, from political associates, from other family members or close friends or historians. Or critics, of which there are many. Nothing that adds context or a fuller understanding of a complicated man who has all-too-often been caricatured in ways he clearly despises. And, perhaps, justifiably so.

But leaving all that out was deemed worth it to hear from the low-profile Thomas. The failure of the producers to paint a more textured picture is unfortunate. The failure of PBS to require this kind of context appears, to this ombudsman, to overtly violate PBS’s published Editorial Standards and Practices. PBS does not produce its own programming. Instead, it sets out standards for producers to qualify for PBS distribution. Those standards call for accuracy, including “context for facts,” and “fairness” that calls for producers to “consider all relevant facts and perspectives on a particular subject and present information in a respectful and responsible manner.”

Michael Pack, a conservative filmmaker and former head of a right-leaning think tank, produced the documentary. It was funded by a consortium of supporters who frequently fund libertarian or conservative activities, including the Charles Koch Foundation, the Sarah Scaife Foundation and the Diana Davis Spencer Foundation. It is up to the audience to assess the documentary’s editorial independence.

PBS’s Editorial Integrity and Transparency guidelines call for producers of content distributed by PBS to disclose all sources of funding so the audience can independently evaluate the credibility and trustworthiness of the work and whether it is “free from undue influence from third-party funders, political interests and other outside forces.”

PBS said it had received some complaints and some praise for the documentary. One viewer complained to CPB: “I can't fathom the one-sided piece of blatant advertising for Clarence Thomas, that you decided to broadcast … The Koch brothers fund it, get a conservative ideologue to write, produce and direct it. Wow. Then YOU show it? It's shameful. You have sunk to a new low, PBS. One thing is for sure   ̶̶  it's in HIS WORDS, alright!! (And his wife's). Nobody else 'good' enough to interview ABOUT Thomas?”

In a Baltimore Sun article, Pack is quoted as saying that he decided against making a more traditional documentary that would have entailed interviewing a wide range of people because “it would take a lot of people on all sides to deal with the many things that come up from affirmative action and busing to the Anita Hill charges themselves. And I thought I would lose Clarence Thomas’s voice."

“So, I thought it was better to have him tell his story,” the filmmaker said. “And it’s ‘Clarence Thomas in his own words’ so we don’t hide that fact. It’s not pretended to be the objective truth about his life. It’s his subjective truth. And I think because we’ve made essentially that deal with the audience and we stick to that deal, the film has integrity.”

“The film is a point-of-view documentary, and the standards specifically allow for opinion and commentary from a particular perspective.”

“It’s a rare opportunity to hear directly from a sitting Supreme Court Justice. Considering that his decisions and opinions have the potential to affect the everyday life of most Americans, PBS believes our viewers might be interested in learning more about his thinking and worldview,” she said.

I can understand how PBS, which is frequently criticized for demonstrating a liberal bias, would want to air an untold story about this African-American man’s up-by-the-bootstraps journey, his conversion from the political activism of the 1960s to Reagan conservatism, and ultimately elevation to the nation’s highest court.

The arc of Thomas’s life is compelling. Born to poverty in Georgia, he was raised by a mostly illiterate but profoundly moral grandfather. For a time, he studied to be a Catholic priest. In college, after leaving the seminary, he became a 1960s radical who gravitated to the activism of the Black Panthers. Then after the death of Martin Luther King and Bobby Kennedy he said he came to rebel against the “social engineering” of the Democratic Party, which he felt only enslaved blacks further to a life of government dependence. In 1981, he voted for Ronald Reagan and began to embrace a philosophy that opposed such things as affirmative action, rent control, welfare and busing. He became steeped in an originalist view of the Constitution as an antidote to what he saw as social policies that failed the black community.

Thomas demurs from calling himself an enigma. “I’m just simply different from what people painted me to be.”

Thomas has clearly been seared by his life’s journey. The film addresses matter-of-factly the sexual harassment assertions of Anita Hill at his Supreme Court confirmation hearings. Thomas’s decision to denounce those forces seeking to kill his nomination   ̶̶  in part alarmed that he would help overturn Roe vs. Wade   ̶  as “a high-tech lynching for uppity blacks who in any way deign to think for themselves,” is painted sympathetically.

But I, for one, wanted to understand more how his experiences made him want to be anything but a black man doing what a black man of his era was expected to do, a form of enslavement in his mind. A more nuanced study might tell us things that would enlighten   ̶  and ring truer   ̶  instead of confuse and mystify during these fraught times.  And it would have been more deserving of public airtime.