Don’t Diss the Candidates Before Their Time

Whichever candidates voters plan to support in the 2020 Democratic primary, they sure don’t like journalists writing any of them off before voters are ready to.

“Gatekeeper,” fortune teller,” “racist” were just a few of the objections raised in some 1,000 comments on Twitter after NPR Senior Political Editor Domenico Montanaro filed a Jan. 3 curtain raiser on the state of play in the month before the Iowa Democratic primary. His article was titled “With a Month to Go Before Iowa and New Hampshire, Anything Can Happen.”

One thing that did happen was that Montanaro excluded entrepreneur Andrew Yang in his recap, despite the fact that Yang had recently polled higher and raised more money – some $16.5 million in the fourth quarter alone ­– than other lower-tier candidates Montanaro mentioned, including Minnesota Sen. Amy Klobuchar and New Jersey Sen. Cory Booker.  The top four candidates, Joe Biden, Bernie Sanders, Elizabeth Warren and Pete Buttigieg, each got about 100 words in the article.

But making the situation worse for many “Morning Edition” listeners, Montanaro justified his exclusion of Yang in a subsequent tweet: “You have to have a path to the nomination to be considered a serious candidate. If you don’t have a credible, visible path you’re going to (sic) less attention.”

That prompted Cataclysm to reply under the handle @MathMe2020:: “There is an abhorrent statement coming from a self-proclaimed independent news source.”

To which Montanaro unfortunately responded: “bahahaha.” 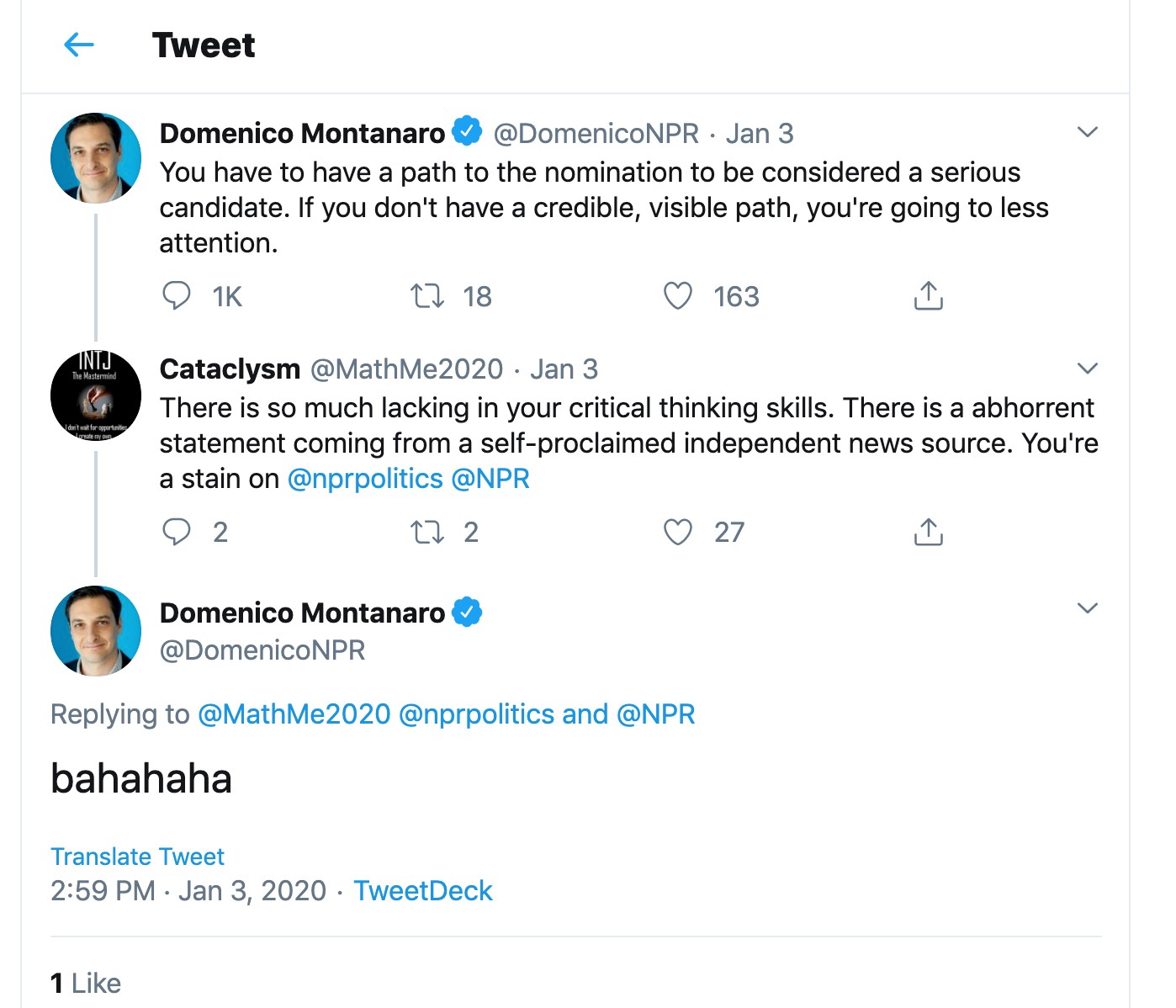 Montanaro’s initial tweet elicited some 1,000 comments on Twitter and emails to this ombudsman. A lot of the commenters were clearly Yang supporters, many of whom seemed to populate the demographic that NPR is seeking to reach.

“So does that mean he gets to decide how the elections will turn out? Is he seriously the gatekeeper of democracy?” wrote Victor Wong, in one of two complaints he submitted to this ombudsman. “How can he fail to mention the candidate that has raised 16+ mil in Q4 2019?”

Montanaro’s tweets, Wong said, “show complete disregard for American values and the pretentiousness to believe that his opinion solely dictates the discourse of American politics. This has angered over 1000 NPR listeners such as me.”

James C. Schnable, a listener of KUCV in Lincoln, Neb., wrote: “Airtime is certainly limited, and some things are going to get left out of stories, so I am not writing to you to express concern about the story itself, but about Mr. Montanaro's comments on Twitter subsequent to the story that he bases coverage on which candidates he personally believes have a path to the presidency and which do not.”

“This is quite concerning to me, particularly as it raises issues of both conscious and unconscious bias,” Schnable said.

He added, “To see Mr. Montanaro – in a public forum – dismiss the only candidate of color to qualify for the November debates as not a serious candidate, despite the metrics to the contrary, simply because he personally does not believe that person fits his notion of a president was disturbing and disillusioning, particularly given the high standards of journalistic integrity and consciousness of potential bias I have otherwise come to expect from the organization.”

Jaiden Backer @Jonodonozym was one of the Twitter commenters. He chimed in that it’s “up to the individual voters to decide, not for you (sic) railroad them towards your personal approved choices via your publications. Your lack of journalistic integrity and impartiality subverts democracy.”

@Vegans4Yang weighed in with: “There’s nothing quite like a gatekeeper standing before a set of closed gates telling someone standing in front of them they can't come through the gates unless they can go through the gates.”

An NPR spokesman said that NPR stands by Montanaro’s story, “which we believe was editorially fair based on his own reporting, polling information and analysis.”

If Montanaro had been doing “a longer and broader analytical piece, he would have included some analysis of Andrew Yang and other candidates, but it wasn’t critical in the story he wrote, which looked primarily at the top tier of candidates.”  He noted that Yang has been featured throughout NPR’s political coverage.

“Our ethics guidelines encourage reporters to interact with listeners on social media. If exchanges turn confrontational, we recommend disengaging so that we keep exchanges civil.  In this case, Domenico agrees that while his initial tweet based on his analysis and reporting was fair, it might have been better to stop engaging.”

Indeed. NPR’s social-media ethics policy specifically states: "Conduct yourself online just as you would in any other public circumstances as an NPR journalist. Treat those you encounter online with fairness, honesty and respect, just as you would offline. Verify information before passing it along. Be honest about your intent when reporting. Avoid actions that might discredit your professional impartiality. And always remember, you represent NPR."

Many of the Twitter commenters vowed to end their support of NPR.

Again, Montanaro chose to reply with one word: “Sad.” 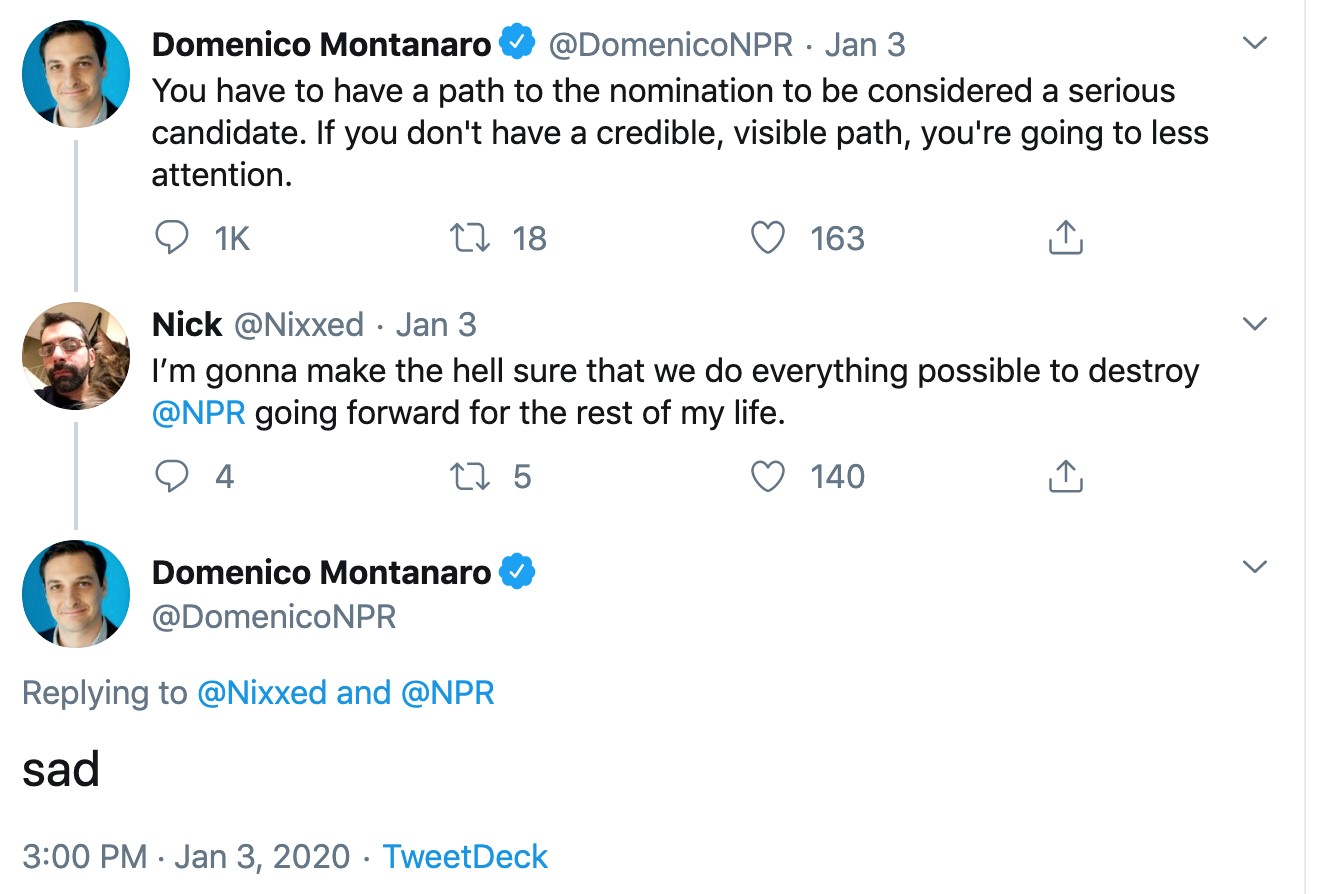 Yes, it’s very sad that amid a credibility and funding crisis in journalism, a journalist can’t refrain from childish rejoinders. Just zip your lip.