When Boston public-radio rivals GBH and WBUR last week launched their first collaboration to create a daily local-news segment for NPR’s “Consider This” national news podcast, they ended up agreeing to feature a story from GBH’s investigative team.

It was about how Massachusetts Governor Charlie Baker had inflated claims of spending with minority businesses, part of GBH’s ongoing “Color of Public Money” series.

“It ended up happening to be the best story” of the possible pitches that day, said Pam Johnston, GBH’s general manager for News.  So far, only stories that have already had some airtime on either station have been featured in the podcast, she said.

Going forward, sharing access to their most enterprising stories in daily editorial meetings may be a big gulp for these news organizations. “But it hasn't been as guarded or as competitive as people anticipated,” said Ben Brock Johnson, WBUR’s executive producer of podcasts. Although the stations are not – yet – sharing their future calendars for enterprise journalism.

But executives of both partners recognize that the podcast’s new local segment has to feel fresh and deep within a 24-hour window.

The two Boston pubcasters are among 12 stations that are partnering in a unique effort to insert daily local news into a daily national news podcast. The local news segments run about 5 minutes; the podcast’s national news runs for about 12-13 minutes. NPR, in announcing the initiative on September 9, hailed it as “first localized news podcast.” 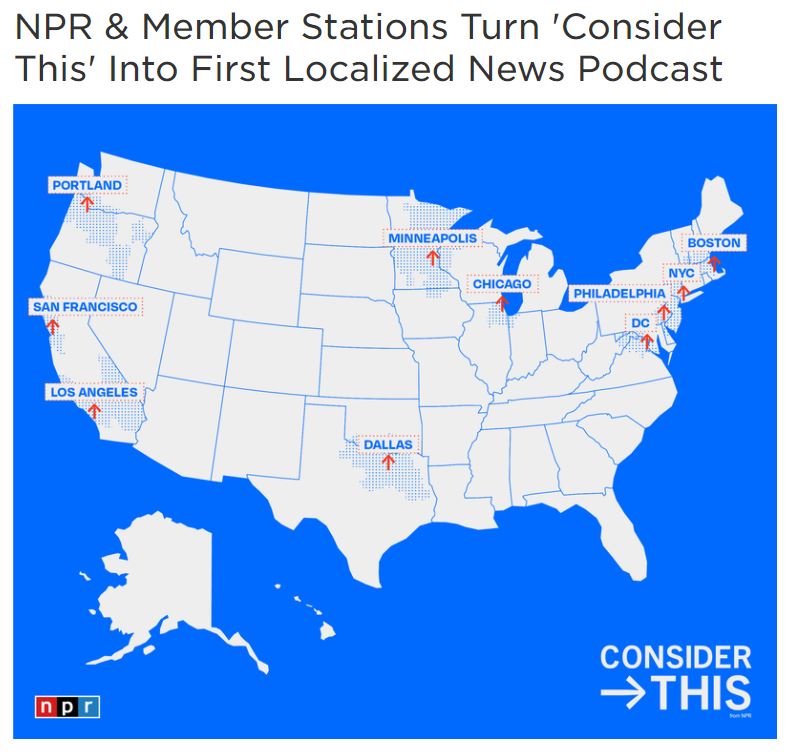 At the launch, listeners in 10 of the nation’s larger public media markets – about 30% of NPR’s audience ­– hear the national/local podcast that runs for about 18 minutes. The other 70% get the shorter podcast with just the national news, said Neal Carruth, NPR’s senior director, On-Demand News Programming. Only Boston and Los Angeles have two local stations in the initial cohort group.

Carruth and Stacey Goers, NPR’s senior product manager, Podcasts, expect more stations will want to participate when they grow the partnerships next year.

For now, all parties express excitement for the experiment and are test-driving the idea, down to the music that integrates the parts into a whole. “This has never been done before,” Carruth said.

Local partners can either repurpose stories they have already aired or create new content for the podcast. And they can monetize the podcast through local sponsorships. “We set this up in such a way that stations can sell local sponsorships against their local content,” Carruth said. “They are all doing that.” The stations can also cross-promote other programming or include membership messages. “They have total control over their block of time,” he said.

Integrating the various local segments, for now, is happening through Adswizz, an audio advertising platform that traditionally geo-targets 30- to 60-second sponsorship notices. But NPR discovered it also can handle the 5-minute geo-targeted local news content. “We realized that it’s something we could launch with,” Goers said.

The idea for a national podcast customized with local news has been bandied about for a while, Carruth said. “Consider This,” which launched as a pop-up coronavirus podcast last spring, was deemed the prime experimental venue as it transitioned to a new future. For one thing, it was an afternoon podcast, available at about 5:30 p.m., which can accommodate new daily stories, and it already had an existing audience. “We pulled in station partners to work closely with us. It wasn’t NPR dictating,” Carruth said.

Johnson says that WBUR sees this podcast as an “innovative” product that aims to see whether there is a podcast audience for this kind of national/local content “in the way that we know there is a broadcast audience.”

He can envision, for instance, possibly building texting groups around the podcast to deliver direct links to the show’s content, if people want to share it, or to allow them to offer feedback.

Right now, NPR is preserving the local content until it figures out how to archive it, Goers said.

“We are thinking of it as the beginning of something, not the end of something,” Carruth said. Moreover, the partners recognize the potential value of adding the local content as news deserts keep growing around the nation.

Just imagine if more on-air as well as other on-demand programming had regularly scheduled blocks of local news ­– ones that audiences could count on to be there for them?