New research findings targeting journalism credibility and sustainability have caught my eye in recent weeks. I share them here because they suggest some new roadmaps for public media and the future.

So it’s considered easier to get support for local journalism in affluent communities, but many communities just don’t have deep pockets or local foundations to tap. The good news is that a recent data analysis from Report for America, which has placed reporters in some 165 local newsrooms and pays half their salaries, came up with “what may seem like a surprising finding,” wrote Lauren McKown for Poynter. She is vice president of development and communications for its parent, The GroundTruth Project. 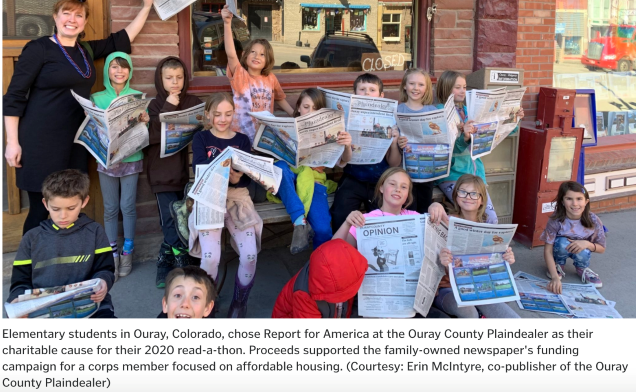 In short, fundraising for news outlets in communities at the top of the national poverty index was virtually the same as those in wealthier communities. “We were floored,” she said.

In 2020, R4A media partners raised nearly $5 million to support their reporters, “mostly from donors who had never given to journalism before.” And its partners raised 61% more per reporter than in the previous year.

“Time and time again, we see that small donors give more proportionately to their income than their wealthier counterparts,” McKown wrote. “In our data set, we saw that individual donors made up nearly half of all dollars raised; the vast majority of those grassroots donors gave under $100. This is a promising trend in local news, especially for a cause that has been primarily funded by national foundations to date.”

Many of the gifts to the newsroom partners come with a specific reporter’s name tied to them, she said, signaling that relationships with your audiences are important.

That’s something to think about – and maybe something to crow about – if you have a reporter connecting with the community.

Values Mismatch:  Journalists and the Public

Intriguing research from the Media Insight Project begs the question of whether journalists should be writing for other journalists or for a broader base of news consumers.

In short, the research found that not all news consumers value the watchdog role that propels most journalists to their calling. Nor do they agree with other core journalism values as much as journalists do. For instance, there was the least support (29%) for the idea that it’s necessary to spotlight a community’s problems in order to make a community better.

Only one of the five values tested won a majority of support among those surveyed: A majority of respondents (67%) agreed that the more facts people have, the closer they get to the truth.

For instance, when testing different headlines and different leads of news stories, the researchers found that reporters could actually broaden the appeal of the news they were trying to convey if they took deliberate steps to address readers’ moral values.

“Our experiment tests what might happen if journalists think about the values of their most skeptical readers when composing stories,” according to a synopsis of the report. Some of that work can be done by simply re-framing a story or re-writing a headline, the researchers concluded.

In one recounting of the mismatch, the researchers said that Americans who value loyalty and authority tended to be the most skeptical of the news media. Whereas journalists tended to be generally suspicious of authority and cautious about excessive loyalty, believing people in power need to be watched.

The report, “A New Way of Looking at Trust in Media,” is a collaboration of the American Press Institute and the AP-NORC Center for Public Affairs Research.

Another study that explored a database of COVID-19 coverage from every major network found, perhaps no surprise to viewers, that journalists are biased toward bad news. In COVID-19 coverage, in particular, researchers found that the media tended to report stories that emphasized instances where cases were rising, even if they were falling elsewhere.

“The most well-read U.S. media are outliers in terms of their negativity,” Molly Cook, a co-author of the study, told the New York Times.

About 87% of COVID coverage in national U.S. media last year was negative. The share was 51% in international media, 53% in U.S. regional media and 64% in scientific journals.

“The media is painting a picture that is a little bit different from what the scientists are saying,” said Ranjan Sehgal, another co-author.

A PBS Untethered to Broadcasting?

Finally, some good news in a report from the Tow Center for Digital Journalism on trust in PBS. While that trust is generally high, viewers said one of the things that enhanced their trust was when their local PBS station provided local news coverage.

But the researchers said PBS needs a greater financial commitment to produce both local and national news programming, and it needs to be “untethered to the medium of broadcasting to meet the needs and demands of a digital audience.”

This report marks the end of my three-year tenure as CPB Ombudsman. Thanks to all for your feedback and suggestions.