The Headaches of Streaming PBS Programs

Whew! Who knew how complicated it would be to access live PBS programs when you opt out of cable television.

I’m not a full-blown cord-cutter – yet. But I didn’t want to cover two cable bills in two different states after we added a summer home. First, I decided to test-drive streaming all our TV viewing in the new place.

I quickly realized that PBS is not a “channel” option on popular subscription streaming services such as DIRECTV, PlayStation Vue or Hulu (more on this later). I could get old episodes of "Downton Abbey" with my Amazon Prime membership, but not a live daily fix of "PBS NewsHour." I could also access some other PBS programs on Amazon Prime – for a price.

But an Amazon Prime search for the Ken Burns "Country Music" documentary that has aired over the past two weeks offered up only a playlist of the top 100 country songs on Amazon Music. I searched some more.

It’s not surprising then that a popular search query for accessing PBS content, which you expect to be free and easy to get, is quite simply: “How to watch________?” 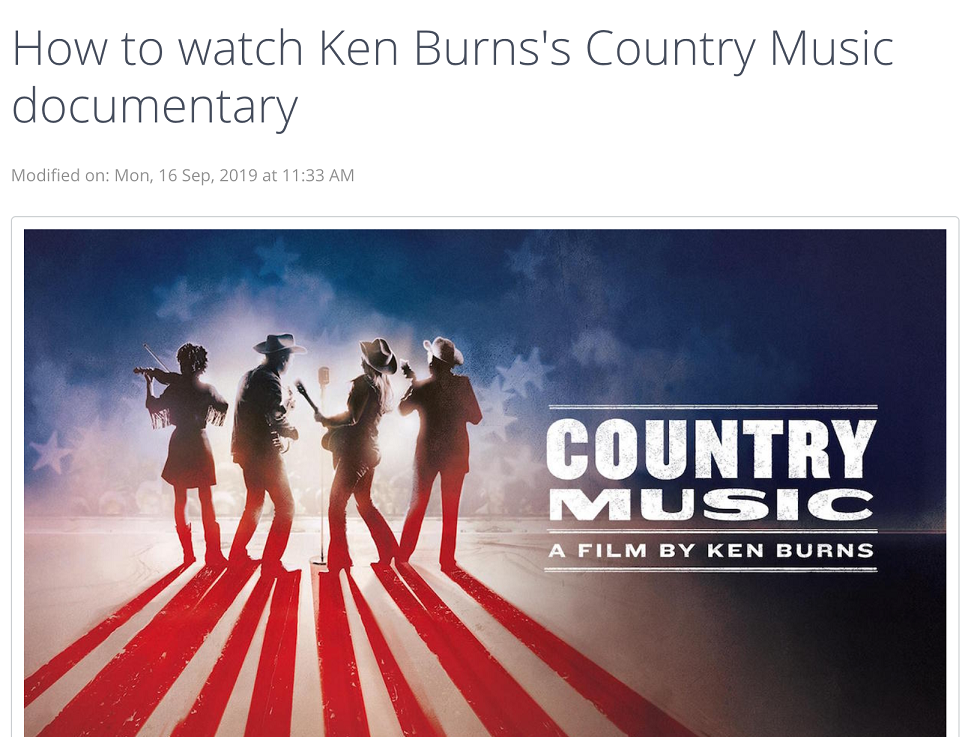 From there, you can get many tutorials. Not a cable or satellite subscriber? PBS will explain how one can pursue a popular and inexpensive option: watching free, over-the-air TV with an antenna or rabbit ears. Don’t have a smart TV?  You will need a device to make it smarter (think Roku, a Fire TV stick or a Google Chromecast to allow access to online programs). Want to watch a live program? You can go to the PBS.org and view it on the website. Or watch it on your local PBS affiliate’s website. Or watch it on your cell phone. Of course, you have to have Internet access. But don't tarry. New programs may only be available for a couple weeks before they disappear.

In other cases, you might not be able to see the program right away when it’s first broadcast. Many PBS programs are not available for online viewing until the day after they air.

Then there are the apps.

After viewing the first episode of "Country Music" on my laptop, I downloaded the PBS Video app. Then to my surprise I had to hunt and peck to find the highly promoted documentary.

In researching how to watch the "NewsHour" on TV, I spent part of my summer watching it, as directed, on YouTube TV – except for a handful of episodes that did not seem to get uploaded on the day of the newscast or, at least, were not surfacing in any searches.

Then I discovered that there was also a PBS NewsHour app.  There’s a PBS KIDS app. And many local PBS station apps.

And, if you donate at least $5 a month to most PBS stations, you can get PBS Passport, but that will give you access only to programs that have been archived. “There is no live streaming in Passport,” said PBS spokesperson Jennifer Byrne. But PBS Passport does give you the option to watch archived programs over a longer time frame. For instance, you can view "Country Music" into February 2020, while episodes on PBS.org will start disappearing in October.

For now, aside from watching a PBS broadcast over the air, “the PBS Video app is the best way to watch PBS content on a television set,” Byrne said. Viewers can watch everything live and even binge-watch multiple episodes of some programs. It does not require a subscription, only a device such as a Roku, Amazon Fire, Chromecast or Apple TV, that will allow the content to be delivered via an internet connection.

To be sure, PBS has been trying to solve these problems for years, and there is renewed urgency as streaming seems to be where television is going. “By the end of the year, PBS will be available via YouTube TV in at least 75% of TV households,” said Byrne. “We hope to have 100% coverage by early 2020.”

Complicating all this is the fact that PBS does not own most of its programs. They are owned by their producers, who often need to continue to monetize them through other distribution deals after they are broadcast. Any rights to broadcast, stream, distribute or archive them must be negotiated individually.

CPB is in the process of exploring ways to change the contract language in its program-production grants to secure rights that will ensure that CPB-funded programs continue to be available for digital viewing, said Maja Mrkoci, CPB’s chief content and innovation officer. “Our goal is to make sure that content is available for free.”

Further complicating things, public TV stations around the country are individually owned, usually by a nonprofit community organization or a university. In addition to buying PBS and other national programming, they produce their own local programs. That means that any rights to stream that local content must also be separately negotiated.

In the process, local pubcasters assert that it is paramount that there be a way for them to solicit and receive donations from viewers who watch via streaming. That’s why you are asked to identify your local PBS station when you go online.

Here, too, there can be disconnects.  For my summer on Cape Cod, I’ve been geo-assigned to a station in Boston, which means I must either change it to my home station in Washington, D.C., or be prepared to be asked to donate to a station I don’t watch.

It’s enough to make you want to just pay the cable bill.