Kudos to The PBS NewsHour for Friday’s dogged reporting on accusations made by Tara Reade against former Vice President Joe Biden, the presumptive Democratic presidential candidate.

It was a textbook-journalism example of how reporters can – and should – keep pulling new threads on he said/she said assertions, in this case whether Biden sexually assaulted Reade in 1993. Biden has categorically denied the charge. In its reports, online and on the air, The NewsHour confirmed some information and added some fresh details.

To be sure, other journalists have been trying to ferret out the truth about what Reade said happened 27 years ago, employing various reporting techniques. They have focused on interviewing the handful of 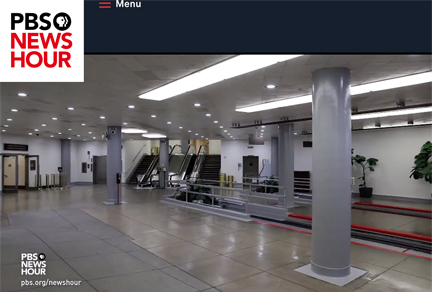 PBS NewsHour shared images of the walkways under the U.S. Capitol.

people who say they heard her later describe the incident. One Vox journalist chronicled how difficult it has been to nail the truth and how it left her “mired in a miasma of uncertainty.” A Politico reporter interviewed people in California who said Reade was manipulative and deceitful and left them feeling aggrieved.

The NewsHour’s congressional correspondent Lisa Desjardins and political reporter Daniel Bush, however, traveled new terrain. With extensive shoe-leather reporting they tried to reach some 200 people and managed to interview 74 former Biden staff members, three times more than were interviewed for an April 12 New York Times story.  Of the 74, 62 were women. More than 20 worked for Biden during the nine months that Reade also worked in his Senate office.

Not everyone remembered Reade. No one said Reade should not be believed, and they said their experiences do not disprove Reade’s accusations. But they did say her allegations of sexual harassment and assault were at odds with their individual experiences or the culture in Biden’s Senate office, casting doubt on Reade’s claims that it was a toxic place to work. Reade has also said she was ultimately pushed to leave because of her complaints.

“None of the people interviewed said that they had experienced sexual harassment, assault, or misconduct by Biden,” the NewsHour reported, “All said they never heard any rumors or allegations of Biden engaging in sexual misconduct, until the recent assault allegation made by Tara Reade.”

The reporters also videotaped the very-public Senate complex passageways where Reade has alleged that Biden assaulted her. Overall, the report garnered more than 530 online comments. “I thought this felt like a very fair and careful write-up, both of what you found in your investigations and the overall situation. That probably means that lots of people will attack it from both sides, but good job anyway,” wrote one viewer.

Other commenters derided the report, asserting The NewsHour did not do the same kind of reporting to gauge accusations against then-Supreme Court candidate Brett Kavanaugh.

But I would join in New York Times columnist and NewsHour analyst David Brooks’ observation that “real skepticism has to be a little higher because of this reporting.”