In a week when several of the nation’s largest public radio stations laid off staff and shuttered programs and podcasts, Southern California Public Radio took a different turn. It launched the first of at least four place-based podcasts it will release this year. 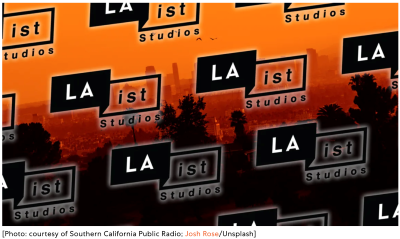 Two more are in “active development,” said Herb Scannell, president and CEO of SCPR, home to KPCC and the LAist local news site.

The new podcasts aim to convey to the world the particular essence of a “fascinating” city that is not only a creative-arts capital but is also a majority-minority city in transition with important stories to tell, Scannell said.

They are also a prime example, in these days of growing local-news deserts, of a news organization that identifies and pulls the threads on the master narratives that make its community unique – a media content strategy too few follow these days.

The new podcasts are the work of LAist Studios, a podcast development and production shop SCPR launched just a year ago to create original podcasts with voice of Los Angeles. Its initial efforts won accolades: TIME named “Tell Them, I Am,” an exploration of the lives of Muslims through small defining moments, one of 2019’s best podcasts. New York magazine’s Vulture named “The Big One,” a nine-part series examining how L.A. would react to a San Andreas fault earthquake, one of the best podcasts of last year. “It’s an L.A. story that the world is kind of curious about,” Scannell said, noting that it became the “impetus and inspiration for what we want to do.”

SCPR acquired the local news site LAist in 2018. It opted for the LAist Studio brand, instead of KPCC, to boost the appeal to a younger, more digital audience. In Scannell’s view, LAist Studios is an effort to “open the aperture” on opportunities to reach new public radio audiences.

Of special interest are stories that unpack the diversity of L.A. and the nation itself, said Scannell, whose mother was from Puerto Rico. “Capturing racism in a diverse America is powerful,” he said.

“Executives are often driven by mission to make choices  ̶  either to do what is being done in the market because it works, or to make [other] choices,” Scannell said.  He sees podcasting as a disruptor of analog radio.

“My view on podcasting is  … it’s a necessity, especially for the next generation of public radio listeners."

In soliciting podcasting ideas, “We told people what we wanted, and people came to us and told us what they wanted,” Scannell said.  “The best storytellers in the world are based in L.A.”

Scannell said SCPR talked to agents, podcast production studios and the public radio community and has received some 200 pitches to date. Helping to refine ideas and oversee development is Angela Bromstad, former president of primetime entertainment for NBC and Universal Television Studios.

LAist Studios is one of Scannell’s first major initiatives since taking the helm of SCPR in 2019.  He is a longtime cable TV vet and was previously a member of the New York Public Radio board for 18 years, serving as chairman from 2009 to 2013.

In making the leap into podcasting, he said he sought advice on whether it was too early or too late for such a move. He said Quah told him, "You’re not too late. You’re in L.A., where the business is going to be.  And a lot of people want to be aligned with public radio.”

Fueling LAist Studios are contributions from listeners led by $1.5 million from former SCPR board chairman Gordon Crawford, but Scannell said the goal is to be sustainable with revenue over time.