KPCC and LAist.org are responding to more than 1,100 audience questions in the Los Angeles area. NJTV is allowing news sites around New Jersey to embed its broadcast newscasts and the governor’s coronavirus press briefings that are uploaded to YouTube. And Twin Cities PBS is translating its programming to Hmong, Spanish and Somali.

Public broadcasters, like these, around the country are meeting the COVID-19 reporting challenge with an array of initiatives: Dedicated blogs, special broadcasts, new collaborations, suspended pledge drives and dozens and dozens of learn-at-home programs for kids barred from schools. All deserve a pat on the back.

Here are a few things that have caught my attention. 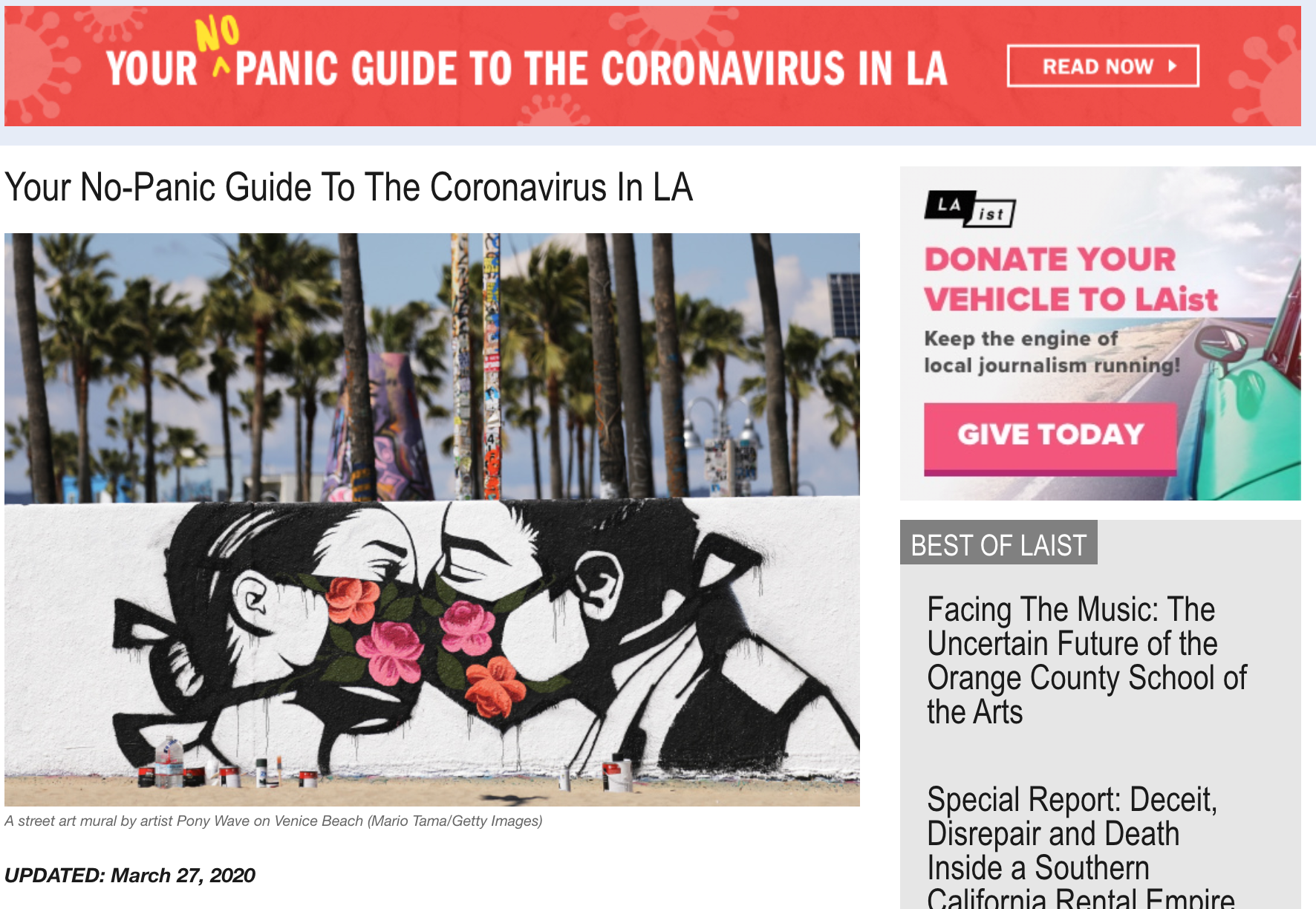 KPCC's LAist digital news website has received more than 1,100 questions about COVID-19 and provides answers on a user-friendly website.

Audience engagement staffers at KPCC and its local website LAist.org have received more than 1,100 questions from readers and listeners and, as of Friday, had personally responded to some 700 of them, tweeted Ashley Alvarado, director of community engagement for the outlets. You can find the answers on a particularly user-friendly LAist.org web page here. Likewise, KQED in San Francisco said it has collected some 1,500 questions from listeners.

America Amplified, the Election 2020 public media initiative  funded by CPB and spearheaded out of KCUR in Kansas City, has curated and pooled an array of audience questions and answers from health experts interviewed by its network of some 50 pubcasters. You can access them here. Ohio’s ideastream partnership has also published a useful Q&A page.

Hearken is offering tutorials and special deals for four months to media outlets seeking to use it engagement platform to interact with audiences on COVID-19 coverage.

While public broadcasters are not widely known for sharing their content with commercial or other nonprofit news outlets, the presence of often-daily updates from state governors and other officials are opening the doors to new sharing opportunities. This is especially helpful to boost COVID-19 coverage at local news sites that have had to lay off journalists because their advertising and event revenue abruptly evaporated with business closures.

NJTV, New Jersey’s public television network, offers embed codes for its weeknight newscast posted to YouTube, as well as to its Facebook livestreams or videos, so that any New Jersey media can add that content to its website. That includes content from its sister newsroom NJSpotlight, which is now making all of its COVID-19 statewide reporting  available for local news organizations to republish.  Access to these robust content streams is being touted by the Center for  Cooperative Media at Montclair University.

“NJTV News has made its online content embeddable for years. We consider it part of our mission to serve the public,” said Debbie Falk, NJTV’s director of communications.

In Minnesota, content from Twin Cities PBS in the refugee-resettlement areas of Minneapolis/St. Paul is not only being carried by PBS stations throughout the state, more than 90 commercial radio and television stations are also picking up its expanded weekly public affairs program.

Ideas are not limited to public media news coverage. Music stations are doing some new things.

For a uplifting idea that could be expanded, WJTU, the University of Virginia music station in Charlottesville, Va., has partnered with The Bridge, a local arts nonprofit, in inviting listeners to record and upload their own Quarantine Haikus. (Hat tip here to Current magazine for its list of pubcaster activities.)

Boston’s classical music station WCRB last week began presenting past performances of the Boston Symphony Orchestra at 8 p.m. most evenings. It’s believed to be ”the first time an American radio station and its hometown orchestra have created such an extensive broadcast partnership,” the station said in a survey response to Current magazine.

For pubcasters looking for more ideas, the American Press Institute has developed a list of free content, tools and funding that can be accessed.

Useful participation opportunities and extended content sharing are win-wins for all.