What’s Next for Journalism That Survives COVID-19?

Never before has there been such a collective cry for the federal government to fund journalism ­­­­– especially local newsgathering – an idea that reporters and editors once considered toxic.

These calls have come over the last two weeks from respected industry leaders seeking to staunch the current carnage in commercial and nonprofit newsrooms. Ideas that once were regarded as controversial are now treated as possibilities to be pondered – and actively pitched.

Indeed, just Wednesday, more than 50 journalism organizations and journalism schools sent Congress a letter pleading for $5 billion in relief in the next emergency legislation, saying the pandemic has “accelerated the decline of local news and information.”

If these pleas gain traction, public broadcasters will have newfound competition for taxpayer dollars, even as digital news providers are already homing in on pubcasters’ donors, members and funders. Some of the proposals call for markedly redefining public media to embrace a broad spectrum of nonprofit news organizations, not just public radio and television ­ – a change that would require new legislation.

The coronavirus pandemic has created a confluence of events that has amped up the urgency. Just as local newspapers have been supplying round-the-clock news and public-safety information, their newsrooms have been eviscerated as advertising from retailers, restaurants and car dealers evaporated overnight. Dozens of newsrooms, including at the nation’s largest newspaper chains, have had to cut their print editions, reduce salaries, furlough staffers or cut staff entirely.

At the same time, public broadcasters are seeing their underwriters pull back, their donors squeezed and their philanthropic supporters confront both decimated assets and increased competition for support.

For now, Congress has provided public broadcasters with a $75 million infusion, especially to help small and rural broadcasters that lost non-federal support.  In its request to Congress, the Corporation for Public Broadcasting (CPB) estimated that pubcasters could lose more than $200 million in FY2020 revenues over six to eight weeks.

While these funds are not quite in the pipeline yet, public broadcasters across the country have upended their usual programming to provide news and public safety information. As important, public television stations, which generally provide little local news, have taken the idea of public education to a whole new level. PBS stations and statewide networks in at least 37 states have totally reprogrammed their daily offerings to air K-12 learning opportunities for homebound kids. They are working with state Education Departments and drawing on deep PBS Learning Media offerings.

It’s a major affirmation of the value of public broadcasting, and it’s hard to see how anyone could be unhappy about these efforts. Still, some conservatives, like Rep. Jim Jordan (R-Ohio), would like Congress to claw back that relief money, calling it a “liberal pet project.” Former CPB Board member Howard Husock is one person calling for change. He asserted in an April 1 column in The Hill that Congress missed an opportunity in the relief bill “to fill the vacuum left by the decline of local journalism and information.” He said the emergency funding “merely helps preserve the public broadcasting status quo,” which involves significant pass-through funding to help local pubcasters pay fees and dues to national content providers such as NPR and PBS.

This Monday, applications will open for Facebook’s Project COVID-19 Local Relief Fund to give grants of $25,000 to $100,000 to struggling local newsrooms, as part of a $100 million Facebook Journalism Project.

The Knight Foundation has published resources for helping news organizations navigate Congress’s $2.2 trillion Coronavirus Aid, Relief, and Economic Security (CARES) Act and just hired a consultant to help independent newsrooms apply for that funding. The Institute for Nonprofit News has a resource page for nonprofit newsrooms that also covers the CARES Act and other newsroom funding opportunities.

Proponents of longer-term solutions, however, see the current crisis as making an incontrovertible case for the importance of journalism to civic life and public health. They are advocating both direct and indirect federal support for journalism.

In 2009, editor Len Downie and media historian Michael Schudson penned  “The Reconstruction of American Journalism” report and called for a National Fund for Local News, funded with FCC fees and surcharges. They also urged that public radio and television “be substantially reoriented to provide significant local news reporting.”

At that time, notions of federal support met resistance. Journalists believed they needed to be independent of government support or oversight so that they could be unfettered public watchdogs. Since then, some of those taboos have relaxed.  Here’s what some journalism thinkers are now promoting:

Sharing some similar ideas are Aaron, of Free Press, and Steve Waldman, author of the 2011 FCC report, “Information Needs of Communities.”  Now Waldman is co-founder of Report for America, which places needed reporters in newsrooms around the country. He outlined a menu of possible solutions in a March 31 CJR article, “Curing Local News for Good.” He urges the federal government to:

​Among other ideas, Waldman also urged that CPB’s budget be doubled, but with “structural reforms.” He called for less federal support for public television stations, which now get 75% of CPB funding, and more for public radio stations. He, too, said that CPB should morph into a Corporation for Public Media and that it should funnel some $100 million in federal funds to nonprofit websites.

If any of these ideas are enacted, public broadcasters will likely be affected. If I were now a public broadcaster, I’d start positioning myself for whatever the post-coronavirus journalism world will look like.  Developing a stronger local news portfolio and embracing local nonprofit news sites (as several pubcasters have already done) are two initial steps that would help bridge the past and the future.

'This Is Too Much': Working Moms Are Reaching The Breaking Point During The Pandemic

SDI Productions / Getty Images
The coronavirus did not create the struggles that working mothers face daily. But it has exacerbated them and made them more visible, forcing women of all income levels to make hard choices. 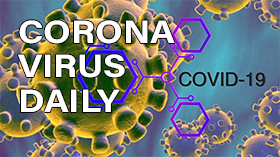 Both the Titans and the Minnesota Vikings – who played the Titans on Sunday — are now shutting down in-person club activities.

Kimberly Paynter / WHYY
Experts say the hotel industry may not return to pre-pandemic levels until 2023. Hospitality workers are bearing the brunt of this long downturn.

Evictions Damage Public Health. The CDC Aims To Curb Them ― For Now

COVID-19 Deaths Top 1 Million Worldwide. How These 5 Nations Are Driving The Pandemic

Citing a lack of adherence to guidelines, teachers in Little Rock, Arkansas, have refused to teach in-person classes. The district is considering firing them.

6 Months Into The Pandemic, What Feels Safe To You? What Are You Unsure About?

Octavio Jones / Getty Images
The Consider This team wants to know how you're making decisions six months into the pandemic. What are you comfortable doing? What are you still unsure about?

Baseball Made It, So Far, Through A Pandemic. Football Hopes To Follow

Hannah Foslien / Getty Images
After a rocky start to the Major League Baseball season, it's on to the playoffs. MLB has gone almost a month without a player testing positive for the coronavirus. The NFL hopes to replicate that.

John Moore / Getty Images
Plus, of all U.S. homes that include someone with a disability, 63% report serious financial hardship during the pandemic, and 37% have used up all or most of their savings.

Are professional sports ready to resume play amid the pandemic?

U.S. inmates got virus relief checks, and IRS wants them back

IMF downgrades outlook for global economy in face of virus