Who Really Stands for What?

In a presidential election cycle fueled by the media attention given to horse-race polls, candidate gaffes, misinformation, COVID-19 shaming, and a focus on swing states, it’s surprisingly hard to find candidate comparisons on specific policy proposals.

I know because I looked.  And looked.

I could find Biden and Trump stances compared in singular areas: foreign policy by the Council on Foreign Relations, education by the National Education Association, investing by Investopedia, and health care by the Kaiser Family Foundation.

But mainstream media have not excelled here. USA TODAY offers a breezy list of pull quotes. CNN has posted a text-heavy comparison that was hard to plow through. The Wall Street Journal’s list is behind a pay wall. The Washington Post offers a checklist on issues it selected and framed (and sometimes it seems like the candidates agree as often as disagree).  And the New York Times seemed to be missing in action, or at least missing in my various search results.

But there’s one exception: National Public Radio.  I found NPR’s Issues Tracker to be the most robust and useful comparison of what, specifically, each candidate has in mind (or doesn’t) across a broad spectrum of issues. It is presented in an accessible way. And I think it deserves more attention than it has received. When I share portions of it with my circle of media-savvy friends, it’s like it’s news to them. 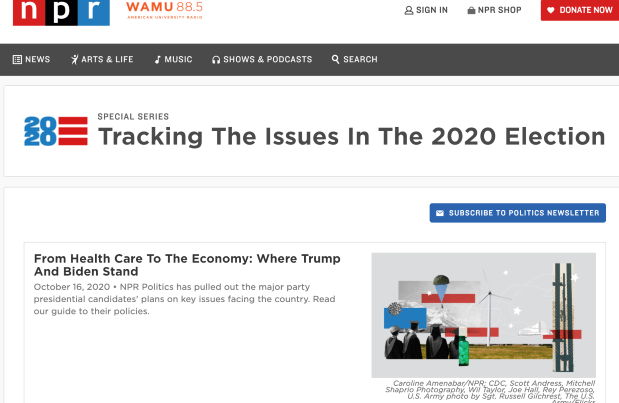 NPR’s Issues Tracker consists of a deep dive on 10 areas broken into separate sections, each written by journalists. Each issue has bullet points at the top comparing the two candidates with narrative elaboration below.  Notable is how much specificity there is in some of the Biden proposals – something news consumers might not see in daily political stories. Trump’s positions tend to consist of more sweeping bullet points, or as NPR notes, are “noticeably lighter on policy.”

Now, to be sure, most election stories mention a candidate’s stand on a particular subject if his opponent has misstated that position or lied about it. And, yes, you could go to the individual candidates’ websites to research policy positions.

But neither candidate seemed able, or willing, to pull the threads on their various plans at the first presidential debate. And now, as a Poynter Institute article pointed out earlier this week, Trump is employing a strategy to itemize, falsely, a long list of things that he says Biden plans to ban or destroy.

“The President has tweeted that Biden and Democrats ‘will kill your jobs, dismantle your police departments, dissolve your borders, release criminal aliens, raise your taxes, confiscate your guns, end fracking, destroy your suburbs, and drive God from the public square.”

Now Biden has also trafficked in some incorrect statements. Poynter points to PolitiFact’s scoring of the accuracy of both Biden and Trump comments as one way voters can assess a candidate’s plans.

But relying on fact checking after the fact instead educating citizens upfront with reporting on policy plans, and even analyzing those plans, seems like a backward form of campaign journalism to me.

If elections are truly an exercise in voters deciding who they want to hire to run their government, the candidates’ vision and thinking would be better shared in issues trackers that would help citizens clearly assess each candidate applying for the job. That should be part of journalism’s job, too.

Kudos to NPR. I wish more news outlets would do the same.