Fostering New Brands under the Mothership

Colorado Public Radio (CPR), which has been on a feisty campaign to beef up its news content, took another big step this week.

It boosted its local news coverage with its purchase of Denverite, a robust local news site that launched in 2016 and later joined two others operated under the Spirited Media umbrella.

“Denverite has become an important source of original journalism, serving a growing community need for news in Colorado’s largest city,” said CPR’s President and CEO Stewart Vanderwilt, in announcing the purchase on Wednesday. 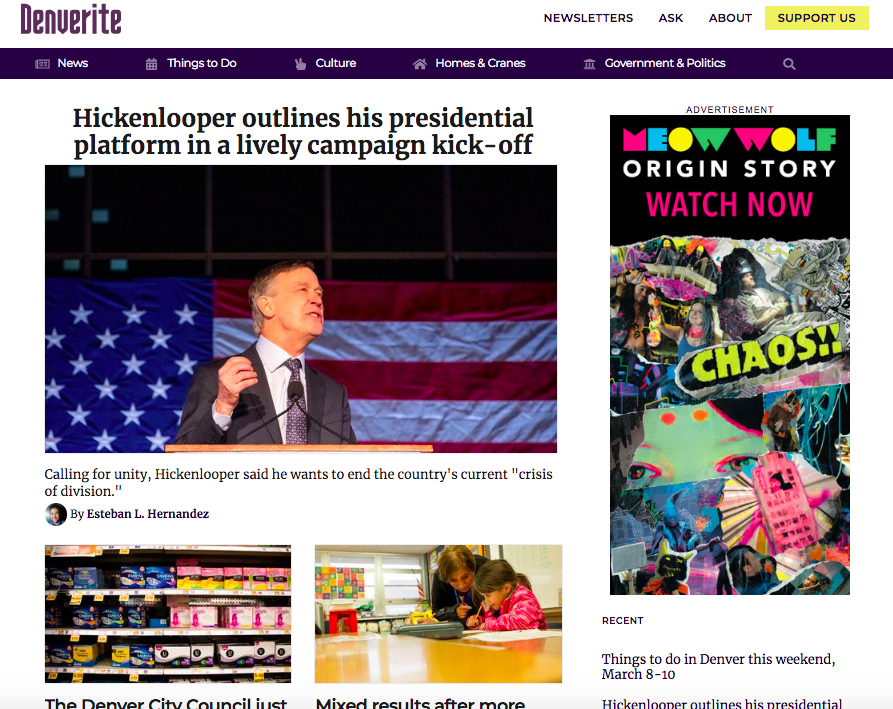 Earlier this year, CPR announced it was adding an investigative reporting team. It has announced adding a reporter to cover Washington, D.C. as well as an expansion of its news staff.  With the Denverite purchase, it will add five more reporters to CPR’s news efforts, putting its news staff in the mid-40’s, said CPR’s Executive Editor Kevin Dale.

“To be able to get five experienced journalists who are already on beats I have on my long-term map, that just accelerates that expansion,” Dale said.

“I absolutely expect to teach them over time how to become radio reporters and do radio features.”

In onboarding a local news startup, CPR is following in the footsteps of WNET, which also said this week it was acquiring NJSpotlight. Last year, WNYC acquired Gothamist, KPCC added LAist and WAMU purchased DCist.

All have continued to publish under their own brands, as will Denverite when the transition takes place on Monday.  However, there will be an important enhancement: Denverite will offer even more coverage of the arts and culture scene in the Metro Denver area thanks to new support from a local foundation.

Dale says arts and culture coverage has taken a huge hit with the retrenchments at Denver news organizations.

The Denverite purchase reflects another trend:  “Increasingly public broadcasters are getting comfortable with fostering diverse brands under the mothership,” observes Chris Krewson, vice president of strategy for Spirited Media. The company is now pivoting to become a consultancy, with Chicago’s WBEZ as an early client.

CPR is getting something else in the deal: Spirited Media’s experience in getting reader revenue and memberships – not via the airwaves but via cell phones.

Spirited Media’s three mobile-focused sites were launched to target millennials. CPR will get a built-in “next-gen audience,” Krewson said. More than half are under age 35, and 75 percent are under 44. “It’s not the tote-bag crowd,” he said.

Moreover, thanks to a company-wide membership campaign last year, Denverite added 1,200 new members, the most of the three sites. Billy Penn, the Philadelphia site, and The Incline in Pittsburgh are also expected to spin off to new owners soon.

In a testament to what Denverite has accomplished since its launch, three local foundations quickly stepped up with $350,000 to support early costs of acquiring the site. After three years, CPR said it will fund Denverite out of its operating budget.

It’s all part of CPR’s long-range plan. “What we’re committed to do at CPR is to become the primary news source of the region,” Dale said.