That job opening was posted June 19 by WMNF, a small community radio station in Tampa, Fla., that unabashedly embraces a progressive and social justice mission and a “commitment to equality, peace and economic justice.” The posting appeared on both WMNF’s website on CPB’s job board. 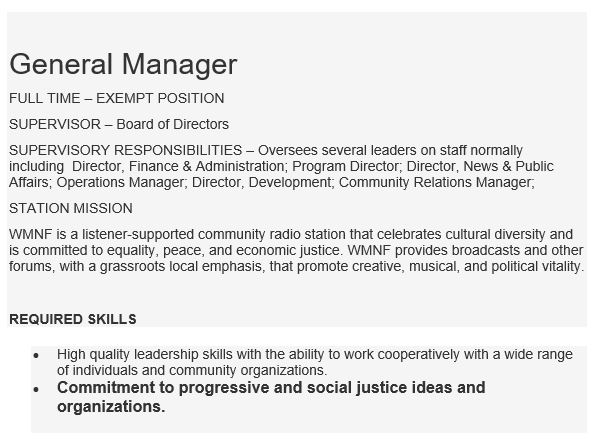 Part of WMNF's ad for a new general manager with one of the required skills highlighted.

WMNF receives federal funding in the form of a Community Service Grant from CPB: Some $140,000 for 2019. It qualifies for this funding, saying it represents an “underserved” audience of progressives in the greater Tampa Bay area, which has about 4.3 million people.

WMNF board president David Harbeitner said in a telephone interview that the station serves its community with about four hours a day of news and public affairs programming.

Eligibility criteria for Community Service Grants focus on such things as financial responsibility, staffing and programming hours, and the amount of non-federal financial assistance a station raises. Diversity is a principle.  Fairness and balance in news reports is not specifically required. Grantees, however, must certify that they comply with the Communications Act, which does call for objectivity and balance.

CPB does encourage its grant recipients to adhere to the Editorial Integrity for Public Media Guidelines released in 2012.  Adoption of those guidelines, however, is voluntary.

WMNF’s former GM, Craig Kopp, noticed the job description shortly after it was posted. He resigned on April 15. There is some history here. He says he tried to respond to some complaints from the community by adding some new programming.  His news director objected.  He fired the news director, who was a co-founder of the station and a popular person in WMNF’s community. The news director filed a grievance with the board. Amid a public fracas, the board later reinstated the news director but not Kopp’s oversight of the position. Shortly afterward, Kopp left, explaining his departure in a letter to the staff.

Kopp said he doesn’t recall whether language requiring a “commitment to progressive and social justice ideas and organizations" was in the job description when WMNF hired him four years ago. But when the job was recently posted, “It stuck out like a sore thumb when I saw it, based on what I know.”

Hiring decisions are out of CPB’s lane. “CPB does not have requirements regarding hiring practices outside the scope of state and federal regulations,” said Kathy Merritt, CPB’s Senior Vice President, Journalism and Radio. “CPB does have requirements regarding programming content, which must be for general audiences, in order to qualify for CPB grants.”

The station’s interim general manager, Cindy Reichard, said the board’s personnel committee reviewed the job description and tweaked some language but not that requirement.

Board president Harbeitner said the language has been in the station’s job descriptions for years. “That is something that has evoked the ethos of the place. We’re kind of mission-driven.”

The station also airs music and other content and, as a non-profit 501(c)3, it steers clear of politics and doesn’t take issues positions in elections, he said.

“The station was founded to represent those who were not being heard,” Harbeitner said. “Progressive organizations are the ones that tend not to be given a voice.” He said he believes that is still true today.

“We try to be – I know it sounds pollyannaish – positive in the messaging that comes out of the station.

Could a conservative apply to be GM? “Absolutely,” Harbeitner said. “We’re not looking to screen out applicants for their personal belief systems.”

But doesn’t a job description requiring an applicant to have a “commitment to progressive ideas and social justice organizations” do just that?

“I hadn’t really thought of it through that lens,” he said. “I see what you’re saying.”

The language was crafted in a “simpler time,” he said, adding that it “perhaps has more baggage than we intended and reflects a position rather than a spectrum.” He said it might be better to determine an applicant’s fit for the station through the interview process.

Harbeitner said he might have the personnel committee revisit the job description, but a week later it was still posted.

In terms of audience, former GM Kopp said WMNF has a cume that ranges from an average of 65,000 to 70,000 per week. That would put its annual federal support at about $2 to $2.15 for each listener who tunes in per week. CPB’s annual funding of $445 million amounts to about $1.35 per American per year.

To me, this doesn’t pass the sniff test. It’s certainly fine for WMNF to target a progressive audience. But I don’t think taxpayer dollars should be used to support it – not in today’s polarized political environment and not to fund a public broadcaster espousing a mission that can fall into one of the current political camps, be it liberal, conservative, socialist or progressive.

It makes for hearty fodder for those who want to cut public support for public broadcasting – even for those public stations who are working hard to be neutral, balanced and fair.