Local Music to Their Ears

So what does Charlotte, N.C., stand for?

If WFAE has its way, Charlotte might soon be known for its music scene. The city’s NPR affiliate on Monday is launching a local-music discovery podcast, “Amplifier,” spotlighting the region’s singers, bands, songwriters and others. The podcast will feature a different local artist every day for all 20 weekdays in September.  Then, more new artists will be spotlighted every month.

For the station, it’s as much a local engagement strategy as a programming initiative. For local artists, it opens a crack in the door to the big time. For WFAE, it’s an onramp to celebrate community assets as it ramps up its local news and information content and a spirited podcasting strategy.

“When I think of these artists, they need exposure. They need support from the public. They want to get the word out. Without that, they are creating work in a vacuum,” said “Amplifier” host Joni Deutsch, who joined the station in November as the on-demand content and audience engagement producer. “I think of WFAE as building that bridge.”

In July, WFAE issued a call-out, inviting artists to apply. Some 300 did, offering everything from punk, to neo R&B, cinematic jazz, to Latinx and Americana. “It was stellar,” she said. A major sponsor has already signed on. Down the road, she envisions the station’s work with local artists to lead to music festivals and music videos.

To be sure, public radio is well-known for its music discovery efforts. In addition to NPR Music’s initiatives, CPB in 2015 funded VuHaus, now a collaborative of some 20 stations, including public music’s standard bearers. It gives the stations the strength to showcase emerging artists in music videos on the VuHaus site instead of on YouTube. And with the recent launch of Slingshot, VuHaus and NPR Music are more intentionally incubating emerging artists, many of them from communities in the collaborative. Slingshot will engage in more storytelling and select several artists to get extra attention from the collaborators.

In the view of Erik Langner, VuHaus president, these efforts are all about “flexing our muscles and getting a little credit for identifying these artists early and giving them a shot.”

But it’s also about fulfilling public broadcasting’s mandate to “serve the whole person and the community” while achieving impact and telling local stories about the arts, he said.

Featuring local artists in regular on-air programming is not uncommon. Many public broadcasters, some all-music and some with mixed formats, do this, including the vaunted WXPN in Philadelphia, The Bridge in Kansas City, Radio Milwaukee and Oregon Public Broadcasting, to name a few. A few on-air local music programs, such as those on WVXU in Cincinnati, Indiana Public Radio and Mississippi State’s KSMU, are available as podcasts as well.

WAMU in Washington, D.C., invites local musicians to supply the interlude music heard in its talk-show and news breaks through its Capital Soundtrack initiative. An effort to spotlight local bands, “Bandwidth,” has been shelved to focus on other activities.

And when music rights are involved, it can be a lot of work. WFAE, for instance, negotiates individually with each of its artists for the rights to air or stream their music. It seeks the right to use a sample of music from each copyright owner across the station’s platforms.

“I think this is an area for experimentation,” said Tom Thomas, co-CEO of the Station Resource Group. “How do we find a voice in an area that is not a straight-ahead journalistic voice?”

“That is a trend I think we will see more of. How will broadcasters best deliver local value?” 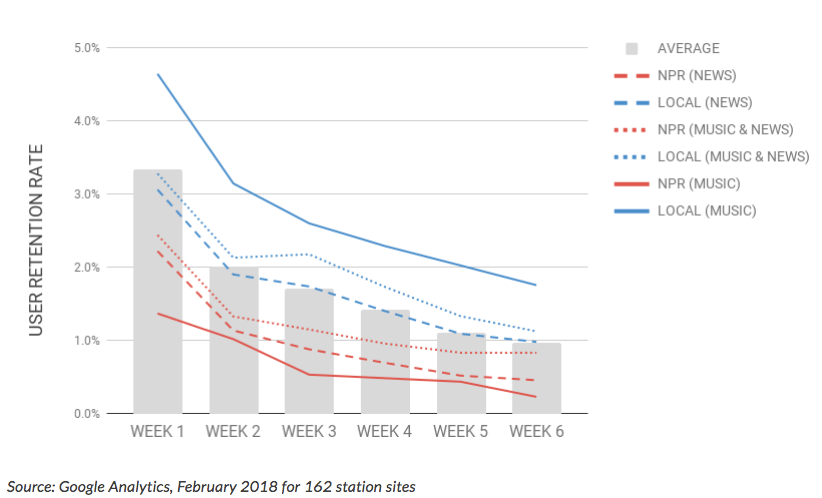 She received a Gracie Award (named after comedian Gracie Allen) in June from the Alliance for Women in Media. She was honored for her podcast interview with “violinista” Alasha Al-Qudwah titled “You Don’t Need Anything But Your Heart to Play This Music.” It was an episode of the second season of “30 Days of #WVmusic,” one of Deutsch’s successful music program ventures at West Virginia Public Broadcasting.

That podcast “really spurred a lot of engagement,” she said. After the series, she asked the artists what they got out of it. “Some got an NPR Music feature. Some got gigs. A local music festival launched. And some of them just felt appreciated.”

There are not many other media outlets that can do what public broadcasters are especially suited to do in this arena. Providing a local cultural discovery experience while amplifying the work of local artists seems to me like a win for the audience, a win for the artists and a win for the station.