With today’s news cycles dominated by the same stories, frequently citing the same experts and repeating the same sound bites, how does a journalism organization break through the noise with fresh content that is particularly targeted to its audience?

In the pre-Internet days, one news outlet dropped old-fashioned postcards at public libraries and community meeting spots, soliciting responses to a few questions. The Sun News in Myrtle Beach, S.C., asked residents to share community concerns by asking: What Makes You Mad?

It would be hard to imagine unlocking the passions behind that question these days. (In Myrtle Beach, it was the ticky-tacky signs populating that beach community’s storefronts. The postcard input helped propel a community conversation.)

Now tech platforms have advanced enough to help generate more bottoms-up instead of top-down local reporting – the kind that mirrors audience confusion, curiosity or just a craving for more information.

Public radio stations are claiming prime spots in the vanguard of this so-called public-powered journalism.

Particularly encouraging is that these efforts are expanding beyond almost whimsical, one-off questions (How do firemen keep cool in those fire outfits?) into beat reporting, longer-form podcasts and enterprise series.

Powering these developments are some of the newer platforms. To be sure, American Public Media’s 15-year-old Public Insight Network has long recruited deep participation by formally recruiting a corps of listeners willing to be go-to stakeholders on multiple topics. But younger platforms such as Hearken and GroundSource offer listeners easier and quicker engagement on-ramps that can be helpful to daily reporters. Hearken is an online platform that invites audiences to submit questions and often vote on which ones a newsroom will answer. Sometimes the questioner is invited to participate in the reporting process. GroundSource connects with audiences through mobile text messages and voice.

“More and more newsrooms are seeing how they can use audience engagement to power existing beats and shape new beats,” said Julia Haslanger, who leads Hearken’s Engagement Consultant team.

Consider Milwaukee Public Radio's “Beats Me” initiative that uses the Hearken platform to help reporters develop stories on the education, race and ethnicity, and newly launched innovation beats.  “It really helps beat reporters know what are the stories my community wants covered,” said Michelle Maternowski, WUWM’s managing editor. The station invites questions and then asks the community to vote on the ones they want reporters to pursue.

“We’ve also been able to find out about things we didn't know were going on,” such as learning about expansion plans for a local landfill, she said.

And while lighter questions often come into the station through its “Bubbler Talk” project, even those can develop into more enterprising efforts, such as its Project Milwaukee: Segregation Matters.

Southern California Public Radio (KPCC), for one, uses all three platforms to hear from its listeners. 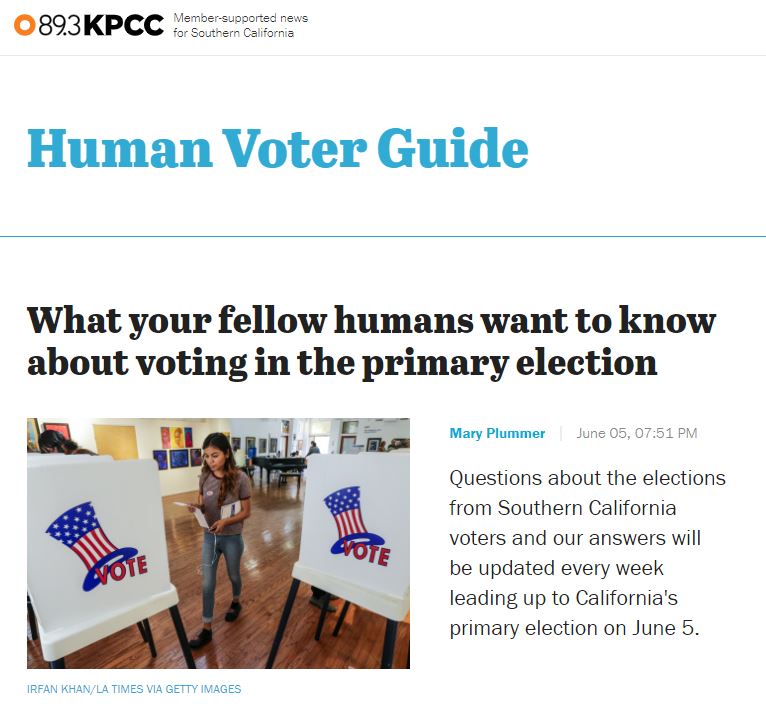 At the start of 2018, the station ramped up its Human Voter Guide in advance of California’s June primary, inviting voter questions via the Hearken platform with mobile prompts and reminders coming via GroundSource.

“We had a fourfold increase in Human Voter Guide participation from the general election in 2016 to the primary in June 2018,” said Ashley Alvarado, SCPR’s director of community engagement.

Its gubernatorial town hall was fueled by 1,107 questions logged from listeners, with several wanting to hear more from the candidates on homelessness and housing affordability, Alvarado said. Moreover, the station’s reach expanded via Hearken to include its partners’ audiences. The Human Voter Guide will ramp up soon for the November midterms.

Earlier this month, KPCC produced a live conversation around homelessness powered by some 70 listener questions; 150 people voted on the questions and 400 RSVP’d to the event, Alvarado said. The winning question surprised her: “What policy steps is the city taking to address housing affordability and homelessness?”

The station expects to produce a report, “The Big One,” on emergency earthquake preparedness with the help of listener questions.

They include such topics as: Is Vermont really losing young people?” And: Why is Vermont so overwhelmingly white?

“I am sometimes surprised by the questions that win,” said Angela Evancie, VPR’s managing editor for podcasts. But she added they often evolve into “deep, interesting stories about Vermont that may challenge our perceptions about the place.”

Many other public broadcasters are using audience engagement tools. What particularly strikes me is how the topics the audience wants journalists to tackle – race, ethnicity, the environment, homelessness – usually require the journalists to delve into the complex fault lines scoring many of our communities.

And seldom do these issues produce the often-braying stenographic noise that so many pundits and cable channels offer up as the news of the day.