Whew, the number of major news collaborations formed to focus on what I’d call master-narrative stories has been eye-popping in the last month.

And the size of the partnerships – several are statewide initiatives – is growing, even as the size of many of the individual news partners is shrinking.

Notable is that public media outlets and nonprofit news startups have been the linchpins of a number of these efforts.

Also of note: As national news coverage has slogged through the polarized fault lines of he said/she said journalism, these collaborations are using data analysis and distributed reporting to unpack stories that percolate beneath the surface of communities and often personally affect news consumers – suicide, unaffordable housing, police misconduct, and the vitality of major cities.

Suicide is the second leading cause of death among Oregon’s 10- to 24-year-olds, and the state ranks 14th nationwide in its suicide rate, according to Brent Walth, writing about the project for Poynter. Stories in the collaboration are running between April 7 and 14. 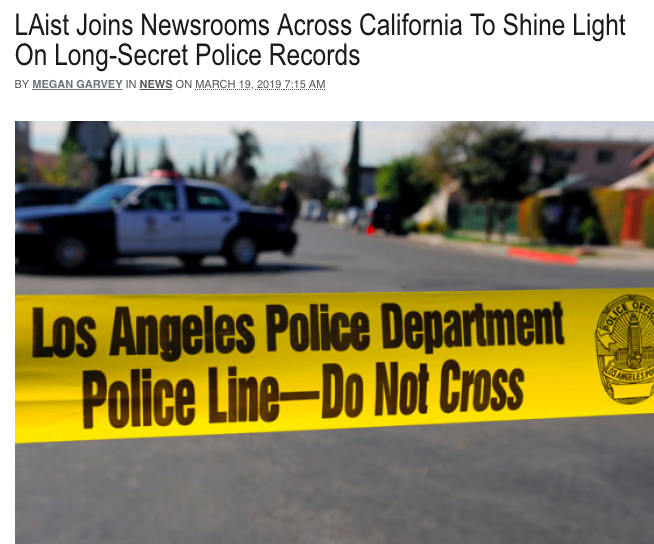 KPCC/LAist is collaborating with newsrooms across California, including public radio stations and newspapers, to access and report on police records that  had been secret until January 1. Photo credit: LAist

Meanwhile, some 33 California news organizations have partnered to access previously secret police records that on January 1 a new state law put into the public domain.  To date, the initiative has made about 1,100 public information requests to 675 agencies across the state’s 58 counties, wrote Megan Garvey, managing editor at KPCC, Southern California Public Radio, on March 19 in LAist.com. Sought are internal records about such things as the use of deadly force, sexual misconduct and dishonesty.

“Our friends up at KQED in San Francisco – the NPR station there – called late last year to ask if we'd be interested in joining them in collaborating on these police records requests,” Garvey wrote. “It started out as just a handful of public radio newsrooms and then we realized: Why stop there?”

In addition to KQED and KPCC and major news organizations such as the LA Times and the Sacramento Bee, it includes public radio stations KAZU in Monterey Bay, KCBX in San Luis Obispo, KCRW in Santa Monica, KVPR in Fresno, and KPRX in Bakersfield.

“We’re unaware of any collaboration spanning so many newsrooms in the state,” Garvey wrote.

It’s no surprise that some police agencies and unions are fighting the release of any records created before Jan. 1.

The California collaboration grew out of the CPB-funded  California Dream partnership among KQED, KPCC, KPBS and Capital Public Radio and CALMatters.

Meanwhile, in Connecticut, some 14 news outlets, including Connecticut Public Radio and the eight daily newspapers in the Hearst Connecticut Media group, recently announced the launch of “The Cities Project.”

Tom Condon, writing in CTMirror.org, says it will focus on the challenges and solutions facing the state’s diminished cities that are surrounded by wealthy suburbs.

Over the next several months, he wrote, “We will look at renewal efforts of the past and present, examining what worked and what didn’t. We will look at factors that inhibit revival – tax inequities, zoning, transportation and others – and look for ways to overcome them. We will travel to cities in other states that are dealing with the same issues Connecticut cities face to compare notes and see if there are ideas that might be useful here.”

North Carolina is now home to two major collaborations. One, led by the award-winning investigative startup Carolina Public Press, recently rolled out the results of its six-month investigation into sexual assault convictions in the state, “Seeking Conviction.” The 11 partnering news organizations, including WUNC North Carolina Public Radio, examined how sexual assault suspects have faced little likelihood of conviction in the state.

Meanwhile, the Charlotte Journalism Collaborative was announced last month with $150 million in funding from the Knight Foundation.  Nine media partners, including WFAE public radio, are working with the Solutions Journalism Network (SJN) to focus, in the first year, on the affordable housing crisis in the city.

Another SJN spinoff, “Broke in Philly,” launched last April, spearheaded by Resolve Philadelphia.  WHYY is one of the 23 partners working together to cover poverty in the poorest big city in the U.S.

And yet another SNJ collaboration, the Granite State News Collaborative, a partnership of 15 news, educations and media outlets, including New Hampshire PBS, launched at the end of December 2018. Through early March, it has unspooled nearly a dozen stories focusing on issues of behavioral health in the state. Startup Manchester Ink Link was an early founder.

The high number of participants in these recent collaborations is a new trend, although the numbers are still less than in such international collaborations as the Panama and the Paradise Papers. Most of these efforts need a coordinator and sometimes a Memorandum of Understanding to quell old rivalries and ensure that data and stories are shared and publication is synchronized.

Pubcasters have been leaders in collaboration for years. CPB supplied millions of dollars in 2016 and 2017 to support connecting and sharing stories, mostly among multiple public radio stations in a state or region.

“Public media have been ahead of the curve when it comes to collaborative journalism in part because of their mission-driven focus, which values the public interest ahead of competitive wins, and because of the support for projects from CPB,” said Stefanie Murray, director of the Center for Cooperative Media at Montclair State University, which is home to the collaborativejournalism.org project.

And like the new nonprofit news sites, public media play a key role, not only in convening stakeholders, but also in amplifying the journalism.

“Collaboratives are most effective when they include a variety of platforms, and public media have been -- for whatever reason -- seen as more palatable collaborators by newspapers, who by and large have been (until recently) slow to see the value of collaborative efforts,” Murray said.