What do you do when your state has some 40 percent fewer journalists than it did 20 years ago – and most of the state’s major news comes from two news startups and statewide public radio?

If you are Vermont Public Radio, you cut out three programs, redeploy staff to beef up local news and add a couple more local newscasts to “All Things Considered.” Then you work on rolling out the rest of a vision for filling the news gaps in a way that your audience wants it done and that uses your dollars efficiently.

But, first, there was a process. It included a survey of members – and non-members – and a listening tour through all 14 of  Vermont’s counties.

“We learned a lot,” said Scott Finn, VPR’s president and CEO. “There were things we heard loud and clear.”

“Long story short, there is this crisis. The most important thing Vermont Public Radio can do is tell more stories from more places in the state,” Finn said.

People also said they wanted more face-to-face time with VPR, which means more events – but events in their local communities, he said.  “We had already committed to doubling the number of events per year” compared with two years ago, Finn said. “Now we’re on track to have more than half of those events outside Burlington,” VPR’s headquarters, he said. 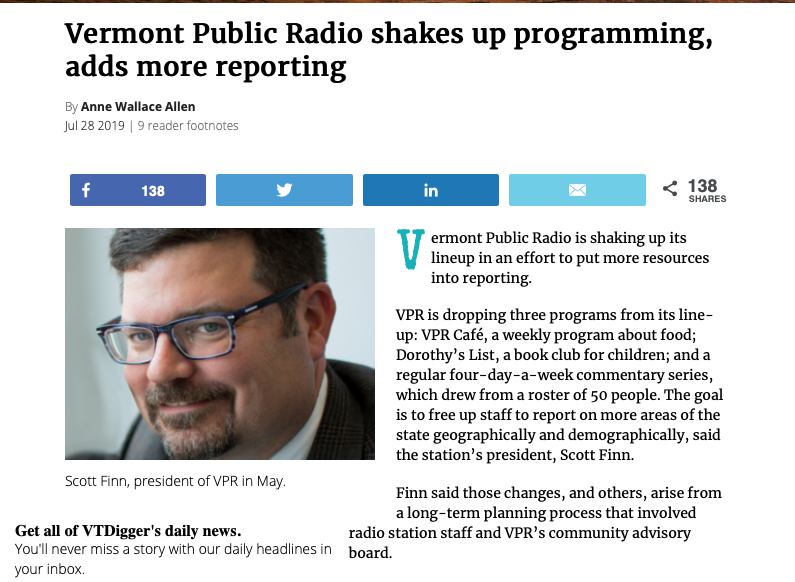 At the end of July, VPR announced that it was ending three programs: “VPR Café,” a weekly food program; “Dorothy’s List,”  a book club for children; and a four-day-a-week commentary series from a roster of Vermont contributors.

Those programs were targeted only after a formal review of the station’s news content – “every single locally produced program,” Finn said.  VPR examined the program’s audience, how much revenue it generated, and what community service need it met.  It asked survey respondents if they personally valued specific programs and, if not, did they see it as filling a community service.

One of the freed-up staffers will now amplify local arts and cultural programming. “We have a lot of people employed in the arts; it’s a huge industry” that ties into Vermont’s quality of life, Finn said. Another will produce stories from a more rural part of the state. Other content from the darkened programs will be wrapped into regular reports.

To be sure, many public radio stations are looking for ways to increase local news. Some – in New York, Philadelphia and Los Angeles – have grafted on existing local newsrooms by acquiring news startups doing deep-dive local reporting.  Others, like WXXI in Rochester, have acquired the local alternative newspaper. Still more in Denver and Boston are boosting their local investigative reporting teams.

In Vermont, for now, a focus will be on future partnerships. VPR plans to work more with Vermont PBS, including on a solutions-based series about the challenges confronting the state’s rural communities that are grappling with demographics, drugs and jobs. VPR also plans to partner with the two robust news startups, the non-profit VTDigger and the for-profit Seven Days on future coverage.

“The crisis is too big for us not to collaborate,” Finn said. Down the road are hopes for more investigative partnerships.

One takeaway from VPR’s listening tour through the state’s counties: “I learned that people don’t care about counties. What they care about is [their] towns.” There are some 250 towns in the state.

So, while the most recent news is what VPR will stop doing, the focus is on what they will do more of: “We will have more reporters and more boots on the ground in more communities in Vermont,” Finn said.

It’s a formula that would work elsewhere.