Earlier this month, WXXI Public Media in Rochester, N.Y. took a unique step for a public broadcaster:  It purchased the community’s alt-weekly newspaper.

The step was unusual for a couple reasons. Many alternative newspapers – including such storied outlets as the Village Voice and Boston Phoenix – have recently gone dark despite their feisty local journalism. They are victims of plummeting advertising.

But also, said Norm Silverstein, WXXI’s president and CEO, “We haven’t heard of anyone else doing print,” in the public media world. (To be sure, pubcasters have acquired digital news outlets, like Gothamist and DCist.) CITY newspaper has been distributed for free since 1971, and it doesn’t really have a full-blown subscriber list.

The appeal of the acquisition strengthened after WXXI delved into the proposal from CITY’s founding couple, who sought to ensure that paper lived on after they retired.

The acquisition not only helps WXXI infuse new content into programming, it also opens the door to new revenue streams down the road. And it nicely positions WXXI as the champion of a cherished community asset.

In part, Silverstein said, “We see plenty of opportunities for shared coverage,” including more in-depth and long-form journalism. 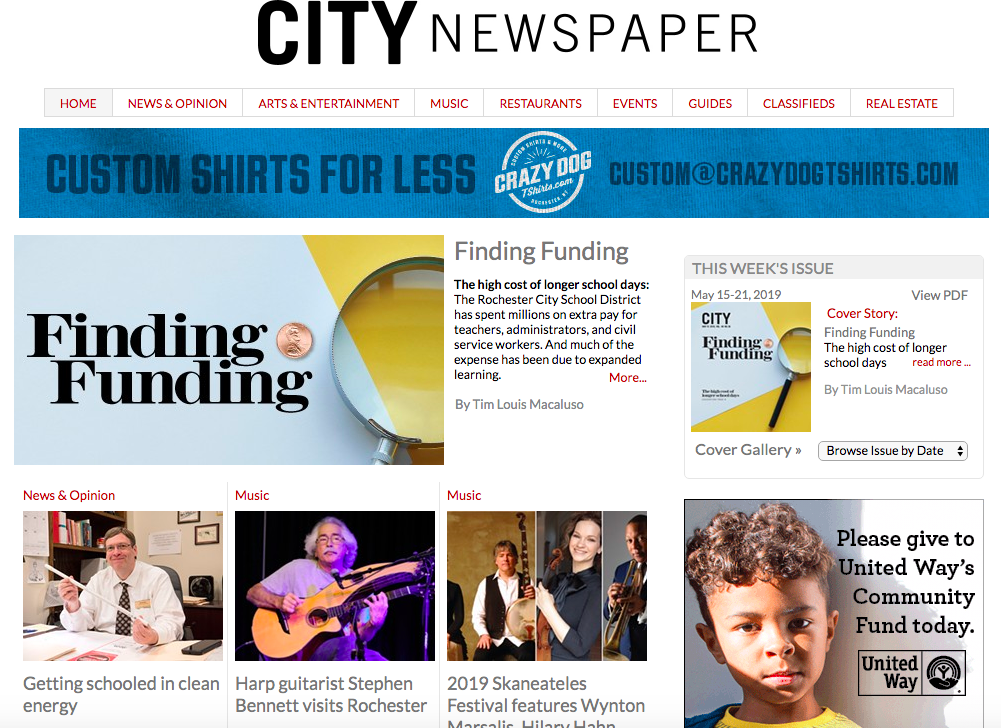 The alt-weekly CITY newspaper is now owned by WXXI

CITY is known for its coverage of arts and culture and the city’s neighborhoods. “It has been the paper you picked up to find out what’s going on in Rochester,” Silverstein said. “Also, they’re edgy.”

Unlike most public media acquisitions, CITY will be a for-profit subsidiary of WXXI under the umbrella of RAMP (Rochester Area Media Partners). Silverstein said WXXI is not only picking up all 14 CITY employees, it plans to continue the spirited publisher’s column, perhaps with community input.

WXXI already had some experience with nontraditional acquisitions. In 2012, it picked up another community asset:  purchasing the city’s 1929-vintage movie house, The Little Theatre.

“It gave us what we like to say was ‘boots on the ground’ in the arts,” Silverstein said.

“They were already not-for-profit, so that made it a little easier,” Silverstein said. Now the facility has new digital projection and sound systems, new screens, seats and a new roof. It has a café, a liquor license and an art gallery. And it’s becoming a music venue for concerts.

WXXI premieres its documentaries and PBS offerings like “Downton Abbey” there.

The CITY newspaper acquisition, at somewhat less than $100,000, was a little different. The newspaper has a revenue stream, it does printing and it has the ability to do inserts, the colorful circulars that deliver ads and coupons tucked inside newspapers. And there are opportunities to attract underwriters and sponsors.  “We have an opportunity to grow that business and make it self-sufficient,” Silverstein said.

Helping with the deal were the New York Council of Nonprofits and the United Way of Greater Rochester Synergy Fund, which assisted with such things as legal and consulting costs.

An overarching motivation, however, was preserving a source of local news, which Silverstein believes is in critical decline.

While WXXI didn’t jump into either deals, Silverstein said it would be a while before WXXI takes on another.

“We’re getting this reputation,” he quips.