TULSA, OKLAHOMA (October 30, 2019)  – “Live From Cain’s,” the public radio music show at the crossroads of the American music and cultural experience, has received a $200,000 development grant from the Corporation for Public Broadcasting (CPB) to support the production of a seven-episode pilot season beginning in 2020.  The development grant, approved by CPB in September and announced at a “Suds and Sounds” event supporting the show at the Marshall Brewing Company Tap Room on October 29, will be used to grow “Live from Cain’s” from the concept stage to a viable music program for eventual national distribution within the public radio system. Funding from CPB and community sources will support show production and research, as well as strategies for digital content and marketing.

“The CPB development grant is a real game-changer for the future of this show,” said Julie Watson, “Live From Cain’s” co-executive producer. “Thanks to CPB and with additional support from the philanthropic and corporate communities, we have a very real opportunity to amplify the music DNA that’s at the heart of the Tulsa cultural experience with public radio audiences in Oklahoma and across the country.” 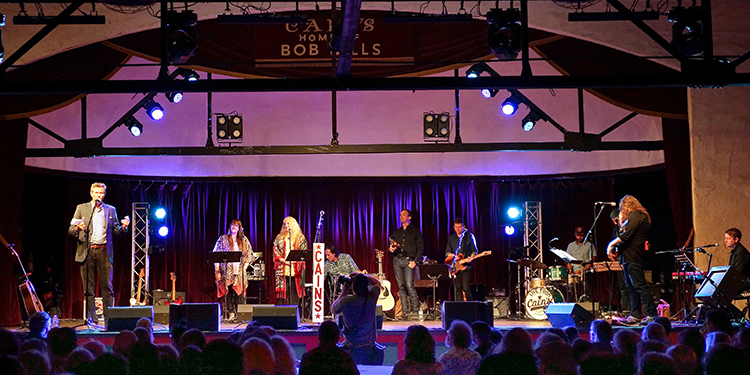 The pilot radio series will follow the successful completion of the first-ever “Live From Cain’s” pilot show, recorded May 29 at historic Cain’s Ballroom and set to air on Sunday, November 17, at 7 pm on KOSU in Stillwater, Oklahoma City, Tulsa and northeast Oklahoma (streaming at KOSU.org); on Saturday, November 30, at 4 pm on KGOU in Norman/Oklahoma City (streaming at KGOU.org); and on Sunday, December 1, at 8 pm on KWGS  in Tulsa (streaming at publicradiotulsa.org). The additional radio shows will also be recorded live at the iconic American music hall that is known by musicians and patrons alike as one of the world’s top performance venues. As the home of Bob Wills and the Texas Playboys from 1934 to 1942, Cain’s Ballroom was especially significant for popularizing Western swing through a midnight radio show and a daily noon-hour broadcast that aired across much of America.

"Public media provides a vital platform for arts, culture and information that documents and shares the American experience in all its richness and diversity. CPB is proud to support the development of ‘Live From Cain’s’ as it continues a tradition of music in Tulsa and the heartland,” said Kathy Merritt, senior vice president, journalism and radio, for the Corporation for Public Broadcasting. “Through this CPB seed funding, the producers of ‘Live From Cain’s’ can pursue the research and pilot development essential for the buildout of programs created with national audiences in mind.”

“We are very excited to host ‘Live From Cain’s’ because of the rich history of radio and music that is at the heart of Cain’s Ballroom, and because of the artistry the new show will share with listening audiences,” said Hunter Rodgers, who runs the family-owned venue with his brother Chad.

“Live From Cain’s” will be hosted by Grammy-nominated singer-songwriter Robbie Fulks, who has appeared on numerous public radio programs and previously hosted a music performance/interview program for XM satellite radio. He will be joined by Tulsa musician Paul Benjaman, who will lead an all-star house band, the Oklahoma Specials, featuring a rotating lineup of homegrown talent from Grammy-nominated musician John Fulbright to pros such as Travis Linville, Paddy Ryan and Jeremy Watkins.

About “Live From Cain’s”
”Live From Cain’s” is an emerging nonprofit supporting the development of a compelling music and conversation radio series for national audiences from historic Cain’s Ballroom. Our series seeks to amplify Tulsa as the crossroads of the American music and cultural experience, immersing audiences in unique entertainment and educational experiences that build community through a shared love of music and their stories. For more information, visit www.livefromcains.com or Facebook.

About CPB
The Corporation for Public Broadcasting, a private, nonprofit corporation created by Congress in 1967, is the steward of the federal government’s investment in public broadcasting. It helps support the operations of more than 1,500 locally owned and operated public television and radio stations nationwide. CPB is also the largest single source of funding for research, technology and program development for public radio, television and related online services. For more information, visit cpb.org, follow us on Twitter @CPBmedia, Facebook and Linkedin and subscribe for other updates.