‘The Pushouts’ Praised for its Positive Portrayal of Latinos 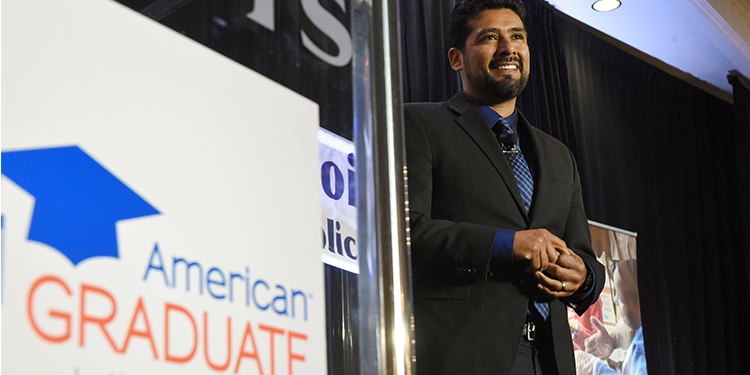 Victor Rios, a former dropout and gang member who credits mentors with helping him get on track to earn a Ph.D., spoke on behalf of the American Graduate initiative at the 2016 APTS Public Media Summit. Photo by Joyce Bogosian.

“The Pushouts,” which tells the story of professor Victor Rios, a former dropout and gang member who works to keep impoverished students of color away from the school-to-prison pipeline, was recently named best documentary at the IMAGEN Awards, which honors positive portrayals of Latinos.

"Victor Rios is a success today. But he was on the brink of failure and a future defined by poverty and incarceration until one caring person, in his case, a teacher, helped him to stay on the path to learning and achievement. Today Victor inspires young people facing similar challenges," said Pat Harrison, president and CEO of the Corporation for Public Broadcasting. "'The Pushouts' is part of the CPB-funded American Graduate public media initiative. American Graduate public media stations work with business and community leaders to identify American Graduate champions, who mentor young people and help them stay on the path to a high school diploma."

The film explores themes of race, poverty and the importance of mentors and features archival footage of Rios as a teen gang member filmed for a 1994 FRONTLINE documentary. That footage is interspersed with stories of the young people Rios mentors at the YO! Watts YouthSource Center in Los Angeles. Rios, who earned his Ph.D. and is a professor at University of California, Santa Barbara, calls youth who don’t finish high school “pushouts” rather than “dropouts” to recognize society’s role in their academic failure.

“We are so pleased about this wonderful recognition of a very powerful story that explores the complex trajectory of Latino and African American youth who are struggling to prepare for life after high school,” said Sandie Viquez Pedlow, Executive Director, Latino Public Broadcasting. “We recognize ‘The Pushouts’ is the kind of film that public media stations can use to build partnerships at the local level and spark a national dialogue on the future of America’s youth.”

The film, which premiered at the Full Frame Documentary Film Festival earlier this year, will be shown at the Urban World Festival in New York September 19-23 and at the American Society of Criminology Conference November 15 before making its television debut on PBS stations in fall 2019.

For more information about the film, go to thepushouts.com.

About American Graduate
Since 2011, the public media initiative American Graduate has grown into one of the largest public media collaborations across the country with over 125 local public media organizations, and national television and radio producers and distributors, working with more than 1,700 community partners. National and local reporting, public forums and town halls, and education resources have helped raise awareness and promote dialogue among leaders, educators, students and concerned citizens, and inspired adults to become American Graduate Champions for the nation’s youth. CPB-supported stations played an important role helping communities address the challenges and highlight local solutions to the dropout crisis, and the national graduation rate is now at an unprecedented 84.1 percent.

In 2018, CPB launched “American Graduate: Getting To Work,” to partner with schools and businesses, and help prepare students with the skill sets and training needed to be part of the new work force, especially for high-demand fields. Join the conversation at facebook/americangraduate, and find out more through your local public media station or cpb.org/americangraduate.