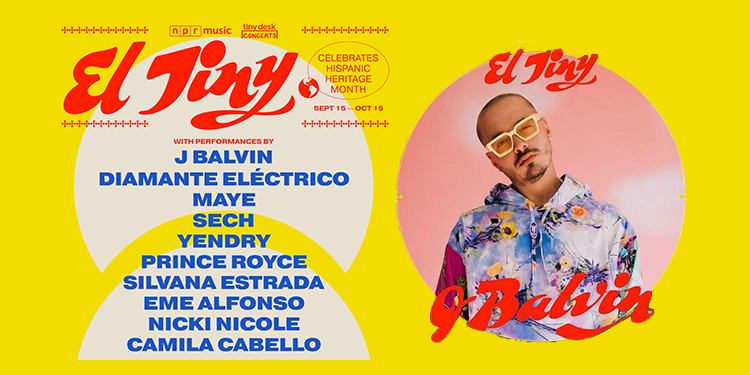 Throughout Hispanic Heritage Month, from September 15 to October 15, public media will broadcast and stream numerous programming highlighting the rich history, arts, culture, and wide-ranging experiences of Latinos in the U.S.

VuHaus, the music discovery service found on NPR Live Sessions, features a Hispanic Heritage Month playlist exploring the rising Latinx voices and sounds that often fall under the radar, such as Chicano Batman, Carla Morrison, and Hurray for the Riff Raff.

Starting with an article exploring why it’s Hispanic Heritage Month and not Latino, Latina or Latinx Heritage Month, NPR programs, NPR Music, and NPR podcasts will include special programs reflecting the diversity of the Latino experience in September and October, with NPR’s "Code Switch" highlighting Latin music and “It’s Been a Minute” host Sam Sanders hosting an episode called “Latin Explosion” on October 12 (check local listings).

Alma’s Way, the much-anticipated animated series created by Sonia Manzano, who broke ground as one of the first Latina characters on TV as Maria on “Sesame Street,” premieres on PBS KIDS on Monday, October 4. Inspired by Manzano’s own childhood, the CPB-supported series from Fred Rogers Productions centers on 6-year-old Alma Rivera, a Puerto Rican girl who lives in the Bronx with her family among a diverse group of close-knit friends and community members.

​Fruits of Labor, a documentary following a Mexican-American teen who works long days in the strawberry fields and the night shift at a food processing factory, airs on POV at 10 p.m. ET on Monday, October 4. (For all PBS programs mentioned, times may vary; check local listings.) The film, produced and directed by Emily Cohen Ibañez, is a co-presentation of POV and VOCES, a documentary series produced by Latino Public Broadcasting with support from the Corporation for Public Broadcasting (CPB).

Rita Moreno: Just a Girl Who Decided to Go for It, showing how Rita Moreno defied her humble upbringing and racism to become one of a select group of Emmy, Grammy, Oscar and Tony Award winners, airs on "American Masters" at 9 p.m. ET on October 5. The documentary is followed by “Lights, Camera, Acción,” a short film with Latino actors, writers, producers, directors, and show runners across generations discussing Latino representation in Hollywood. The short is co-presented by American Masters and VOCES.

The 34th annual Hispanic Heritage Awards, among the highest honors by Latinos for Latinos, features performances and appearances by celebrated Hispanic artists and visionaries and tributes to Carlos Santana, Kali Uchis and more. The program airs at 9 pm ET on October 8. It’s followed directly by sopranos Ailyn Pérez, Nadine Sierra and mezzo-soprano Isabel Leonard performing selections by Mozart, Offenbach and Bizet in Great Performances at the Met: Three Divas at Versailles, premiering at 10 pm.

Letters to Eloisa, the story of Cuban writer José Lezama Lima based on correspondence with his sister in exile, airs at 10 pm October 15 as a VOCES special. Lima was part of the Latin American literary boom that included Gabriel García Márquez, Octavio Paz and Mario Vargas Llosa.

Las Casa de Mama Icha, a documentary about a woman who returns home to Mompox, Colombia, after decades in the United States while sending money home to build her dream house, airs on POV at 10 p.m. ET on Monday, October 18.

Encore broadcasts of numerous VOCES and other documentaries are airing throughout Hispanic Heritage Month, including The Pushouts, Adios Amor – The Search for Maria Moreno, Porvenir, Texas, and  Weekend in Havana. In addition, programs streaming on PBS.org and the PBS Video app include the American Masters film Jovita Idar: Mexican American Activist and Journalist; Latinos Are Essential, a collection of insightful short videos about Latino essential workers from Latino Public Broadcasting; Why Do We Say Latino? on the PBS Digital series Origin of Everything; and PBS Short Film Festival films Joyride and Luciela. Roots of Latin Jazz (Great Performances) and The Latino Experience, a collection of short films highlighting the diversity of the Latino community, are available with PBS Passport.

Five Years North, the story of Luis, an undocumented 16-year-old boy who arrives in New York City from Guatemala with little support and many responsibilities, and Judy, a veteran ICE agent who must weigh the human cost of her work, premieres on "America ReFramed" at 8 pm ET on October 5 and is streaming online and on the PBS app through November 4.

WORLD Channel is also rebroadcasting and streaming numerous other documentaries and programs, including Stories from the Stage: Mi Familia, a Hispanic-themed "Stories from the Stage"; America ReFramed: The Unafraid, a story of DACA students banned from top Georgia universities and denied in-state tuition at other public colleges; and We Like It Like That, the story of Boogaloo music, created and popularized by largely Puerto Rican, Cuban and African American youths living as neighbors and friends in the 1960s.

StoryCorps.org features a Hispanic Heritage Month story collection and information about its Historias Initiative, which has collected Latino stories since 2009.