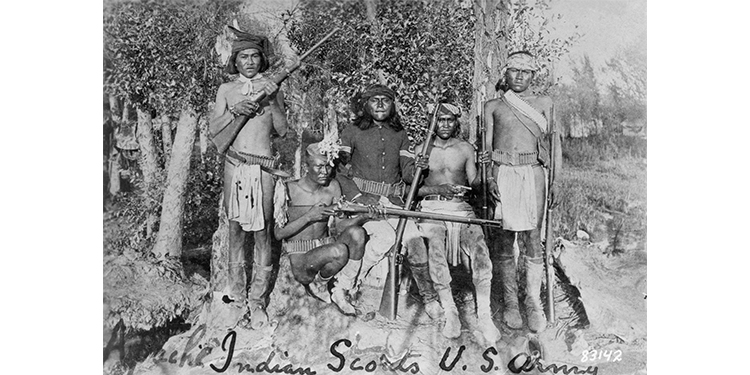 'The Warrior Tradition' explores the history of Native Americans in the military, including scouts at Fort Apache circa 1884. The man seated in the center is 'Cut-Mouth,' the first sergeant of Company A. Photo by Christian Barthelmess, courtesy of  the National Archives

“‘The Warrior Tradition’ is a story like no other. It reminds us that there are extraordinary men and women who are quiet heroes and heroines, who came from many tribes, over a long period of time, committed to serving our country – guided by a code based on tradition, honor, service, courage and dignity,” said CPB President and CEO Pat Harrison, at a panel and preview screening of the film held recently at the National Museum of the American Indian in Washington, D.C. “They are proud of their heritage, and our country is stronger for their service.”

“The Warrior Tradition” explores the ways the culture and traditions of Native Americans have affected their participation in the United States military. The one-hour documentary, co-produced by WNED-TV Buffalo Toronto and Florentine Films/Hott Productions, Inc., airs as a Veterans Day special at 9 pm November 11, on PBS (check local listings). Additional essays, classroom resources and bonus videos created by Native American filmmakers on their military service can be found at pbs.org/warriortradition.

“Return to Rainy Mountain,” a companion piece to “Words From a Bear,” is an account of Momaday’s life and legacy told in the voices of Momaday and his daughter Jill. The Vision Maker Media production is premiering on PBS stations this month (check local listings).

The broadcast premiere of “The Blackfeet Flood,” tracking the lives of two families after the devastating 1964 flood of the Blackfeet Reservation in Montana, will air on WORLD Channel, the public television multicast channel airing in two-thirds of U.S. households. The  documentary, directed and produced by Benjamin Shors and funded by Vision Maker Media, is part of a larger narrative on the enduring impact of the flood, which killed 31 people when two dams collapsed. The broadcast airs on Monday, November 25, at 9 pm ET/8 CT on WORLD Channel’s “Local USA” and streams at worldchannel.org. Online oral histories with flood survivors can be found at sixtyfourflood.com, and at the “Blackfeet 1964” app for Android and iPhone.

“Molly of Denali,” the first nationally distributed children’s series to feature a Native American character, premiered in July and airs regularly on PBS stations (check local listings), the PBS KIDS 24/7 channel and PBS KIDS digital platforms. The program features Molly Mabray, a contemporary Gwich’in/Koyukon/Dena’ina Athabascan girl who uses a variety of resources to solve problems, demonstrating foundational literacy skills needed by today’s young learners. The series is developed and produced by WGBH in partnership with CBC Kids, with support from CPB. It is also funded through the CPB-PBS Ready To Learn Initiative.

Additional Native American Heritage Month programming can be found on local PBS stations, WORLD Channel and Native Voice One. Check local and online listings and streaming apps. In addition, a special collection of Vision Maker Media Documentaries is available for free streaming through the American Archive for Public Broadcasting and the Library of Congress.