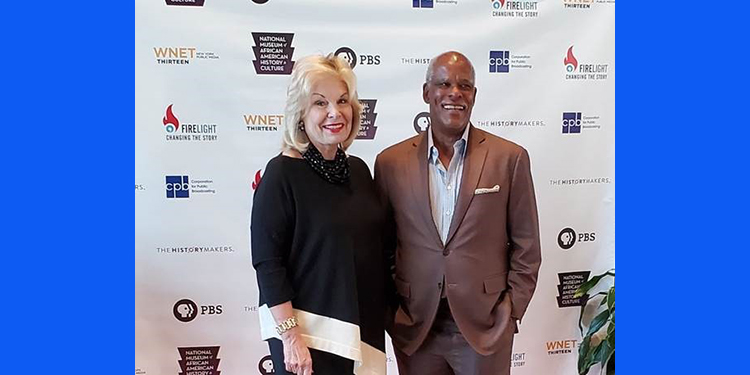 CPB President and CEO Pat Harrison with public media award-winning filmmaker Stanley Nelson at a recnet screening of “Boss: The Black Experience in Business” at the Smithsonian National Museum of African American History and Culture.

Public television stations are honoring the challenges and triumphs of trailblazing African American entrepreneurs and business leaders at local screening events for “Boss: The Black Experience in Business,” the latest film by award-winning public media filmmaker Stanley Nelson. The CPB-funded film premiered on public media stations recently and is now available for streaming online. “Boss” was produced by Thirteen/WNET in association with The HistoryMakers, the nation’s largest African American video oral history archive.

“Stanley’s films and these stories matter. They move us toward an understanding that we are all part of the human experience, and true connection with one another is a vital component of a functioning civil society,” said Pat Harrison, CPB president and CEO, who spoke at an event at the Smithsonian National Museum of African American History and Culture (SMAAHC) in Washington, D.C.

Stories featured in the film include those of publisher John H. Johnson, Motown CEO Berry Gordy, and business pioneer and philanthropist Reginald F. Lewis, among others. The film also features new interviews with contemporary business leaders such as Robert F. Smith, chairman and CEO of Vista Equity Managing Partners, LLC. and Ursula Burns, former CEO of Xerox and chairman of VEON.

Boss: The Black Experience in Business

Nelson’s award-winning public media films have enriched and broadened the range of the African-American experience portrayed in the media for more than 30 years. His films tell remarkable stories that haven’t been heard and add depth, meaning and insight to familiar subjects. His first public television documentary, “Two Dollars and a Dream, the story of Madame C.J. Walker,” also about black entrepreneurship, was funded by CPB.

“African Americans have a long history in business, and they fought through unbelievable odds to be successful,” Nelson said at the NMAAHC screening. “Hopefully that is the lesson: that if you want it, you can get it – whether it’s a mom-and-pop store to a corporation.”

Move To Include initiative expands nationally with CPB support