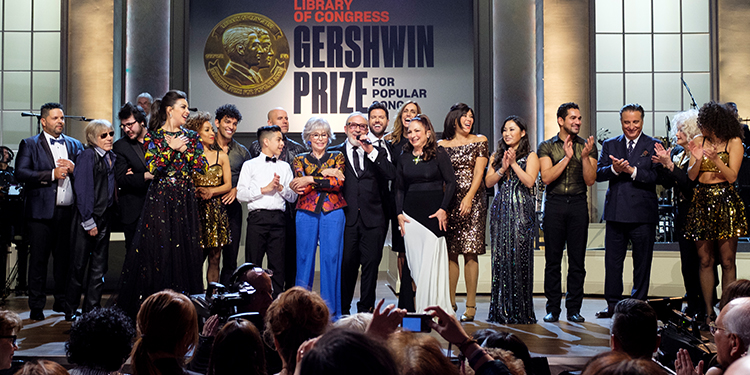 Artists including Jose Feliciano, Patti LaBelle, Cyndi Lauper, Il Volo and the cast of the Broadway musical “On Your Feet” brought the audience to their feet to honor Emilio and Gloria Estefan, recipients of the Gershwin Prize for Popular Song. The celebratory concert, taped recently at Constitution Hall, airs on PBS through CPB support at 9 pm. Friday, May 3 (check local listings).

The concert, hosted by Andy Garcia and Rita Moreno, featured a presentation by Quincy Jones and performances by the Estefans’ daughter Emily, who sang a duet with her mother and performed a medley on the drums. The concert also featured singing and dancing from “On Your Feet,” the musical that tells the Estefans’ story, by the original Broadway cast members.

The Gershwin Prize is given by the Library of Congress to honor a living musical artist’s lifetime achievement in promoting the genre of song as a vehicle of cultural understanding, entertainment and inspiration.

“The Estefans have given us the gift of music, words and songs from the heart,” CPB President and CEO Pat Harrison told the audience before the concert.

This year is the first time the Gershwin Prize for Popular Song was awarded to a married couple, as well as the first time the award was bestowed to artists of Hispanic descent. Previous recipients are Paul Simon, Stevie Wonder, Sir Paul McCartney, songwriting duo Burt Bacharach and the late Hal David, Carole King, Billy Joel, Willie Nelson, Smokey Robinson and Tony Bennett.

The concert is produced by public television station WETA; Bounce, a division of Concord Music Group; and the Library of Congress; in association with Latino Public Broadcasting and major funding from the Corporation for Public Broadcasting.

Move To Include initiative expands nationally with CPB support