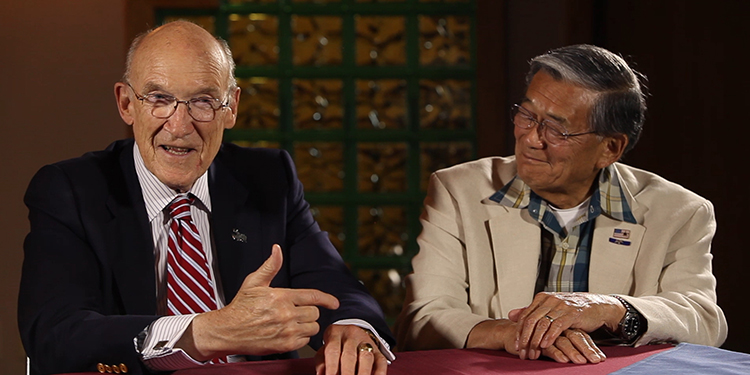 A film biography of Norman Mineta – who was sent to a Wyoming internment camp as a child and became a 10-term congressman and cabinet member to two presidents – premieres on PBS this May, Asian Pacific American Heritage Month.

“Norman Mineta and His Legacy: An American Story” explores Mineta’s lifelong friendship with Alan Simpson, whose Boy Scout Troop in Cody, Wyoming, accepted an invitation in 1943 to have a Scout Jamboree with Mineta’s troop inside the Heart Mountain Relocation Center. The two pitched a tent together, corresponded with each other and both ended up in Congress three decades later, when Mineta was elected to the House in 1974 and Simpson to the Senate in 1978. Simpson, a Republican, provided key support for Democrat Mineta’s signature legislation, the Civil Liberties Act of 1988, which granted reparations to Japanese Americans who had been interned by the United States government during World War II.

“It’s been one wonderful, rich ride of true friendship, and that’s a wonderful thing,” Simpson says in the film.

"Norman Mineta and His Legacy: An American Story," airs on PBS on May 20 (check local listings).

The documentary, airing at 9 pm ET/8 CT May 20 (check local listings), was directed by Dianne Fukami and funded in part by the CPB-supported Center for Asian American Media (CAAM). It is one of many works documenting the range of Asian Pacific American experiences on public media in May.

Other Asian and Asian-American-themed works premiering on public media in May include:

“Out of State,” Independent Lens, 10 pm ET/9 CT, May 6, on PBS (check local listings). Filmmaker Ciara Lacy tells the stories of two native Hawaiians sent to a private prison in the Arizona desert. While there, they discover their indigenous traditions from a fellow inmate serving a life sentence but struggle once they are released and return to Hawaii.

“Pacific Heartbeat,” 8 pm ET/7 CT, Mondays, WORLD Channel, as well as local PBS stations (check local listings) and online. The eighth season premiere of PIC’s flagship anthology series launched April 29 with “Prison Songs,” in which prisoners at Australia’s Berrimah Prison sing their stories in a documentary musical. “Pacific Heartbeat” features three more documentary premieres this season, including “Corridor Four,”  (May 20 on WORLD) about Isaac Ho’opi’i, a first responder at the Pentagon on September 11, 2001, who uses the support of his family and his love of music to put the trauma behind him.

“Next Gen Asian American Art,” on PBS stations in May, check local listings.  Filmmaker S. Steve Arounsack explores how Asian Americans in California’s Central Valley are using art to reshape narratives about and within their communities.

“Pacific Pulse,” a monthly series of short films on the Pacific Islander experience, will release four films on YouTube in May.

To sign up for email alerts for CPB Spotlights, go to https://www.cpb.org/subscribe