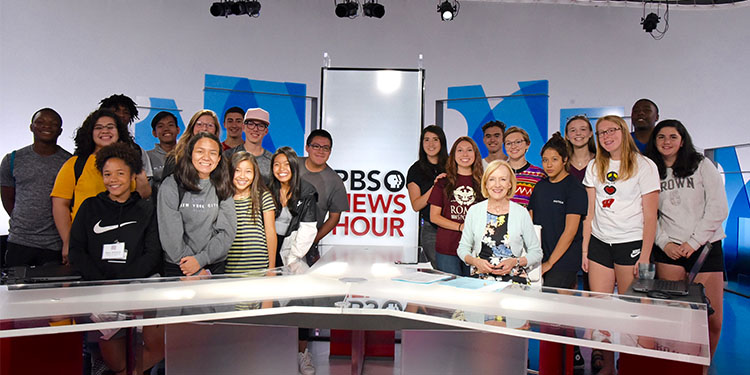 Through the PBS NewsHour Student Reporting Labs (SRL), middle and high school students learn journalism, video production, media literacy and critical thinking. The hands-on curriculum sends students into their communities across the country to report multimedia pieces and connects them to mentors at their local PBS stations.

And the learning went into overdrive recently when 20 SRL students came to Washington, D.C., for the weeklong PBS NewsHour Student Reporting Labs Academy. Between crash courses in interviewing, editing and lighting, they met “NewsHour” staff such as anchor and managing editor Judy Woodruff and executive producer Sara Just, and worked late into the night producing news stories.

“Everything is fast paced, so we got more done in a day than I would in a month. It pushes you to get the story done while wanting to try your best,” said Mary Williams, a rising senior at Hughes STEM High School in Cincinnati. “The most important thing I learned in the Academy is that you should always be prepared and instead of waiting to do things you should do it as soon as possible.”

Mary worked with students from Hawaii, California and Texas and mentors from NewsHour and Georgia to do a story on Rohulamin Quander, a Mount Vernon tour guide who is a descendant of one of George Washington’s slaves. The piece, including Quander’s perspective on history, slavery and the founding fathers, featured student-produced graphics and aired on the "NewsHour" broadcast July 3.

While the goal of the Student Reporting Labs program is to train the next generation of digital journalists, SRL Managing Editor Leah Clapman appreciates the youth perspectives the teenagers bring to the NewsHour every summer. “In many ways they are training us. The students teach us what it is like to be in a classroom, to think about storytelling in new ways. They show us what the future looks like,” she said.

The Student Reporting Labs are funded by CPB as part of American Graduate: Let’s Make It Happen, a public media initiative aimed at improving educational opportunities for all students. SRL also receives support from the National Science Foundation and the Health Science Education Partnership Award.

In the eight years since CPB started funding Student Reporting Labs as a pilot project, it has blossomed into a national program promoting student engagement, media literacy and digital journalism education for thousands of students:

Over the last two years, participants explored topics such as disabilities, migration, gender stereotypes, school safety and letters to the next president. Some of their work has been published on the Student Reporting Labs website and aired on the PBS NewsHour.

“I was shocked that our stories can get published on a major level,” said Darius Jones, a rising junior at Granby High in Norfolk, Va., who worked with classmates on a story of a bodybuilder with Down Syndrome. SRL has given him a different understanding of journalism. “I see journalism as a way to tell stories others are afraid to tell — a voice within a voice.”