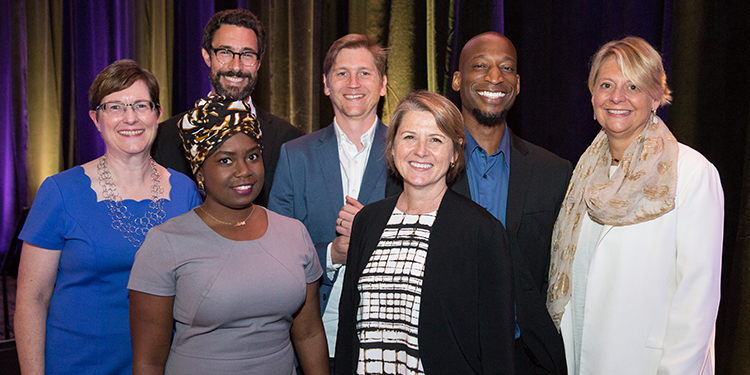 Podcasting is bringing new voices, new audiences and new revenue to public media, and the Corporation for Public Broadcasting brought two award-winning podcasting teams and the chief executives of podcasting powerhouses WNYC and PRX to demonstrate how at the recent Public Media Development and Marketing Conference in Chicago.

At the presentation for over 1,000 public media professionals, Kathy Merritt, CPB senior vice president of journalism and radio, observed that podcasting presents a great opportunity for public media, as an estimated 124 million Americans have listened to podcasts. However, just 1 percent of the half-million podcasts in the Apple iTunes store generate enough audience to attract sponsorship, she said. “The good news: The top three podcast publishers in the U.S. are NPR, WNYC and PRX,” with NPR distributing eight of the top 20.

“At CPB, we work in partnership with you to embrace the many opportunities ahead – to reach deep into our communities for new talent, untold stories and untapped funding,” Merritt said. “And to welcome new people to public media, fuel their excitement and passion, and to use it to inspire us all for the work ahead.”

Laura Walker, president and CEO of New York Public Radio, affirmed the importance of storytelling and in using every available format. At WNYC, Walker said, podcasting has evolved from being another platform for already-aired radio shows, to a medium distinct from radio, to a format that integrates with live shows and may be the basis for television, movies or collaborations with other public media stations. Through experimentation and failure, WNYC has built a portfolio of 30 podcasts with 38.7 million downloads, with podcasts drawing dedicated members and new revenue streams.

With CPB support, WNYC created the Werk It women’s podcasting festival to help increase female voices in podcasting. This year’s festival in Queens will feature a podcast accelerator, offering the opportunity to pitch a podcast and incubate a pilot with WNYC’s seasoned producers and editors.

Kerri Hoffman, CEO of PRX, talked about how the company is responding to the rapidly changing digital media landscape with a culture of innovation through the Matter accelerator, the Radiotopia network, and a remodeled Jiffy Lube in Boston dubbed the Podcast Garage. “Garages are where things get tinkered with and made, and we lean into that,” she said.

Two of the seven teams that took part in PRX's Project Catapult, a CPB-supported podcast training program, offered their stories of success.

Kameel Stanley and Tim Lloyd of St. Louis Public Radio described how the podcast “We Live Here” was initially launched as a journalistic project to explore race and class after Michael Brown was killed by a police officer in nearby Ferguson, Mo. Through Project Catapult, the podcast evolved from a “reporterly” production on “race, class, power poverty, systems and the people they touch,” to a story-focused program with the tagline “a podcast for people somewhere on the woke spectrum.” After participating in Project Catapult, its downloads were up 400 percent in 2017.

Their Project Catapult peers Aaron Henkin and Wendel Patrick of WYPR shared lessons learned from their “Out of the Blocks” podcast, in which each episode is an audio mosaic of an individual city block in Baltimore, featuring interviews, stories and an original score composed by Patrick for each block.

“Out of the Blocks” won a National Edward R. Murrow Award and has resonated so much in Baltimore that Patrick has performed his scores with the Baltimore Symphony Orchestra. WYPR has produced “Out of the Blocks” playing cards, each featuring a conversation-starting question in the spirit of the podcast.

Merritt closed the program by announcing a $200,000 grant to WNYC, continuing support for its Women’s Voices Initiative and the Werk It Women’s podcasting festival, and a $1.5 million grant to PRX for a second round of Project Catapult.

PRX is accepting applications for the second cohort of Project Catapult through September 7 and is holding webinars for public media stations interested in applying. For more information, go to https://catapult.prx.org/.

WNYC Studios is holding Werk It 2018, with a podcast accelerator, November 13-14 in Brooklyn. For more information, go to https://www.werkitfestival.com/