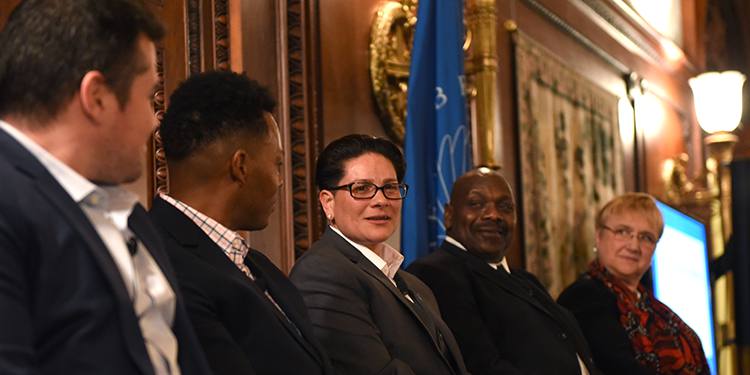 CPB President and CEO Pat Harrison said public media’s critical role in telling the stories of the American people, including the service and sacrifice, discipline and honor of military service people. She said that CPB has invested $15 million in veterans content and community engagement in the past three years and plans to invest $2 million more this year.

Congressman Phil Roe, chairman of the House Veterans Affairs Committee who served as an Army medic in Korea, spoke of fallen friends and the importance of remembering their service and sacrifice. Dr. Roe thanked the assembled crowd, especially for news coverage of the problems at the Veterans Administration medical facilities in Arizona and for telling veterans’ stories, which don’t end on the battlefield. “It’s unconscionable what happened to Vietnam veterans, and I don’t think it will happen again,” he said.

Senator Ed Markey, co-author of the 1990 Children’s Television Act, joined Dr. Roe in saluting the veterans and praised his hometown public media station WGBH as the “World’s Greatest Broadcast House.” Sen. Markey spoke about how public broadcasting educates and helps us understand ourselves and the world.

Karen Lloyd, director of the Veterans History Project at the Library of Congress, noted that public media and the Library have collaborated on projects ranging from the Gershwin Prize for Popular Song to the American Archive of Public Broadcasting. The Library, she explained, is organized into Thomas Jefferson’s categories of Reason (Philosophy), Memory (History) and Imagination (Fine Arts). Its work with veterans combines all three categories and helps us all better understand our history.

Thanking CPB and the Library of Congress for their partnerships on veterans and other initiatives, WGBH President and CEO Jon Abbott noted the station’s in-depth journalism, cutting-edge science and history programming. WGBH, he said, “also introduced cooking on television, beginning with Julia Child, and we are pleased to continue that tradition with the extraordinary Lidia Bastianich.”

As a refugee who escaped communist Yugoslavia as a child and spent two years in a former Nazi concentration camp in Italy, Bastianich has a special interest in honoring the troops who fight for the freedoms she never takes for granted. With support from CPB and WGBH, she hosted the PBS special “Holiday for Heroes” after traveling across the United States, meeting and cooking with veterans, and learning their stories about how they recovered from wounds and overcame other challenges to succeed. She also prepared a meal along with ABC newsman Bob Woodruff for 250 sailors onboard the USS George Washington.

“My entrée to everything is food,” she said. “Food is very important. When you give somebody food, you don’t wish them harm; you wish them well. So a table is a very special place to discuss things.”

Producer John Maggio moderated a discussion with Bastianich and veterans who had been featured in the special, who talked about service and sacrifice, resilience and the role of meals in bringing people together to foster healing and recovery.

Army veteran and Purple Heart recipient Yonas Hagos, the owner of “six and counting” Dunkin’ Donuts franchises, was so severely injured in Iraq that he was not expected to live. He credited his mother who cooked for him and pushed him to take advantage of available resources to recover physically and mentally.

Marlene Rodriguez, also an Army veteran and Purple Heart recipient, struggled to recover from what she described as “wounds you don’t see on the outside.” On a whitewater kayaking trip in Utah, she realized she could overcome anything and is now studying sociology to pursue a career in recreational therapy.

August Dannehl, a native of New York who decided to enlist in the Navy after September 11, attended NYU film school on the GI Bill and is also a chef. He talked about volunteering to serve and the opportunity it provided. He now works with We Are the Mighty to tell veterans’ stories through film.

And Willie Sherrer, an Air Force veteran who fell on hard times after losing two children, described how he got his diabetes, addiction and depression under control with the help of the Veterans Administration. He trained with the Culinary Command and now owns a barbecue business in Methuen, Massachusetts.

Bastianich observed that as she got to know these and other veterans, she noticed a common theme: “The regimentation you get in the service is a springboard for a new life and moving on.” She applauded the veterans and active duty troops for their service, their resilience in the face of injury and for finding success each in their own way.

Harrison thanked all those currently serving in the Armed Forces and the veterans gathered for the Salute and said that along with Lidia’s special, CPB-supported documentaries such as “Coming Back with Wes Moore” and “Military Medicine: Beyond the Battlefield”; Memorial Day and Fourth of July concerts; and the StoryCorps Military Voices oral history project are part of public media’s commitment to “tell their stories, providing content that matters for free and commercial free to all Americans.”

Inclusion and Access at the Core of ‘Becoming Helen Keller’