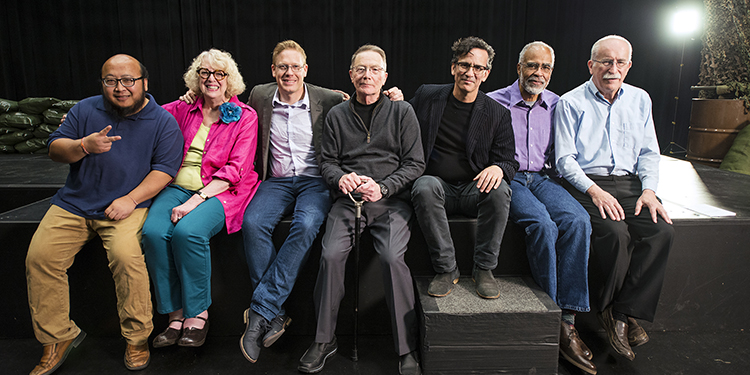 Over 18 immersive hours, directors Ken Burns and Lynn Novick tell the epic story of the Vietnam War as it has never been told on film, with firsthand accounts from nearly 80 witnesses including Americans who fought in the war and others who opposed it, as well as Vietnamese combatants and civilians.

In addition to the film, CPB supported grants to 74 public media stations across the country to partner with local libraries, theaters, veterans service organizations, schools and other local organizations to explore the war’s lasting impact. Through screenings of “The Vietnam War” documentary, panel discussions and other events, these stations and partners are inviting the public to share personal stories and photos of veterans and affected family members, and hosting programs to honor those who served.

The film includes rarely seen, digitally re-mastered archival footage from sources around the globe, photographs taken by some of the most celebrated photojournalists of the 20th century, historic television broadcasts, evocative home movies, and revelatory audio recordings from inside the Kennedy, Johnson and Nixon administrations.

“Ken and I made 'The Vietnam War' so that we could better understand what happened in the war, but also to hopefully open up a conversation about the war that we as a country have kept at a distance for many decades," Lynn Novick said. "Through screening events, local programming, education initiatives, and conferences that have brought veterans and Vietnamese American communities together, stations are helping us fulfill this vision in a powerful way that only public media can do. They are providing a space for these groups to connect and have a dialogue about issues that are often difficult to address, but are worthy of examination.”

On the ground, public media stations are focused on their community’s historical connection to the war. For example, given the large Hmong population in Minnesota, Twin Cities Public Television’s upcoming hour-long documentary, The Secret War, will share the history of the CIA’s Secret War in Laos, as well as the refugee camp and resettlement experience through the personal reflections of local Hmong veterans.

Twin Cities Public Television is also working with The Telling Project, a national arts organization that employs theater to deepen understanding of veterans’ experiences. As they create Telling: Minnesota’s Vietnam, a play in which a small group of Minnesota Vietnam veterans share their stories, TPT will produce an original documentary that follows the process of creating, rehearsing and performing the play, as well as the reactions of participating veterans, their families and audience members.

"We’ve heard from veterans in our community that now is the time to share and now is the time to listen," said Katie Carpenter, Project Lead for Minnesota Remembers Vietnam at TPT.  Minnesotans share their personal memories on TPT’s digital story wall through videos, narratives, snapshots, and interviews of those who fought in Vietnam and those whose lives it changed at home. Other examples of station work include: “From workshops in Northeast Arkansas where families learn to collect oral histories, to museums in Little Rock hosting artifacts and screening events, to a garage in the western regions of our state where quilts for veterans are being created – we are listening and providing a safe place for deeply personal and diverse stories to be told,” said Courtney Pledger, Executive Director of AETN.

Tucson, Ariz. Arizona Public Media is hosting “Record Your Story” sessions and will produce a one-hour documentary about how the Vietnam War and its aftermath shaped Southern Arizona. Scheduled sessions are September 9 in SaddleBrooke, September 11 at University of Arizona, September 12 in Green Valley, September 14 at the Pima Air and Space Museum and more to follow.

University Park, Pa. WPSU is exploring the impact of war on Pennsylvanians through a cross-platform media and engagement project called “A Time To Heal.” Events on the Penn State University campus and throughout the region provide opportunities for conversation, reflection, and healing, culminating with The Traveling Wall installment in Innovation Park at Penn State October 5–8, 2017.

Moline, Ill. For over 20 years, the Vietnam Veterans Memorial Fund’s half-scale replica of the Vietnam Veterans Memorial has traveled to communities throughout the United States to spread the memorial’s healing legacy. WQPT/Quad Cities PBS hosted The Wall That Heals in Moline July 27-30. The exhibit included a Military Kids Day with educational activities, screenings of “The Vietnam War” previews and “On Two Fronts: Latinos and Vietnam,” and a Veterans History Project Day inviting veterans to share their stories.

Kansas City, Mo. KCPT will lead a community-wide “Big Read” of Tim O’Brien’s “The Things They Carried” in partnership with the library systems in the Kansas City area. The campaign will kick off with a screening and discussion with Ken Burns and Lynn Novick on September 8 at The Midland theater.

As part of this broad multimedia and engagement effort, educational resources for the film are also available at PBS LearningMedia. This vast collection of videos, lesson plans and discussion guides help teachers and students explore the social and political dynamics of the Vietnam War, its legacy and lasting toll on veterans. The tools help students examine why, how, and by whom the Vietnam War was fought, how it affected U.S. citizens at home, and how factors shifted over the course of the war.

Visit the interactive website to learn more about “The Vietnam War” national broadcast.