'Willie Velasquez: Your Vote Is Your Voice' Premieres Monday, October 3, on PBS

Part of PBS Election 2016 Programming, New Documentary Examines the Pioneering Activist Who Mobilized the Power of the Latino Vote 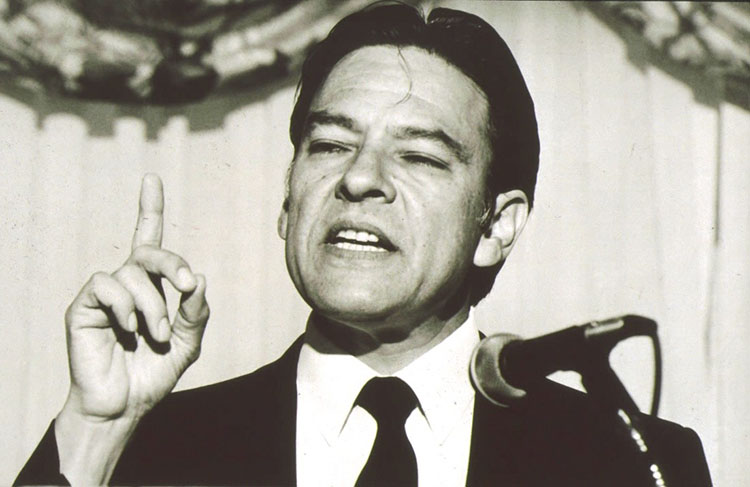 (LOS ANGELES) - Aug. 25, 2016 - With his rallying cry of “su voto es su voz” (“your vote is your voice”), the Mexican-American activist Willie Velasquez launched a grassroots movement that forever changed the nation’s political landscape. Through his nonpartisan Southwest Voter Registration and Education Project (SVREP), Velasquez launched over a thousand voter registration drives in 200 cities, creating a movement that has continued to grow in power each year. “Today there are over 27 million eligible Latino voters,” said Sandie Viquez Pedlow, executive producer and executive director of Latino Public Broadcasting. “By encouraging Latinos to become invested in the democratic process by registering to vote, Willie Velasquez and SVREP paved the way for the continually increasing power of Latinos at the polls.” Directed by Hector Galán (Children of Giant), "Willie Velasquez: Your Vote Is Your Voice," a VOCES/PBS Election 2016 special narrated by Luis Valdez, premieres Monday, October 3, 2016, 10:30-11:30 p.m. ET (check local listings) on PBS.

Throughout American history, Latinos were often kept from the ballot box through the use of poll taxes, gerrymandering and outright intimidation. But drawing inspiration from the Civil Rights movement, Cesar Chavez and the farmworkers movement, and the protests against the war in Vietnam, Willie Velasquez’s Southwest Voter Registration and Education Project would change the face of American politics by harnessing the power of the Latino vote in unprecedented ways.

A Mexican-American butcher’s son from San Antonio, Willie Velasquez’s political awakening came early. A dedicated student, Velasquez attended St. Mary’s University and spent two summers as a Congressional intern in Washington, D.C., working for San Antonio’s pioneering Congressman Henry B. Gonzalez. Returning home, he became one of the founders of the Mexican-American Youth Organization (MAYO), a Chicano youth organization focused on improving educational opportunities. In the early 1970s, Willie marched with the leaders of the Chicano movement and became a key player in the formation of the Raza Unida Conference.

But after years of street protests and marches, Velasquez came to the realization that the only true path to empowerment would be to engage Latinos in the American political process. With the founding of SVREP in 1974, Willie Velasquez’s army of community organizers set out to register one million new voters. The organization also challenged the remnants of Jim Crow and was at the forefront of several court actions against the gerrymandering of political districts and the practice of at-large voting in cities and counties, which often prevented the election of minority candidates. Non-partisan, SVREP advised both parties on how to reach Latino voters, working with candidates from George H.W. Bush to Ted Kennedy.

SVREP’s unprecedented efforts resulted in the registration of millions of Latino voters and the numerous “get out the vote” efforts that still exist today. Latinos now make up 17 percent of the U.S. population, and Latino voter turnout is projected to be between 13 to 16 million this year.

"PBS is delighted to be presenting this film" said Marie Nelson, vice president, News and Public Affairs, PBS. "Willie Velasquez changed the face of American politics and his story is an important addition to our in-depth coverage of this election season."

“Willie Velasquez was a Mexican American civil rights pioneer who changed the local and national political landscape forever” said Joseph Tovares, chief content officer of the Corporation for Public Broadcasting. "His is a great American story that CPB is proud to support."

In 1988, at the peak of his career, Willie Velasquez died suddenly of advanced kidney cancer. He was only 44 years old. In 1995, he was awarded the Presidential Medal of Freedom, the nation’s highest civilian honor. “His name was William C. Velasquez, but everyone knew him as Willie,” said President Bill Clinton at the time. “Willie was and is now a name synonymous with democracy in America. From the farm fields of California, where he organized workers with Cesar Chavez, to the halls of Harvard, where he taught politics, Willie Velasquez was driven by an unwavering belief that every American should have a role in our democracy and a share in the opportunities of our great nation.”

“Willie Velasquez’s work brought millions of Latinos into the political process, both as voters and as candidates,” said filmmaker Hector Galán. “As we go through this current election cycle, it’s important to look back at how far the Latino electorate has come and how our vote continues to truly be our voice.”

About the participants, in alphabetical order:

•Felicita Arriaga was a SVREP activist in Rosenberg, Texas.

•Annette Avina is former director of finance and development of SVREP.

•César Blanco is a State Representative for Texas House District 76 in El Paso, Texas, and interim director of the Latino Victory Project.

•Julian Castro is Secretary of Housing and Urban Development and former mayor of San Antonio.

•Rosie Castro was a San Antonio voting rights activist; she is the mother of HUD Secretary Julián Castro and U.S. Congressman Joaquín Castro.

•Henry Cisneros is a former mayor of San Antonio and former HUD Secretary.

•Diamantina Davila was a SVREP activist in Rosenberg, Texas.

•Daniel Garza is Executive Director of The LIBRE Initiative.

•Antonio Gonzalez is current president of the Southwest Voter Registration Education Project (SVREP). SVREP, founded in 1974, is the largest and oldest non-partisan Latino voter participation organization in the U.S.

•Jose Angel Gutierrez is an attorney and professor at the University of Texas at Arlington. He was a founding member of the Mexican American Youth Organization (MAYO) in 1967 and a founding member and past president of the Raza Unida Party.

•Andy Hernandez succeeded Willie Velasquez as president of SVREP after his death.

•Frances Luna was a SVREP activist in Rosenberg, Texas.

•Choco Meza was National Research Director for SVREP and has continued to be involved in public service.

•David Montejano is a Professor of Ethnic Studies at UC Berkeley.

•Rolando Rios is a San Antonio lawyer whose practice specializes in voting rights.

•Lionel Sosa founded one of the largest Hispanic advertising agencies in the U.S. and was a pioneer in creating political advertising aimed at Latino voters.

•Victoria DeFrancesco Soto is a political scientist providing analysis on U.S. politics and its implications for countries abroad. Soto is a professor at the University of Texas, a contributor to MSNBC and NBCNews.com, and a regular political analyst for Telemundo.

•Armando Villareal is a former field director of SVREP.

Hector Galán (Producer/Director) has been producing critically-acclaimed and award-winning programs for PBS for over 25 years. His productions include the recent Children of Giant, eleven episodes for FRONTLINE, two programs for AMERICAN EXPERIENCE, and the landmark four-part series, Chicano! History of the Mexican-American Civil Rights Movement, which Galán was invited to screen at the White House for President Bill Clinton. His work has garnered numerous awards and recognitions including three Imagen Awards, the Cine Golden Eagle Award, the Telly Award, SXSW Best Documentary, the Golden Apple, and the Blue Ribbon Award and numerous festival awards.

Latino Public Broadcasting (LPB) is the leader in the development, production, acquisition and distribution of non-commercial educational and cultural media that is representative of Latino people, or addresses issues of particular interest to Latino Americans. These programs are produced for dissemination to public broadcasting stations and other public telecommunication entities. Latino Public Broadcasting provides a voice to the diverse Latino community throughout the United States and is funded by the Corporation for Public Broadcasting.

Latino Public Broadcasting produces the series VOCES, PBS’ signature Latino arts and culture documentary showcase and the only ongoing national television series devoted to exploring and celebrating the rich diversity of the Latino cultural experience. Between 2009 and 2016, LPB programs have won over 85 awards, including the prestigious George Foster Peabody Award as well as two Emmys, two Imagen Awards and the Sundance Grand Jury Prize. In addition, LPB has been the recipient of the Norman Lear Legacy Award and the NCLR Alma Award for Special Achievement.

The Corporation for Public Broadcasting (CPB), a private, nonprofit corporation created by Congress in 1967, is the steward of the federal government’s investment in public broadcasting. It helps support the operations of nearly 1,500 locally owned and operated public television and radio stations nationwide. CPB is also the largest single source of funding for research, technology and program development for public radio, television and related online services. For more information, visitwww.cpb.org and follow us on Twitter @CPBmedia, Facebook and LinkedIn.

PBS Election 2016 is a multi-platform initiative that brings together PBS news, public affairs, documentary and digital programming to create the country’s most complete coverage of the 2016 election cycle. Acclaimed series PBS NEWSHOUR, PBS NEWSHOUR WEEKEND, FRONTLINE, WASHINGTON WEEK, CHARLIE ROSE, TAVIS SMILEY and AMERICA BY THE NUMBERS, in addition to partnerships with NPR and American Public Media’s “Marketplace,” will cover breaking election news, provide context to current and historical political issues, explore behind-the-scenes stories of candidates and the election process, as well as a broader look at the foundations of American government.