70 Percent in the First Payment

In accordance with the CPB Board’s resolution of September 2012 and reaffirmed at the April 2016 Board meeting, CPB will once again provide each grantee with 70 percent of its annual CSG in its first payment.

Important Note: As stated on each grantee’s FY 2017 CSG Agreement and Certification of Eligibility form, the grant offer is contingent upon CPB's receipt of its authorized appropriation for FY 2017 and is subject to decreases.

The Incentive Rate of Return (IRR), applicable to CSG Levels C and D, is 0.0565930006. Fluctuation in IRR from year to year is a function of total radio system non-Federal financial support (NFFS) and the CPB appropriation. Please note there is a two-year lag between station financial data used for CSGs and the CPB fiscal year.

*All radio CSG recipients are required to spend 26.07 percent of the FY 2017 CSG on national program production and acquisition costs and be used exclusively for the acquisition, production, promotion and/or distribution of national programming of high quality, diversity, creativity, excellence and innovation, with strict adherence to objectivity and balance in all programs or series of programs of a controversial nature.

FY 2017 Base Grant Amounts (based on current budget level): 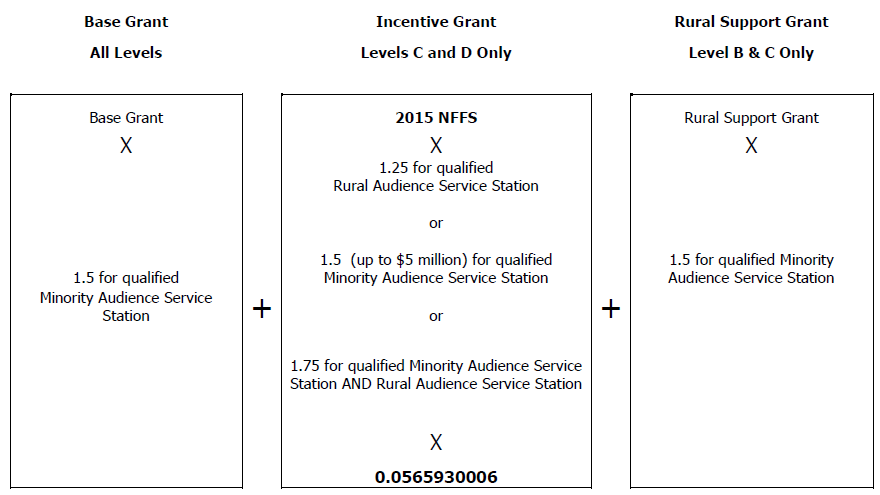 A station is designated as a Minority Audience Service Station if it meets at least one of the criteria below.

A station is designated as a Rural Audience Service Station if it has a coverage area population density equal to or less than 40 people per square kilometer.

All questions about this information should be directed to the Office of Grants Administration at csg@cpb.org. Remember to always identify your station call letters and/or grantee ID number so that we can respond quickly to your inquiry.