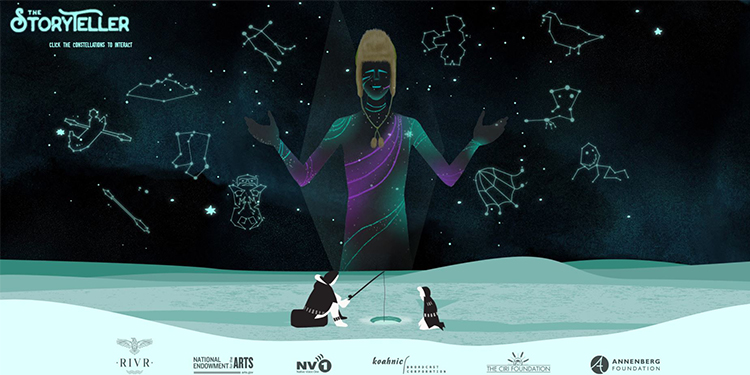 Native American stories and folk tales are getting a multimedia update for a new generation through “The Storyteller,” a 10-part radio and digital series from the CPB-supported Koahnic Broadcast Corp and Rising Indigenous Voices Radio (The RIVR), its youth-focused streaming service.

“The Storyteller” features 10 five-minute stories and folktales by Native American storytellers, including six from the audio archives of KNBA in Anchorage, Alaska. In addition, a shadow animation of “The Denali Athabascan Story” was produced for The Storyteller website, and the audio series is airing on RIVR and public radio stations through Native Voice One (NV1), the Native American Radio Network.

“If we don’t keep these stories going and being passed down, then our tradition just kind of goes away with that,” lead producer John Sallee told Alaska Public Media. The project aims to bring them back in a fun and attentive way, he added.

These programs join ongoing public media content that explores Native American stories, including “Indian Country Today,” a weekday newscast launched in April by the nonprofit digital news organization of the same name. The program started in March as a livestreamed discussion about the impact of the coronavirus on Indian Country. It evolved into a half-hour newscast covering a wide range of topics, from politics to lifestyle and culture. “Indian Country Today,” partially funded by Vision Maker Media, airs on Arizona PBS and other public television stations, as well as the multicast channel FNX/First Nations Experience. It also streams on demand on the Indian Country Today website.

“Molly of Denali,” the only nationally distributed children’s series with a Native American lead, is in its second season on PBS (check local listings), the PBS KIDS 24/7 channel and PBS KIDS digital platforms. The “Molly of Denali” podcast also kicked off its second season this year. The program features Molly Mabray, a contemporary Gwich’in/Koyukon/Dena’ina Athabascan girl who uses a variety of resources to solve problems. The TV series is developed and produced by GBH in partnership with CBC Kids, with support from CPB. It is also funded through the CPB-PBS Ready To Learn Initiative.

Public Media and the Youth Media Landscape: A Q&A