Taking that ‘One Small Step’: A Q&A with StoryCorps’ Dave Isay 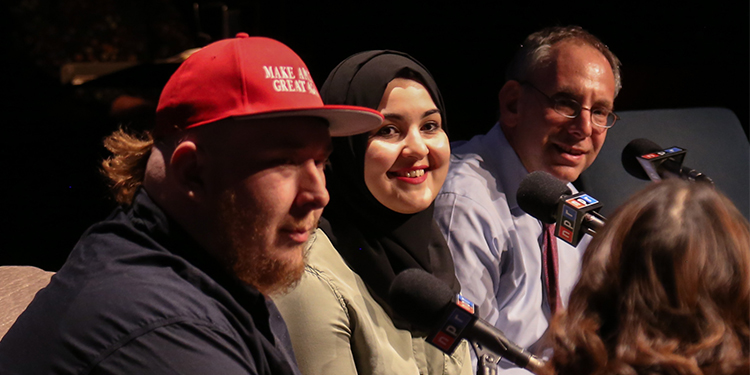 Public radio stations across the country are broadcasting 'One Small Step: Courageous Conversations Across a Growing Divide,' an NPR/StoryCorps special showcasing conversations between people with opposing viewpoints.

The special is part of One Small Step, a StoryCorps initiative encouraging civility and understanding, launched in 2018 by StoryCorps with support from the Corporation for Public Broadcasting. StoryCorps, a non-profit organization dedicated to preserving and sharing stories, is known for facilitating and recording conversations between loved ones. With One Small Step, StoryCorps paired strangers with different political views to record an interview with each other and held a live event in February with NPR, hosted by public radio station WBHM in Birmingham, Alabama. The hourlong special airing this fall and streaming on demand at NPR.org includes excerpts from both One Small Step interviews and the event, with added context from 2020.

CPB caught up with StoryCorps founder Dave Isay to talk about the One Small Step initiative and special.

Q: Why did StoryCorps launch One Small Step? What do you hope to accomplish through it?

A: The growing culture of contempt and dehumanization in America poses an existential threat to our democracy. Over the past three years, with the help of scientists and psychologists across the country (and with the support of CPB!), StoryCorps has developed and tested a powerful intervention that can turn “thems” into “us-es.” One Small Step brings strangers across political divides together for conversations—not to talk about politics, but to get to know each other as human beings. We hope One Small Step at scale can help the country to see the humanity in those with whom we disagree. One Small Step speaks to the values of public media—innovation, excellence, and, above all else, public service to the American people. It’s a moonshot initiative, but we’re giving it everything we’ve got.

Q: The live event was held in February in Birmingham, Alabama, shortly before the COVID-19 pandemic shutdowns, but the NPR special did not start airing on public radio until the fall. Despite the delay, do you feel those discussions are still relevant for today?

A: It’s shocking how relevant the special feels, given that roughly 10 months have passed. The team at NPR knocked it out of the park, and I’m so grateful to them. All of what’s happened since the event in Birmingham—the global pandemic, nationwide protests against racial injustice, the bitterly contentious presidential election—make the mission and message of One Small Step more urgent and needed than ever. These One Small Step participants model for the rest of the country that we need to have the courage to listen. We hope it will inspire people to participate and take small steps toward others.

Q: Since the pandemic, One Small Step interviews have moved to StoryCorps Connect, the StoryCorps virtual platform. Has the move changed the content? How?

A: Up until this year, people who participated in StoryCorps did so face to face. Thanks to CPB’s generous support, when COVID-19 hit we were able to rapidly innovate and adapt our interview model to be virtual for the very first time. We’re still learning how this works for One Small Step conversations and are working with researchers to better understand the virtual experience. But we think this is a game changer for StoryCorps and One Small Step since we’re now able to remove geographic barriers to participation and take One Small Step to scale.

A: For 15 years StoryCorps’ interview methodology never changed—it was a sacred thing we didn’t mess with. But given the increasingly polarized climate in America, we decided we had to do something radical, and started bringing strangers together for the first time. Over the past three years, we’ve recorded hundreds of test One Small Step interviews in 40 cities. The point isn’t to debate politics or change peoples’ minds—it’s to look someone in the eye and recognize that it’s hard to hate up close.

Q: What are Next Steps for One Small Step?

A: StoryCorps is scaling One Small Step nationwide beginning this month. In 2020, One Small Step will be anchored in four cities that our research indicates have a good probability of adopting the ethos and techniques of One Small Step. They are Wichita, Kansas, and Birmingham, Alabama, with two more to be announced in the coming weeks. In each city, we’re collaborating with a broad spectrum of media, political, religious, and community organizations to recruit participants, who we will pair with fellow residents for meaningful, intimate, and courageous conversations about their lives. In partnership with CPB, we’re working with community public radio stations in 2020 to help facilitate and broadcast One Small Step conversations. When amplified by powerful StoryCorps content, we hope One Small Step will whisper truths in people’s ears about who we are as Americans and begin to shift social norms. Like a light seeping into a pitch-dark room, One Small Step will help our eyes adjust so we can begin to see one another again.

To learn more and join StoryCorps in this journey of hope, visit https://storycorps.org/discover/onesmallstep/.