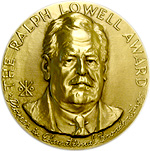 The Corporation for Public Broadcasting recognizes outstanding contributions and achievements to public television by presenting the Ralph Lowell medal.

Ralph Lowell was a Boston philanthropist and banker and founder of the WGBH Educational Foundation, licensee of WGBH-TV, serving as its first president from 1951 until he became chairman in the mid-1970s. He was instrumental in the formation of the Carnegie Commission on Educational Television, which led to the Public Broadcasting Act of 1967 and the establishment of CPB. Lowell was chairman of the board of directors of the National Educational Television and Radio Center during its formative years.

*Award presented in the following year