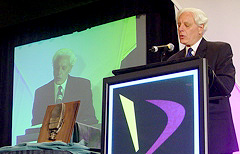 Each year, CPB presents its Edward R. Murrow Award for Outstanding Contributions to Public Radio to individuals who foster public radio's quality and service and shape its direction. This award is the public radio industry's most prestigious honor. It is named for the legendary reporter, producer, executive and government official who championed responsible, courageous and imaginative uses of the electronic media during his distinguished 30-year career. Kevin Klose, president and chief executive officer of National Public Radio (NPR), received the 2006 Murrow Award in New Orleans last month.

Kevin Klose has led NPR since December of 1998. He has been a vital figure in shaping today's dynamic and successful public radio system, and has presided over a dramatic expansion in NPR listenership. A former editor, and national and foreign correspondent with The Washington Post, as well as an award-winning author and international broadcasting executive, Klose previously served as director of U.S. international broadcasting, and as President of Radio Free Europe/Radio Liberty.

In presenting the award, CPB's Board Chair Cheryl Halpern praised Klose as a "leader, a teacher and a visionary" and credited him with "recognizing the need to respond to listener preferences in a constantly changing and technologically evolving information marketplace."

Kevin Klose began his acceptance speech by praising NPR's member stations "for your diligent, focused determination to serve your communities with the authentic voices and perspectives of the American community." He honored the independent producers, distributors, consultants and other specialists, without whom NPR's success and rise in listenership would not have been possible.

He then praised Murrow's pioneering evening news report in the years leading up to World War II -- "Americans had never heard anything like it before" -- and noted that "Murrow's calm, detailed reporting established for American broadcasters the standard by which we are even today justifiably measured". He focused on Murrow's description of the Nazi death camps:

"Murrow flew on 25 bombing raids over occupied Europe, and scored many news coups -- perhaps most hauntingly, his December 13, 1942 broadcast reporting to millions of listeners the Nazi campaign of extermination against the Jews of Europe. Few Americans had heard of this systematic campaign; Murrow's report brought this grim news to millions across the country for the first time. 'It seems that the Germans hope to escape retribution by the sheer magnitude of their crimes,' he reported. 'They are exterminating the Jews and the potential leaders of the subject people with ruthless efficiency...'

Murrow never turned away from this story. In a broadcast as the war was winding down, on April 15, 1945, Murrow reported in harrowing detail his arrival with the U.S. Third Army at Buchenwald. 'It is on a small hill about four miles outside Weimar and it was one of the largest concentration camps in Germany,' he reported. 'And it was built to last.' He then took listeners on a careful, detailed tour of the place where so many innocent people had been put to death. As he finished, he said, 'I pray you to believe what I have said about Buchenwald. I have reported what I saw and heard, but only part of it. For most of it, I have no words.' Later, he told others at CBS that he felt he had failed in this story because he had not conveyed all the terrible details."

"To those who say people wouldn't look; they wouldn't be interested; they're too complacent, indifferent and insulated, I can only reply: There is, in one reporter's opinion, considerable evidence against that contention. But even if they are right, what have they got to lose? Because if they are right, and this instrument is good for nothing but to entertain, amuse and insulate, then the tube is flickering now and we will soon see that the whole struggle is lost…This instrument can teach, it can illuminate; yes, and it can even inspire. But it can do so only to the extent that humans are determined to use it to those ends. Otherwise, it is merely wires and lights in a box. There is a great and perhaps decisive battle to be fought against ignorance, intolerance and indifference. This weapon could be useful."

Mr. Klose urged his colleagues to carry on Murrow's mission by "keeping the light of non-polemic, non-partisan, contextual broadcast journalism shining brightly coast-to-coast, border to border". He urged public broadcasters to band together to produce a continually higher quality product to serve the American people's needs:

"Is there more we can and should be thinking about -- ideas of cooperation and collaboration -- that we can explore together and reach for together, to provide greater growth and sustainability of public radio as we face the daunting challenges of the digital age? How can we best use this irreversible new age of technology to tie ourselves closer together and our mission closer to individual listeners, viewers, visitors online and offline, wired and wireless?"

In closing, he invited NPR's member stations to share the honor of the Murrow Award, saying "you are full partners in the recognition embodied in this award" and urged them to join him on Murrow's "high road".