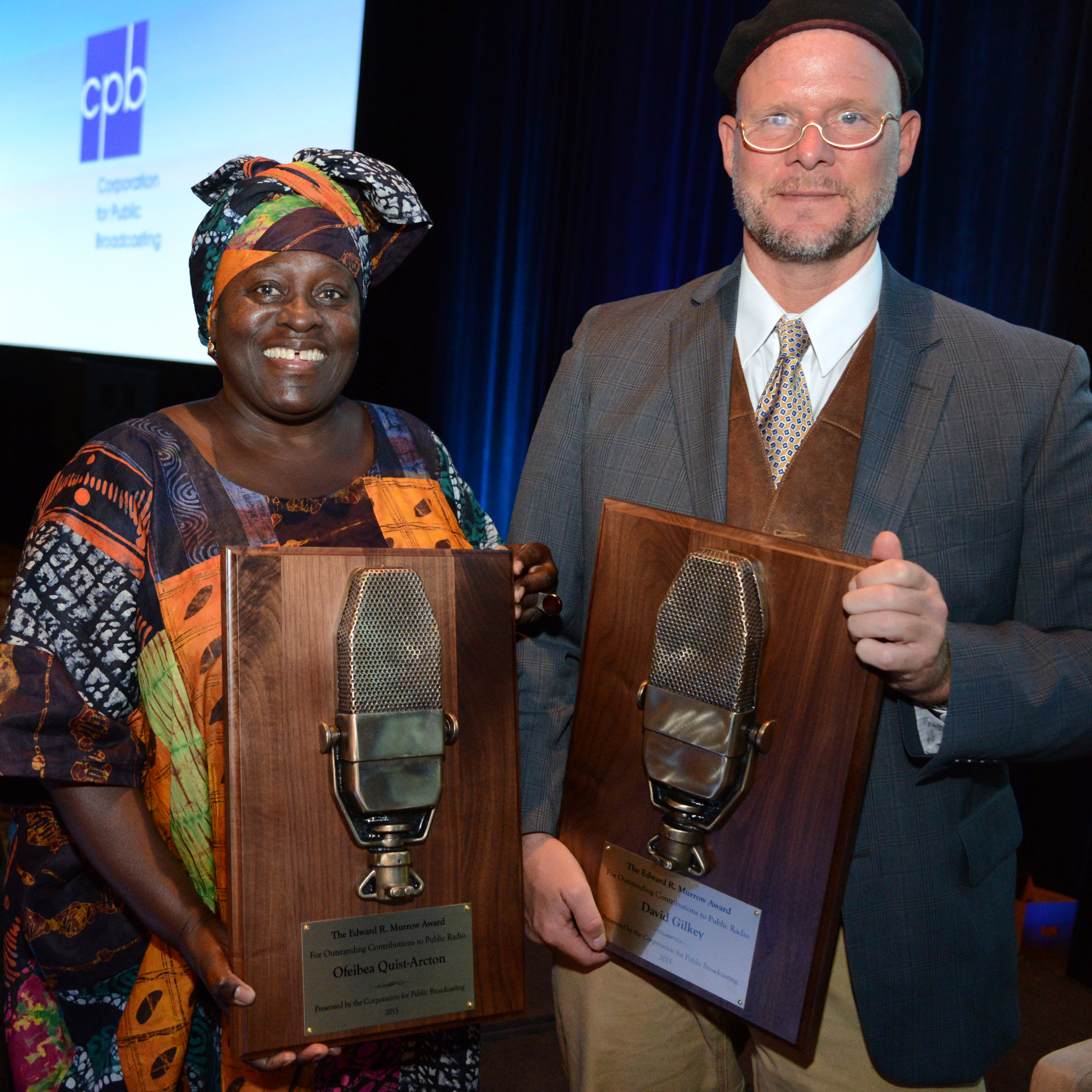 Washington, DC (July 7, 2015) -- On July 9, 2015, the Corporation for Public Broadcasting (CPB) will honor two journalists with the Edward R. Murrow Award. NPR International Correspondent Ofeibea Quist-Arcton will be recognized for her reporting across Africa including coverage of the Ebola epidemic and Boko Haram. And, for the first time, CPB will present the Murrow award to a multimedia NPR journalist, Photographer and Video Editor David Gilkey, for his coverage of international breaking news, military conflicts and natural disasters.

“This year’s Murrow Award celebrates the courage and commitment of two public media journalists who travel to conflict zones reporting the stories behind the headlines,” said Pat Harrison, president and CEO, CPB. “David Gilkey and Ofeibea Quist-Arcton are symbolic of the professionalism and dedication represented by public media journalists throughout our country and the world, bringing high-quality, trusted news and information to the American people.”

David Gilkey is an award-winning NPR photographer and video editor. For many years, he has reported from conflict zones in Afghanistan and the Middle East, on national disasters in Japan, Haiti and the Philippines, and on human tragedies including the Ebola crisis in West Africa. He is a leader in visual reporting who has earned 36 distinctions from the White House Photographers Association (WHPA) including Still Photographer of the Year in 2011. His reporting on difficulties faced by returning veterans is well-recognized including with a 2007 national Emmy Award for a video series “Band of Brothers” about Michigan Marines in Iraq.

Ofeibea Quist-Arcton is NPR’s international correspondent in Africa who is well-known to audiences as a trusted voice of insightful news from across the continent. A veteran reporter for 30 years, she was the BBC's West Africa correspondent and was a roving reporter for PRI’s The World before joining NPR. Quist-Arcton has been at the vanguard of NPR’s expanded international coverage, including reporting on the Ebola crisis in West Africa. Her reporting on women, most notably her dogged coverage of Boko Haram and their exploitation of young girls has provided unmatched insights and unique coverage for public broadcasting audiences domestically and worldwide.

In honor of the eight Charlie Hebdo staff killed in January and in support of freedom of the press and freedom of expression, CPB committed $7.5 million to four of public media’s flagship journalism enterprises - FRONTLINE, NPR’s International Coverage, PBS NewsHour, and PRI’s The World. CPB’s commitment to local, regional and national journalism will total $24 million this year.

The Murrow Award recognizes outstanding contributions to public radio by honoring individuals whose work has fostered the growth, quality and positive image of public radio. During three decades in broadcasting as reporter, producer, executive, and government official, Edward R. Murrow was an outspoken advocate for responsible, courageous, and imaginative use of the electronic media. Learn more about the Edward R. Murrow Award here including previous winners Lourdes Garcia-Navarro, Nina Totenberg, Ira Glass, and others.

The Corporation for Public Broadcasting (CPB), a private, nonprofit corporation created by Congress in 1967, is the steward of the federal government's investment in public broadcasting. It helps support the operations of more than 1,400 locally-owned and -operated public television and radio stations nationwide, and is the largest single source of funding for research, technology, and program development for public radio, television and related online services.