CPB Statement on the Passing of Joanne Rogers

Patricia Harrison, president and chief executive officer of the Corporation for Public Broadcasting (CPB), made the following statement today on the passing of Joanne Rogers.

“The Corporation for Public Broadcasting and the entire public media family mourn the loss of a national treasure in Joanne Rogers.

Joanne was married to “Mister Rogers’ Neighborhood” creator Fred Rogers for more than 50 years and was the face of his legacy after the public television pioneer died in 2003.

Joanne embodied the spirit, kindness and empathy that Fred brought to public television. While her sincerity, levity and authenticity kept him grounded, it also ensured that Fred’s work of connecting with children and helping them develop a sense of well-being continued after his death.

Not only was she married to Fred Rogers, but in her own right, through her own love of children and learning she made the world a better place. To those who were privileged to know her, just the sparkle in her eye when she looked at you or the warmth of her smile made everything right in the world for that moment.

We will long remember with love and gratitude Joanne’s work and commitment to kindness and civility. We share the sorrow of her family at her passing.” 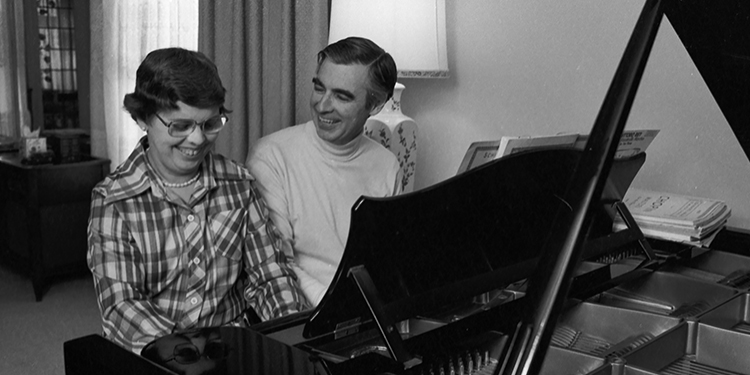 Joanne and Fred Rogers at their home. Photo by Jim Judkis, courtesy of Fred Rogers Productions

About CPB
The Corporation for Public Broadcasting, a private, nonprofit corporation created by Congress in 1967, is the steward of the federal government’s investment in public broadcasting. It helps support the operations of more than 1,500 locally managed and operated public television and radio stations nationwide. CPB is also the largest single source of funding for research, technology and program development for public radio, television and related online services. For more information, visit cpb.org, follow us on Twitter @CPBmedia, Facebook and LinkedIn and subscribe for other updates.