WASHINGTON, D.C. (June 14, 2022) – The Corporation for Public Broadcasting (CPB) announced a $500,000 grant to IndiJ Public Media, an independent non-profit news organization that owns ICT, formerly known as Indian Country Today. ICT began as the Lakota Times more than 40 years ago and has transformed into a digital news site and a national weekday broadcast covering Indigenous communities.

The two-year grant will support “ICT Newscast with Aliyah Chavez,” which is carried daily by 40 public television stations across the country. Funding will also support IndiJ Public Media’s evolution and expansion as a multi-platform public media company. 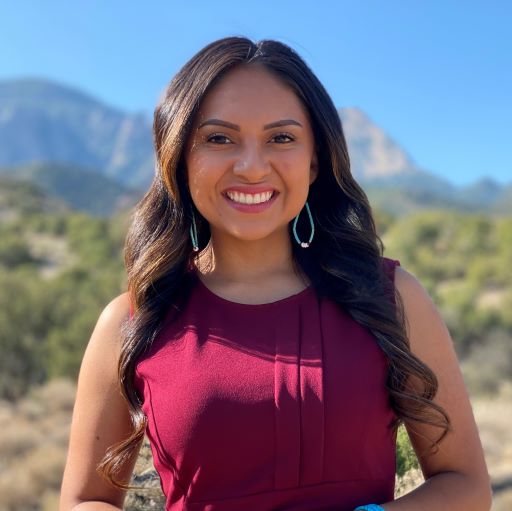 Aliyah Chavez, a citizen of Kewa Pueblo and anchor and producer of 'ICT Newscast With Aliyah Chavez'

“ICT is grateful for the support from CPB,” said Shirley Sneve, vice president of broadcasting at ICT. “We carry the legacy of Indian Country Today forward to public broadcasting audiences and Indigenous communities. As a nonprofit digital and broadcast journalism organization, we tell stories through the lens of our ancestors.” Sneve is a member of the Ponca Tribe of Nebraska, and Sicangu Lakota descent.

“ICT is a go-to source of trusted news and information by, for and about Native Americans,” said Kathy Merritt, CPB senior vice president, radio, journalism, and community service grant services. “CPB is proud to support this vital news organization, which provides a deep understanding of history and culture that adds important context to their reporting.”

The two-year grant will support the addition of two full-time producers for the weekday television newscast, a five-minute audio newscast, and multiplatform reporting for digital audiences. The grant will also help to support their sustainability efforts and the hiring of a marketing manager to build a cohesive audience growth strategy.

The grant marks a milestone in the evolution of Indian Country Today, which was founded in 1981 as The Lakota Times, a weekly print newspaper. Renamed Indian Country Today in 1992, the publication became a digital news platform in 2011 and was relaunched as a limited liability company under the National Congress of American Indians in 2017. Last March, the NCAI transferred its interests to IndiJ Public Media to operate as an independent company.

“ICT Newscast with Aliyah Chavez,” the flagship public television newscast, is carried by a growing number of public television stations and is a mainstay of the FNX Network, based in San Bernardino, California. It reaches parts of Canada and is distributed by National Indigenous Television, better known as NITV, in Australia. Arizona PBS is ICT’s partner and presenting station, based in Phoenix at the Walter Cronkite School of Journalism and Mass Communication at Arizona State University

About IndiJ Public Media
IndiJ Public Media is a nonprofit multiplatform news organization based in Phoenix, Arizona. It produces the “ICT Newscast with Aliyah Chavez,” airing on public television stations nationwide, as well as other multimedia programming covering Indigenous communities. Arizona PBS serves as its presenting station, at the Walter Cronkite School of Journalism and Mass Communications at Arizona State University.

About CPB
The Corporation for Public Broadcasting (CPB), a private, nonprofit corporation created by Congress in 1967, is the steward of the federal government’s investment in public broadcasting. It helps support the operations of more than 1,500 locally managed and operated public television and radio stations nationwide. CPB is also the largest single source of funding for research, technology, and program development for public radio, television, and related online services. For more information, visit www.cpb.org and follow us on Twitter  @CPBmedia, Facebook, LinkedIn, and subscribe for other updates.