Patricia de Stacy Harrison, Corporation for Public Broadcasting President and CEO, Knighted with Honor of 'Cavaliere' of the Order of Merit of the Italian Republic

WASHINGTON, D.C. (October 8, 2020) – Patricia de Stacy Harrison, president and CEO of the Corporation for Public Broadcasting (CPB), was awarded the Italian honor of “Cavaliere” of the Order of Merit of the Italian Republic, the highest-ranking honor of the Italian Republic. Armando Varricchio, Ambassador of Italy to the United States, presented the honor to Harrison October 7 at Villa Firenze, the Ambassador’s residence in Washington, D.C. 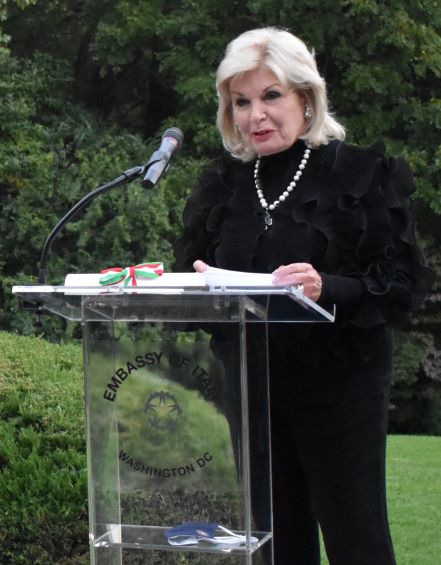 Pat Harrison was awarded the highest-ranking honor of the Italian Republic October 7.

"I am particularly pleased to award, on behalf of the Head of State, Patricia de Stacy Harrison and Anita Bevacqua McBride the Knighthood of the Order of Merit of the Republic. The decision of President Mattarella,” underlined Ambassador Varricchio, “testifies to their extraordinary personal and professional paths. Loyal to their country, these two amazing women have never stopped looking at Italy, proudly living their identity: American with Italian origins.”

The Ordine al Merito della Repubblica Italiana, the equivalent of a British knighthood, was established by the second President of the Italian Republic, Luigi Einaudi in 1951, to be awarded for "merit acquired for the nation." Those recognized stand out in the fields of literature, the arts, economy, public service, and social, philanthropic, and humanitarian activities and for long and conspicuous service in civilian and military careers.

“It is a distinct privilege to receive this honor from the President of the Republic on behalf of the Republic of Italy,” said Harrison. “My grandfather, Charles de Stacio came to this country at the age of 15 from Salerno, Italy. His love for Italy and the United States was only equaled by his love of and devotion to his family. As the leader of our family, he was a powerful role model, inspiring us to work hard, embrace education and always be prepared to explore new opportunities with courage and commitment.”

In their respective roles within the U.S. Administration, Patricia de Stacy Harrison and Anita Bevacqua McBride have played a key role in strengthening relations between the United States and Italy in all fields. A commitment that continues today within the NIAF where both remain an essential point of reference to cement and enhance the close ties between Italy and the USA, through the vast Italian-American community and the many American citizens who share a passion and love for Italy. 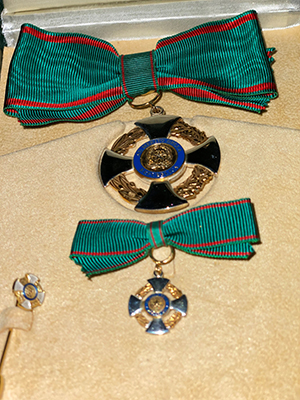 Harrison, in addition to being CPB’s longest-serving chief executive, served in the U.S. State Department as Assistant Secretary of State for Educational and Cultural Affairs, and as Acting Under Secretary for Public Diplomacy and Public Affairs. Born and raised in Brooklyn, she is chairman of the board of the National Italian American Foundation.

Harrison is the recipient of many awards and honors, including the Ellis Island Medal of Honor Award in 2017 and the U.S. Secretary of State’s Distinguished Service Award. Harrison, the author of two books, A Seat At The Table: An Insider’s Guide for America’s New Women Leaders and America’s New Women Entrepreneurs, received her B.A. from American University, Washington, DC, and honorary doctorates from the American University of Rome in 2002 and the School of Public Affairs, American University, in 2017. She is a member of the Board of Advisors at the Georgetown Institute for Women, Peace and Security.

In 2019, Harrison was appointed to the voting council for the inaugural Justice Ruth Bader Ginsburg Woman of Leadership Award, which recognizes the achievements of exceptional American women of positive and notable influence on society. In 2020, Harrison was nominated by the U.S. Department of State to serve on the International Task Force of the United States Semiquincentennial Commission, established by Congress to organize the commemoration of the 250th anniversary of the United States.

About CPB
The Corporation for Public Broadcasting, a private, nonprofit corporation created by Congress in 1967, is the steward of the federal government’s investment in public broadcasting. It helps support the operations of more than 1,500 locally managed and operated public television and radio stations nationwide. CPB is also the largest single source of funding for research, technology and program development for public radio, television and related online services. For more information, visit cpb.org, follow us on Twitter @CPBmedia, Facebook and LinkedIn and subscribe for email updates.