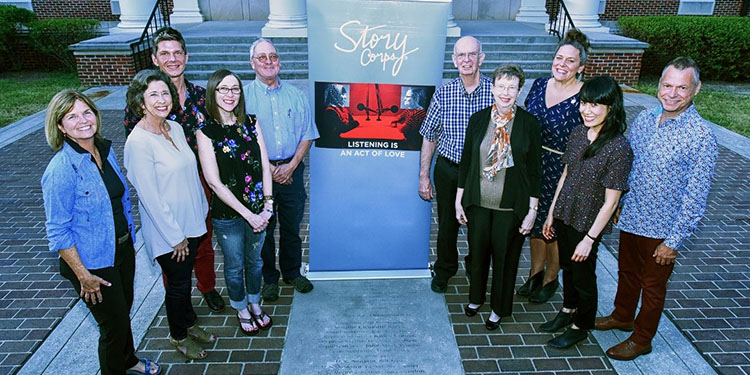 One great example of this kind of content comes from Cookeville, Tennessee, where public media station WCTE collaborated with StoryCorps and Independent Lens’ Indie Lens Pop-Up screening series to facilitate dialogue about health care challenges faced by this rural community. The engagement events were inspired by “The Providers,” a national public media documentary and an ITVS production presented on Independent Lens exploring the relationship between committed healthcare professionals, their patients, and their community in rural New Mexico. To support the participation of rural communities in the national dialogue, CPB provided a grant to ITVS to support WCTE and other local public media stations in rural areas across the U.S. to engage their community in conversation on topics discussed in the film such as health care gaps, challenges presented by addiction, and ways to bring new rural healthcare providers to the field.

"WCTE has enjoyed a tremendous partnership with ITVS and StoryCorps to share stories that unite us as a nation, but also reflect the true successes and issues of rural America from the perspective of those who live here in the Upper Cumberland region of Tennessee,” said Becky Magura, president and CEO of WCTE-TV.  “For our staff and our region, it is refreshing to be heard and to be valued by having ITVS and StoryCorps here to capture and distribute our stories.”

The Providers, by Independent Lens

WCTE hosted free Indie Lens Pop-Up screenings at locations throughout the region, which lost two rural hospitals this year. With assistance from StoryCorps, community members recorded their personal stories and reflections on health care gaps at these WCTE community engagement events. James Taylor, who recorded his interview with StoryCorps, was a guest panelist at WCTE’s Town Hall event on juvenile addiction based on the WCTE documentary "Bitter Pill: Youth at Risk."

StoryCorps participants talk about health care in their rural town.

“It was stressed to me, by my grandmother and mother, that if you want to be a nurse—a ‘real nurse’—work in a small hospital. That’s one reason why I wanted my grandmother interviewed: so that people and businesses could put a voice with these hospital closings,” said Taylor. “At its base, yes, healthcare is a business. But it is also a refuge for mercy. And we are losing that in rural communities.”

This culminating StoryCorps and ITVS Listening Event at Cookeville’s town hall featured some of the stories gathered by WCTE, New Mexico PBS (Albuquerque, NM), WSIU (Carbondale, IL), Basin PBS (Odessa, TX), and Valley PBS (Fresno, CA), all made possible by the CPB’s Coming Home: Connecting to Community initiative, and these conversations captured from around the country are preserved at the American Folklife Center at the Library of Congress.

A collection of educational resources for The Providers is available on PBS Learning Media, including discussion guides for High School and Higher Education instructors.  https://ca.pbslearningmedia.org/collection/the-providers/

Coming Home: Connecting to Community is a public media initiative supported by the Corporation for Public Broadcasting that celebrates the people, culture, and experiences of rural America through authentic local voices and talent. Local public media stations have a unique opportunity—through public media’s national and local network of community partners, storytellers, producers and distributors—to preserve and share community stories about the diversity, traditions and richness of small towns and rural life. Coming Home elevates these stories to a national audience, highlighting the shared values that connect us all as Americans.

Independent Lens is an Emmy® Award-winning weekly series airing on PBS Monday nights at 10:00PM. The acclaimed series, with Lois Vossen as executive producer, features documentaries united by the creative freedom, artistic achievement, and unflinching visions of independent filmmakers. Presented by ITVS, the series is funded by the Corporation for Public Broadcasting, a private corporation funded by the American people, with additional funding from PBS, the John D. and Catherine T. MacArthur Foundation, Wyncote Foundation, and the National Endowment for the Arts. For more visit www.pbs.org/independentlens/

Founded in 2003, StoryCorps has given 500,000 people—people of all backgrounds and beliefs, in thousands of towns and cities in all 50 states—the chance to record interviews about their lives. The organization preserves the recordings in its special StoryCorps archive at the American Folklife Center at the Library of Congress, the largest single collection of human voices ever gathered, and shares select stories with the public through StoryCorps’  podcast, NPR broadcasts, animated shorts, digital platforms, and best-selling books. These powerful human stories reflect the vast range of American experiences, wisdom and values; engender empathy and connection; and remind us how much more we have in common than divides us.