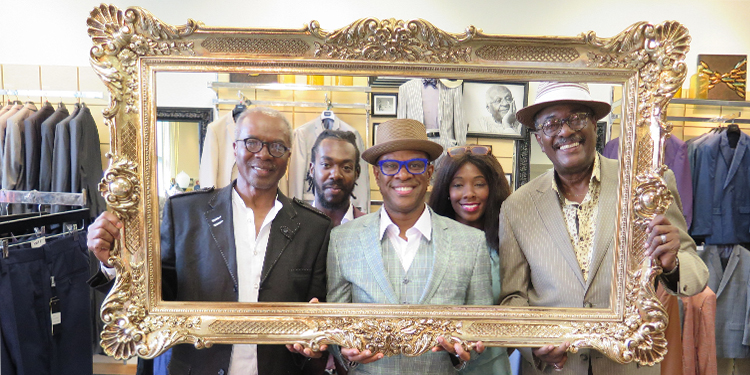 “Family Pictures USA” is a three-part series premiering August 12-13 on PBS (check local listings or PBS.org and the PBS Video App), that explores the history of North Carolina, Detroit and Southwest Florida through the lens of the family photo album. With CPB support, filmmaker Thomas Allen Harris worked with UNC-TV, Detroit Public Television and WGCU (Fort Myers, Fla.) to hold local family photo sharing events to draw out personal stories that expand our understanding of our shared history, diversity and common values.

“Family Pictures USA”  is part of the Digital Diaspora Family Reunion (DDFR), Harris’ community engagement project using film, video, live events, social media and workshops to break down barriers and start dialogues across cultures and between generations. DDFR holds roadshows across the country in which participants share family photos and stories in front of a live audience.

CPB caught up with Harris – a filmmaker, photographer, curator, and writer who lectures widely on personal archiving and the use of media as a tool for social change – to learn more about “Family Pictures USA” and his multimedia work:

Q: Why use family photographs as an entry point to look at history?

I come from a family of photographers, and I have been consumed with using the family photo album to uncover personal truths about my immediate and extended family.

Our ancestors curated their stories, creating deliberate visual narratives of their journeys and the journeys of their family members. The sequences of pictures included in one or a series of books contain our family stories, stories that we can return to over and over again to ground who we were and where we came from.

My late stepfather, B. Pule Leinaeng, left South Africa in 1960 to heed Nelson Mandela’s call to build a global anti-apartheid movement. When he died, I took his family album and photographic archives back to South Africa, reintroducing his story to young people who didn’t know it. Out of that came my film "Twelve Disciples of Nelson Mandela." That was the first time I got a chance to see how family albums could reconnect people with history that deeply affected them.

Q: What do you get from family photos that you don’t get from other types of historical research?

The family album brings forth images of lost, suppressed or hidden personal stories that are often excluded from mainstream historical narratives. When we bring all these photos/stories from various communities together in our series, a more nuanced and diverse historical narrative is revealed that spans generations and geographies. Through the family photo album, everyone gets a place at the table - something that can’t be said with traditional forms of historical research.

Q: What was the most surprising or interesting thing you found through creating “Family Pictures USA”?

Every participant, including myself, got to embark on journeys of discovery filled with incredible revelations about our personal and collective histories. In Florida, we met one person raised in the city, and another raised in the country. They both recalled going out with the same great-uncle, who took them to cut down swamp cabbage. But they had never met!

A young woman with a portrait of her great grandmother opened the frame so that we could scan the image, and behind it was another photo that she had never seen before. You can imagine her surprise not only to find this hidden image but to see that she and her great grandmother looked uncannily alike, even down to the haircut.

Q: You started the DDFR before everyone had a camera on their smartphone. Have digital photography and social media affected what you do, and if so, how?

Today we’re literally swimming in images, whether on our phones, our computers or hard drives, and it’s easier than ever to pass on and maintain our visual stories through social media. With these legions of images, the question becomes, how do we identify which images are important? How do we keep the important stories of the family album intact? A young father in a small Brooklyn apartment threw out two large boxes of family photos which he’d inherited from a recently deceased great aunt, unaware of their value. He said to us, “I wish I had met you a few months earlier. I’d still have those photos to pass down to my kids.” Unfortunately, this is a common fate of family albums in the digital age.

Q: You talk about a “new national family album.” Why is this important?

When we collectively share our photos, we become connected in a Heart - Mind space that spans time and geography. A place where the superficial differences of age or race or sex, orientation or religion – they all seem to fade! We as Americans are connected to one another in our shared experience of being human -- celebrating birthdays, gatherings with ones we love, or a new experience -- like riding a bike, graduating or falling in love. As these themes and similarities between family photos and stories coalesce, a meta narrative forms as a new national family album emerges.

Q: What role does public media play in this project?

The great benefit of public media is that it is rooted in communities and committed to telling diverse stories. Most local PBS stations have tremendously strong relationships with their communities. We want to help strengthen those relationships while helping audiences support these local institutions to help tell local stories that reach national audiences.