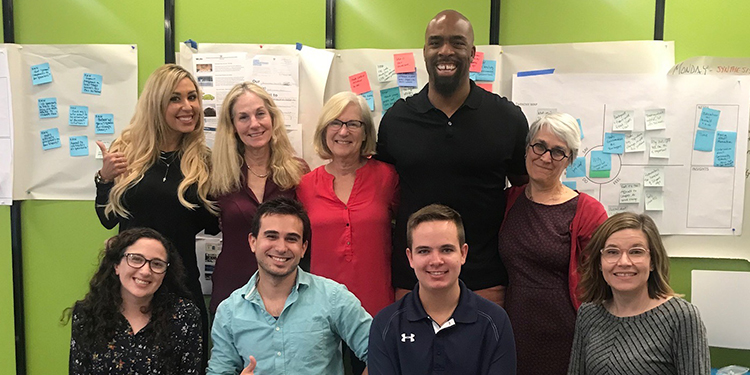 In Sacramento, Capital Public Radio is reframing the underwriting of its news service providing statehouse coverage to public radio stations across California to woo more underwriters. In Miami, WLRN is harnessing its environmental coverage to build a new avenue of support. And in Kentucky, Louisville Public Media is revising a local events listing site it acquired to draw new audiences and donations to public media. These are among the audience and revenue-growth projects being tested through an initiative at WBUR’s BizLab, funded by the Corporation for Public Broadcasting and Knight Foundation to nurture fund-raising innovation across public radio in the digital age.

“We all feel this urgency around maintaining the financial stability of our stations,” said BizLab Executive Director Joan DiMicco at the BizLab Summit, held recently in Boston. “Our mission of being a trusted and indispensable source of news and information is vital, not just to our existence, but for this country. BizLab’s goal is to identify and test new ideas for revenue … to benefit all of the system.”

The summit brought together principals from the six stations that worked with BizLab, an innovation incubator started by WBUR in 2015 to test models of sustainability for public radio. The stations, selected from 42 applicants, worked with BizLab through a six-phase process: Coming up with an idea, identifying the audience’s wants and needs, testing, revising the product, launching the product and generating revenue. Stations were coached to create multiple small, targeted experiments and encouraged to be bold, fail fast, learn and iterate ideas aligned to their station’s strategy.

WAMU (Washington, D.C.), which acquired the digital news site DCist in 2018, learned how to mobilize the site’s dedicated fan base toward monetary support and best position the brand with WAMU. Drawing on donors from a Kickstarter campaign, WAMU hosted a Valentine-themed focus group where supporters wrote love letters to DCist, providing surprisingly in-depth data on how they found the site and why it became significant to them. Launching a sustaining-only membership program in November, WAMU raised $6,538 from 427 supporters in a little over a month, well on its way to reaching 500 members by the end of the year.

Louisville Public Media, which in 2017 acquired local events calendar site Do502, tested ways to convert users to members as they explored how to incorporate the site into LPM. After surveying audiences at events and developing personas for Do502’s key audiences, LPM discovered that Do502 had a largely separate audience that would respond to exclusive events and a newsletter with member perks. Since piloting membership benefits focused on the unique value of the calendar site, Do502’s membership has grown 500 percent since April.

Detroit’s WDET, based at Wayne State University, sought to connect with mom-and-pop businesses that support public radio’s mission, but couldn’t afford traditional radio underwriting. Through in-person interviews, WDET learned that most promoted their business through social media, so the station developed an underwriting program for them to market to followers on WDET’s social media. The editorial and development departments collaborated on templates that provided a clear visual distinction between the sponsored content and WDET editorial content. BizLab helped the station break down silos, getting the editorial and business departments working together to increase revenue while maintaining editorial independence.

Capital Public Radio (Sacramento) reworked the underwriting structure of its news service, which provides statehouse coverage to other California public radio stations. The once profitable program had lost its statewide corporate underwriter, and through research, Capital Public Radio discovered that regional rather than statewide sponsorship was more attractive to other underwriters. In addition, the realization that it takes about 15 seconds to say the Pledge of Allegiance helped them reframe the potential of the 15-second underwriting spots to “15 Seconds of Impact.” Capital Public Radio brought in $65,000 in new revenue during their BizLab testing, with more than $104,000 more in pending revenue by the time of the summit.

Miami’s WLRN sought to use the station’s acclaimed environmental coverage to create a new membership donation channel, starting with an environmental newsletter. After conducting intercept interviews at environmental conferences, the team tested six newsletter designs with very positive responses. In August, they launched a weekly newsletter to their radio and TV audiences and now have over 18,000 subscribers and potential donors. The team launched a soft campaign for donors in December and endeavors to be a hub combining journalism and community engagement.

Vermont Public Radio sought to build support in Windham County in southern Vermont. Although VPR has a dedicated reporter in the county, the perceptions persisted that the statewide network was focused only on the more populous northern part of the state. Building on a 2018 listening tour of Vermont’s 14 counties, VPR conducted regional interviews and analyzed digital data from vpr.org and social media, finding that many of its listeners get their news from Facebook. They launched an e-newsletter, promoted content on Facebook and had their Windham County reporter solicit news tips from the community. Visitors to the VPR website from Windham County were up 122 percent from August to December.

Michelle Owens, director of marketing and engagement at Vermont Public Radio, became confident that VPR can start small and experiment rather than passing up opportunities because they lacked the staff or resources to do things perfectly. “It’s already incorporated into a lot of our thinking just about how we do our everyday work, which has been great.”

As BizLab tests revenue ideas for public radio, they produce reports, articles and webinars based on theirs findings, which can be found on their website. A video of the BizLab Summit is available at https://www.youtube.com/watch?v=dIqNF0-vSXg&feature=youtu.be&utm.