As malls hollow out or go belly up across the country, two public broadcasters are staking a claim to helping repurpose shuttered retail behemoths in their communities. In the process, they are expanding public media’s mission in novel ways.

For KLRU-TV, Austin PBS, a move to the former Highland Mall, purchased by Austin Community College, will fortify its partnerships in local workforce development initiatives, create a center for teaching digital storytelling, inaugurate new studios and event space, and create a meeting hub for local nonprofits.

For WUMR 91.7 FM, the jazz station licensed to the University of Memphis, its move to the once-blighted, massive Sears distribution center will involve a spin into a new nonprofit. Later this year, it will embark on a different life in what has become Crosstown Concourse, an arts and mixed-use complex where it will program a revised music line-up and start hosting local reports from The Daily Memphian, a 18-month-old online news startup.

While neither pubcaster is a lead developer in reimagining these once-abandoned retail spaces, they are both partnering with creative forces in their communities to reclaim community assets. And they are expanding in novel ways the idea of public media collaboration beyond the shared reporting networks public broadcasters often deploy.

“It’s gonna be great,” said Bill Stotesbery, CEO and general manager of Austin PBS. “We’re trying to do something that has an intentional community-facing focus.”

KLRU, which is licensed to the community, has been on the UT campus for more than 50 years, and its Studio 6A was the first home of the iconic  “Austin City Limits,” the longest-running music performance show in TV history.

“We’ve lived here in a false economy because the university has given us a very low rental rate,” Stotesbery said. The move to Highland comes with an appealing rental rate that’s locked in for 30 years.

For WUMR, the move is a new lease on life. The university, after a year-long study, had determined that the station either had to cease operations or find outside partners to stay alive.  In choosing outside partners, the university, in announcing the move,  said, “we have put a priority on continued student involvement and opportunity.” 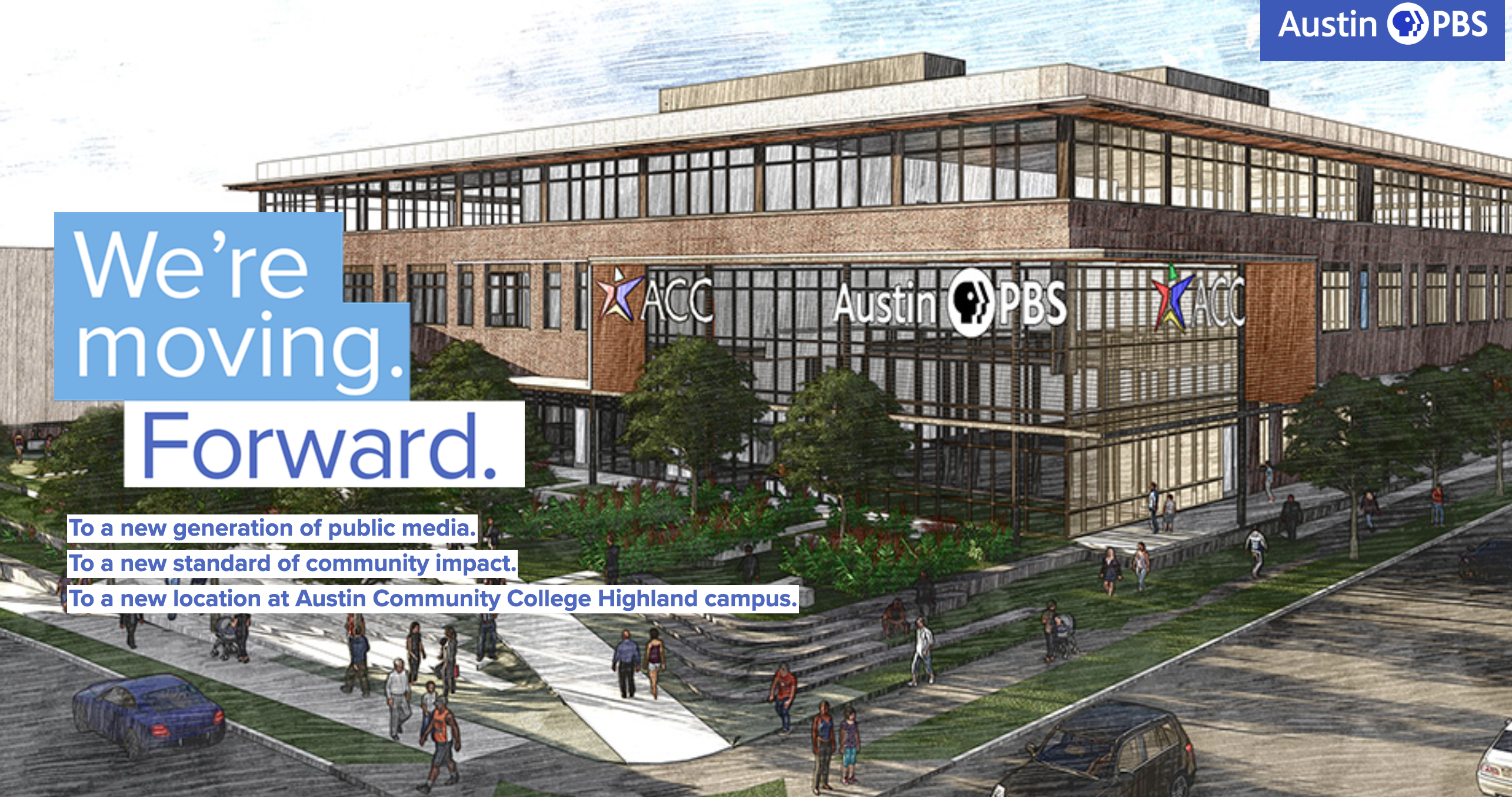 KLRU’s odyssey into the former 1.2 million-square-foot Highland Mall began some six years ago when the university began taking back pieces of its space because the Moody College was growing so fast.  Finally, the university presented the station with an ultimatum: Either merge with the university-licensed KUT radio or leave campus, Stotesbery said.

Meanwhile, Austin Community College (ACC) had issued bonds to buy Highland Mall, which opened as Austin’s first enclosed mall in 1971 but closed its doors in 2015. ACC cut a deal with private developers to build retail stores and restaurants in the former office space. And the university focused on turning the primary mall into a new campus.

When the new owner of Rackspace, a cloud-hosting company slated to occupy the former Dilliard’s department store, canceled its lease in 2017, ACC came to KLRU and said: “We might have something for you,” Stotesbery recounted.

Now Austin PBS will occupy the first floor, sharing space with ACC’s underutilized cable television station. There will be three media production studios, one seating some 400 people. And it plans several new initiatives.

One goal is to create the Austin Media Innovation Center to train storytellers at the junior college level to use new media tools for public media.

In an effort called Amplifer, the station aims to focus on solutions-based approaches to community issues, including workforce development, Stotesbery said. (The station has been airing short videos on workforce development with a $200,000 CPB grant.) A third focus, the Educational Resource Center, will leverage PBS’s learning resources for teachers and teaching assistants.

Meanwhile, KLRU will be part of other developments. In the former JC Penney store, ACC has created its ACCelerator, one of the nation’s largest installations of Apple computers for interactive student learning. A BioScience incubator and ACC’s Fashion Institute also occupy former mall space.

The station expects to begin moving in by August and be fully operating by January 2021.

“It’s a pretty innovative structure, and we're just happy the college was willing to consider it,” Stotesbery said. KLRU is working to raise $20 million to help fund the transition.

The newly created Crosstown Radio Partnership slated to operate the next iteration of WUMR arose from a confluence of developments.

Several years ago, amid the decline of the city’s daily newspaper, some Memphians began planning a local news startup, the Daily Memphian, which launched in September 2018.  As part of the planning, they also helped launch U of M’s Institute for Public Service Reporting. Now, The Daily Memphian publishes investigative stories produced by the institute as well as stories from student interns.

Meanwhile, art history professor Todd Richardson and video artist Christopher Miner were realizing a long-standing dream of converting the 1.5 million-square-foot Sears eyesore, vacant since 1993, into a retail-residential-arts complex, with an emphasis on Memphis-style music, arts and culture. Crosstown Concourse opened in 2017.

In December, the university approved the transfer of WUMR’s license to a new nonprofit, the Crosstown Radio Partnership (CRP), consisting of the university, The Daily Memphian and Crosstown Concourse.  CRP will keep the station on the air and expand its music and news programming to appeal to the broader Memphis community. (The nonprofit is awaiting IRS approval and the license transfer awaits FCC approval.)

The Daily Memphian will provide local newscasts and a weekly public service program and will help the station solicit support, said CEO Eric Barnes. He called CRP a “natural extension” of the site’s partnership with the Institute for Public Service Reporting, “as well as our internship program, which includes students from the U of M’s journalism school getting real-world work experience in our newsroom.”

WUMR will be able to broadcast concerts and other events from the concourse’s Green Room and Crosstown Theater.

The partnership will lease the radio’s equipment. The university will contribute $100,000 per year toward WUMR’s operations, said Robby Grant, the local musician and the Crosstown Radio Partnership consultant. It will also provide an instructional coordinator to work with students working at the station.

Barnes and Grant estimate the station’s new format will be at least 80% music and some 20% news and information. The partnership is exploring changing the call letters.

“The visibility of Crosstown Concourse will be tremendous for our radio station and will provide an even more professional work experience for our students,” U of M President David Rudd said in a statement announcing WUMR’s transition.

Richardson, now president of the nonprofit Crosstown Redevelopment Cooperative, said in an accompanying statement that he sees the move as building on the collaboration among the city’s cultural and artistic effort that gave rise to Crosstown Concourse. “It’s with that spirit that this new radio station is formed,” he said.

These moves not only enhance programming for the two stations, they also help repurpose community assets.  This taxpayer deems them very worthy of support.