About 46 reporters will start working in some 34 public broadcasting newsrooms in June, thanks to being named as part of this year’s Report for America (R4A) reporting corps.

This means that pubcaster pitches secured about 20% of the 225 reporting slots in this year’s cohort group, en route to 162 newsrooms. It was a credit to be selected from 1,800 applications. R4A pays half the salaries (up to $20,000 for corps reporters) for the first year.

Their onboarding signals that pubcasters, especially public radio stations, really want to amp up their local reporting as they fathom the daunting disappearance of local news amid withering furloughs and layoffs at nearby news organizations.

For the smaller stations, these additional journalists will actually swell their newsroom staffs, often tiny to begin with, by 20% – and more.

“It’s huge,” said Tim Lambert, multimedia news director of WITF in Harrisburg, Pennsylvania, which signed up for two bilingual reporters to cover the region’s growing Hispanic community. The additions grow his two news staffs – one online and one radio – from six to eight.

So where will the public hear or see these reports? Well, it’s complicated.

Because most public radio stations schedule a full day of national programming, such as NPR’s “Morning Edition” or “All Things Considered,” they must shoehorn local news briefs into short, pre-set times scheduled twice an hour in the national news magazines.  For lengthier reports, they can also sub out – or “cover” – segments of that national program by inserting instead a local news story or interview. Often these reports, as listeners know, are repeated throughout the program or during the day.

For instance, “Morning Edition’s” news clock offers two newscasts slots at the top of the hour, the first at 2 minutes, 51 seconds (2:51) and the second at 1:39, plus a music “bed.” Local stations can cut into this time to deliver local news briefs. Halfway through the hour, two newscasts clock in at 1:29 each plus more music. Local stations can also decide to sub out one or more of ME’s feature slots with a local story, giving them a story block that can range from four to nearly 7½ minutes. 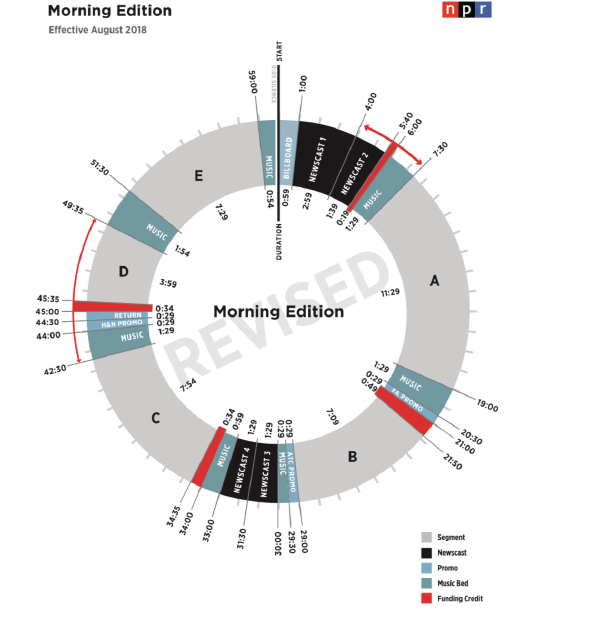 Most of these “clocks” were set before the coronavirus devastated advertising revenue that supported local newsrooms, leading to hundreds of journalists being furloughed or laid off.

While local stations can decide how many local stories to insert in the national newsmagazines and newscasts, there are some limits. NPR spokesperson Ben Fishel said, “In the case of ME and ATC, we provide guidelines on how much NPR content may be replaced with local content each hour – roughly two of five segments each hour. There are similar guidelines for NPR newscasts within these shows.”

To be sure, local stations need national programs to fill a full day of airtime – plus most abide by benchmarks that they use a significant portion of their federal funding to support national programs from NPR or other content creators.

Because few stations have a daily local newscast, the rest of their local news must find a home elsewhere. Key venues include a public affairs show or a Friday news roundup, in a podcast, in a newsletter or in a station’s website or social media feeds, which have seen huge upticks in traffic.

Kathy Merritt, CPB’s senior vice president for journalism and radio, points to the expansion of these other platforms as giving audiences other options to access local news and information. Moreover, she said, “I think any station can provide the amount of local news they want to provide within the national programming.”

Still, broadcast air time is most effective. “It really reaches the most people in an immediate sense through broadcasting,” said Steve Junker, WCAI managing editor of news.

Nevertheless, many of this year’s R4A newsrooms are finding other distribution channels.

For WCAI, the NPR station for Cape Cod, Martha’s Vineyard and Nantucket, climate change registers conspicuous everyday impacts. The station will get to keep its R4A climate reporter, Eve Zuckoff, for a second year; she will be one of six journalists at the station. Her stories will run in ME and ATC newscast spots, with longer stories going into those programs’ optional cutaways, Junker said. She might participate in “The Point,” the station’s public affairs program that airs at 9 a.m. and 7 p.m. weekdays, including being interviewed in the “Friday News Roundup” in that time period.

“I’m always trying to stretch the programming to insert our local content so that it looks seamless,” Junker said. WCAI has some added benefits: It can amplify its reports by sharing with its partners in the New England News Collaborative and with its parent, WGBH in Boston.

WNIJ, Northern Public Radio, licensed to Northern Illinois University in DeKalb, got two R4A reporters, one to cover substance abuse and police relations and one to cover arts and culture in the coming year – both adding diversity, said news director Jenna Dooley. Their news briefs will air in the NPR news magazines and they will usually cover the newsmagazines’ D segment with longer local reports. The station extends the reach of its news reports by simulcasting to Carbondale, in the southern part of the state.

Yellowstone Public Radio in Billings, Montana, also “carves the normal holes” out of ME and ATC and will cover the longer E segment with features, said Ken Siebert, interim general manager and program director. It will host two R4A reporters, one covering Native American issues and one covering the Montana statehouse, growing it newsroom to eight. It rolls up most of its regional news reporting, and reports from Montana Public Radio, into its daily podcast, “The Worm,” available at 7 a.m. With a coverage area the size of Great Britain in the rural eastern part of the state, the station produces reports that often get picked up by NPR and National Native News, Siebert said.

WITF in Central Pennsylvania can pick up some R4A reports in its daily 9 a.m. “Smart Talk” program about regional issues. And it simulcasts its programming to two other cities. Lambert said he intends to distribute stories from his two R4A reporters in Spanish with plans to put the audio online and share reports with a smaller Spanish publication in the area as well as with local community organizations and other public radio stations in the state. R4A “is allowing us to reach an audience that we have not attempted to reach,” he said. “Plus now we’re adding people while others are laying off.” One R4A reporter will comprise 25%  of the staff of PAPost, a statewide news site. The other will join three other reporters at the station and will focus on Reading, Pennsylvania.

Delaware Public Media, a digital-first operation that added radio eight years ago, is getting an R4A reporter to cover down-ballot local elections, growing its news staff to six. It will also run its local reports in the national news magazines and on its weekly public affairs show, “The Green.” It hopes to start expanding that program to twice a week soon as it tries to provide coverage cut back by other news organizations, said news director Tom Byrne.

Interestingly, while eight public broadcasters had to pull out of this year’s R4A program, citing declining revenues amid the coronavirus pandemic, the station leaders I interviewed are finding that expanded R4A news coverage boosts their ability to raise money.

WNIJ’s Dooley said the station added a module to its pledge form inviting donors to support its R4A reporters. “People were curious and did check that box,” she said.

Yellowstone’s Siebert said he’s seeing “the best fundraising we’ve ever had.”  He said the station really pitched its opportunity to get R4A reporters as “a coup to be chosen.”

And Delaware’s Byrne says having an R4A reporter allows the station to do more than pitch a concept for coverage. “You can say: “Look at that reporter. If you fund it, it will stay. If not, it will go.”

R4A co-founder Steve Waldman told Current magazine, that “public radio is becoming quite an important part of the program,” as stations try to strengthen news operations to offset newspapers contracting in their communities.

Building on feedback from pubcasters, R4A national director Kim Kleman said that next year the initiative might give public media organizations an earlier heads up – in the summer rather than December – that they are slated to get a reporter so they can raise the funds to support the position. “If they need that extra runway, I think we should give it to them.”