In the not-so-distant past, pubcasters owned the membership model of fundraising; they solicited new donors to make monthly or one-time contributions in return for a small thank-you gift or VIP invites to events.  (Corporate or philanthropic underwriters provided larger dollars.)

Now, nearly every media outlet – from legacy newspapers to indie news startups and new podcasts – is aggressively lifting a page from that playbook and reaching out to their audiences for support. In fact, several grant-funded initiatives such as the News Revenue Hub have launched to teach them precisely how to replicate the public broadcasting model. And do it at lower cost.

Public radio, which receives less federal funding than most taxpayers think, is now challenged to test-drive new revenue opportunities. Six of those ideas got a public unveiling earlier this week at WBUR’s BizLab Summit.  BizLab is supported by CPB and the Knight Foundation.

These quick-turnaround experiments all met with some success. But while the engagement metrics were encouraging, the amount of early revenue raised was sobering and indicative of the hard work required going forward. The initiatives selected for targeted coaching ranged from efforts to:

Every journalism student taking an entrepreneurial media course (and every professor teaching one, including me), would recognize the basic skills imparted:

The BizLab projects took just two months to research, collect and analyze data and four months to test a prototype.

Some ideas for getting input from users and listeners were especially clever.  WAMU, for instance, asked crowd funding supporters of DCist to write a “love letter,” spelling out how they met and what they valued about the relationship. Some projects used scripted “intercept” questions to interview people at events or focus groups. 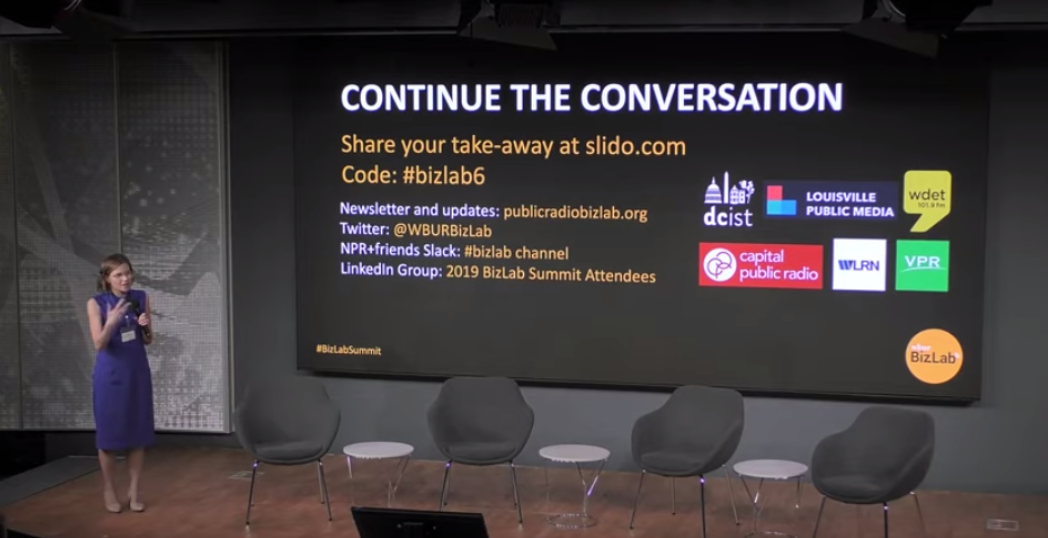 Data crunching was key throughout.  Particularly striking to me were insights that the projects gleaned in-house once they got help mining their website, social media and other audience data. This itself could be a useful initiative across the system. Layering new information from surveys, events, focus groups, interviews and other user outreach helped refine ideas. When Do502 learned its users didn’t care about sports events, sports got canned.  When VPR learned that Facebook was the “town square” for residents of its southern counties, it refined a social media strategy for news from that area. Capital Public Radio learned that most of the contacts in its station network were outdated, and advertisers wanted regional, not statewide advertising zones. So it updated the names and created North, Central and Southern California underwriting areas.

Measuring success took different turns. As public radio stations increasingly look at acquisitions to build capacity, DCist, the local news site WAMU acquired in 2018, became an interesting prototype. DCist sought to develop a distinct membership program for a digital news site within a larger public radio station, said Maddie Poore, membership coordinator. After two focus groups asked people what they hoped to get out of DCist, the site rolled out a beta membership program inviting 1,500 Kickstarter backers to be test pilots. The site converted 10% of those, adding 150 new members. Their new goal, launched Nov. 1, was 500 new members and they had 427 as of the summit, Poore said.

Louisville Public Media was seeking to integrate a for-profit event-listing site, Do502, into its nonprofit operation. It learned that a large part of the site’s audience didn’t overlap with LPM.  And it found that Do502 people wanted to come to its events and could be converted to members.

WDET at Wayne State University learned that small local businesses that cannot afford typical radio promotions would pay $100 for a shot at social media promotion. So it built Facebook and Instagram frameworks to help them do that while allowing the businesses to affiliate with WDET’s brand.

Vermont Public Radio learned it not only needed to publish the stories produced by a new reporter covering Windham County in southern Vermont, it needed to promote them, too. Those stories now appear on its Facebook site and in a Southern Vermont newsletter. It is also inviting story ideas from area residents.

Using mini surveys, WLRN found there was interest in an environmental newsletter in climate-ravaged Florida. Then working with the News Revenue Hub, it began acquiring subscribers through events. The newsletter now has 17,000 subscribers with a 30 percent open rate, said Giselle Reed, director of strategic initiatives. Reed’s offer to write the newsletter, though, was viewed as “crossing the line,” so an engagement editor took on that task.

Keeping intact the firewall that has traditionally separated fund raising from editorial was a prevailing issue for all the BizLab projects. This is something pubcasters need to work out. Their competitors are already finding that cross-collaboration between departments is a win-win for all.