Should We Disrupt Public Media to Create More Local News?

What role should public media play in supplying communities with more local news?

“I think it should be central,” a former CPB board member said earlier this week at a gathering that wrestled with solutions to the rapid spread of local news deserts around the country. His focus was on redirecting some of the $445 million that pubcasters annually receive in federal funding. “How can we use that $445 million to better support local journalism?” Howard Husock asked.

Funding such a goal, he said, would likely involve a “rethinking” of the Public Broadcasting Act of 1967 to allow public radio stations to retain more of their federal dollars – as long as those dollars were directed at producing more local news.

Husock was appointed as one of the CPB Board’s Republican representatives by President Obama. His term ended in 2018. He is now vice president of research and publications at the Manhattan Institute.

He pitched his idea on Monday at a launch event for new research by Gallup and the Knight Foundation. He was one of three panelists exploring “Public Good or Private Enterprise? A Policy Discussion on the Future of Local News.” Husock has advocated his proposal for several years in several media commentaries.

While Husock’s idea is intriguing, it would involve only public radio stations. The pot of funds that might be freed up would be about $22.7 million, a little more than 24% of the total funding the stations are to receive in the current fiscal year. Here’s how that works. 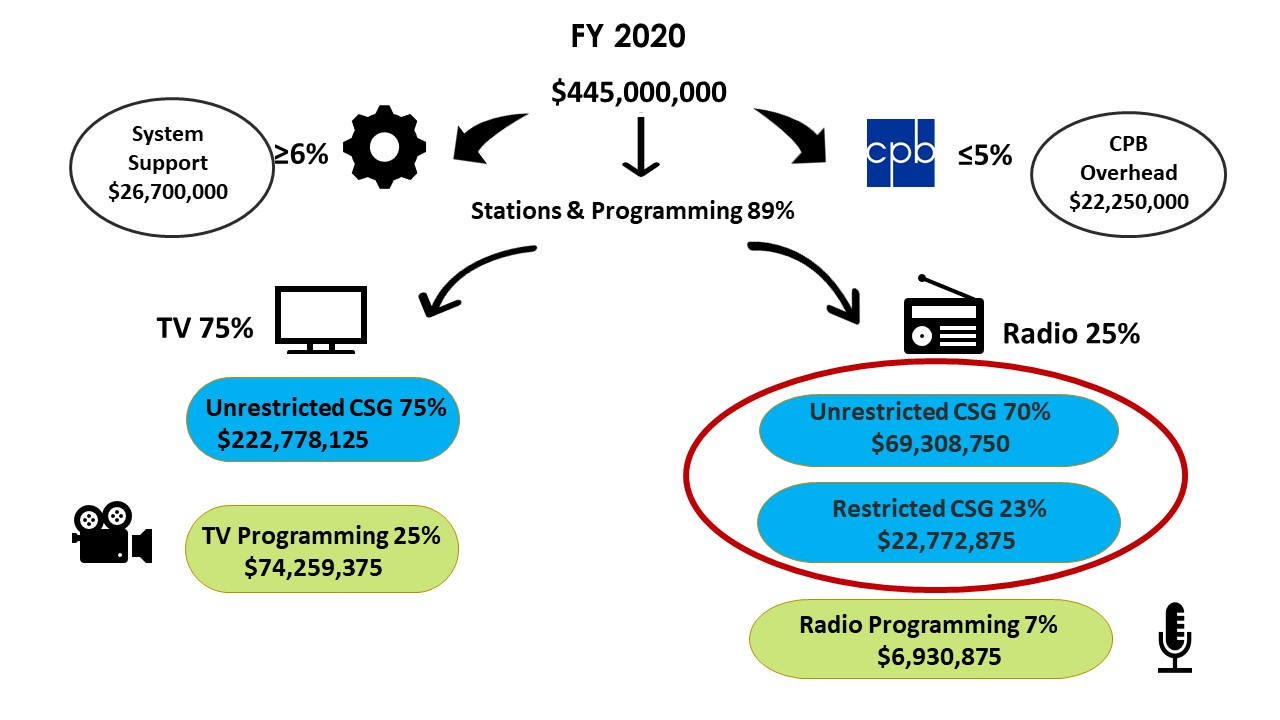 Distribution of federal funding for public broadcasting in FY 2020

Nearly $315 million of CPB’s $445 million in federal funding is divvied up to supply core Community Service Grants to about 1,500 public broadcasters around the country.  In FY 2020, nearly $222.8 million of that is going to public television stations. Those funds are unrestricted, which means the stations can use the funds for such things as local or national content production, educational services or public safety.

Some $92 million will go to the more than 1,000 public radio stations eligible for CPB funding. Of that amount, nearly $22.8 million is “restricted,” specifically designated to be used to increase national programming.  Stations may either acquire that programming from a national producer such as “Morning Edition” from NPR or “Marketplace” from American Public Media.  Or they can produce national programming themselves, such as WAMU does with “1A.”

That leaves some $69.3 million for all their other needs, including covering local news. Of course, federal funding provides only a small portion of most pubcasters’ annual budgets.  Individuals, philanthropies, and underwriters round out the rest.

Husock suggested that some of the Communication Act’s requirements might be out of sync with today’s reality. The media landscape has undergone major transformations since 1967 with the rise of cable television, the internet and streaming.

He asked: Why should local licensees continue to support the production of national programs when listeners can increasingly access such programming directly from NPR rather than listen to their local public radio stations?

National content producers say they need the contributions from public media licensees in order to supply them with the national programs that they air daily. And some local affiliates say that popular national programs boost their fundraising capacity.  Would they opt not to acquire those programs if they could use the money to build out their local report?

“Let them keep the money,” Husock said – under a mandate to produce local content. He acknowledged that transitioning from original public broadcasting protocols “can be dicey” and might need a new Carnegie Commission, akin to the 1964 effort that helped invent public broadcasting, to figure this out.

“I think if we migrate to a more locally oriented focus … with our public broadcasting dollars, we’d actually become more bipartisan,” he suggested at Monday’s event.

Reports on the dire state of local news are being issued fast and furiously nowadays. In the past week alone, Gallup and the Knight Foundation reported that Americans believe everyone should have access to local news, but they are not always willing to pay for it. The Democracy Fund published a tutorial on how communities can map their local news ecosystems.  Another recent Knight report pronounced that local news sources are more trusted than national news outlets, but that partisanship is becoming a “powerful lens” through which Americans evaluate their news outlets.

There is also a steady drip of statistics quantifying ever-growing local news deserts: Some 2,100 newspapers have closed in the past 15 years – many in economically struggling communities. Private-equity firms have snapped up others and stripped away their newsgathering operations. Thousands of journalists have been laid off. And the advertising-supported business model for news has been decimated by the ad-intensive internet behemoths Google and Facebook.

In suggesting that public broadcasters shoulder more of the responsibility for providing local news, Husock gave a nod to the fact that this is already happening.

For instance, large public radio stations, such as WNYC, KPCC and WHYY, have acquired local news startups to beef up their local news. PBS39 in Pennsylvania’s Lehigh Valley has launched a nightly local news television program and is partnering with Lehigh University to supply local radio news.  And CPB itself has directly funded collaborations such as the Local Journalism Collaborations for regional news and FRONTLINE’s Local Journalism Project to increase local investigating reporting among other initiatives.

Whether Husock’s idea gets any traction remains to be seen. Also unclear is whether public radio stations would skip some national programming if it meant more funds for building out their local news offerings.  On Monday, Husock’s idea was described as “interesting,” but it strikes me as worthy of some more study.