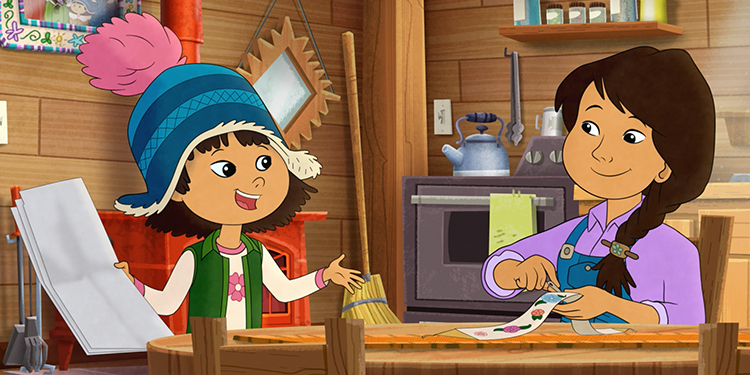 Through the animated adventures of a 10-year-old Alaska Native girl, the PBS series “Molly of Denali” is bringing literacy skills and the Alaska Native culture to children ages 4-8 across the country. The animated children’s program premieres nationwide on PBS stations, the 24/7 PBS KIDS channel, and PBS KIDS digital platforms on July 15, 2019.

The first nationally distributed children’s series to feature a Native American lead character, "Molly of Denali" features Molly Mabray, a contemporary Gwich’in/Koyukon/Dena’ina Athabascan girl whose family runs a trading post in the fictional village of Qyah. The series is developed and produced by WGBH in partnership with CBC Kids, with support from the Corporation for Public Broadcasting (CPB). It is also funded through the CPB-PBS Ready To Learn Initiative, which is funded by Congress and administered by the U.S. Department of Education to promote early science and literacy learning, with an emphasis on supporting children from underserved communities.

Molly uses maps and other resources to figure things out.

Molly records her adventures in a vlog, and in every episode, she navigates her world and figures things out with the help of books, online resources, field guides, historical documents, maps, tables, posters, photos and Indigenous knowledge from elders. By using a variety of informational texts to solve problems, Molly demonstrates foundational literacy skills needed by today’s young learners. The innovative learning framework for this series was developed by literacy expert Nell K. Duke from the University of Michigan.

"Molly of Denali" includes Alaska Native voices in all aspects of the production, with creative producer Princess Daazhraii Johnson and Alaska Native screenwriters, producers, advisers and musicians. All the Alaska Native characters, including Molly, are voiced by Indigenous vocal talent.

The Corporation for Public Broadcasting funded voiceover training for children in Alaska, resulting in a pool of young actors who may be cast in the series, and a scriptwriting fellowship program for six Alaska Native writers, who received mentorship support to create scripts for the series. Four of the fellows’ scripts will be produced for the first season.

With an emphasis on family and intergenerational relationships, "Molly of Denali" incorporates Alaska Native values, such as respecting others, sharing what you have, and honoring your elders. At the same time, it showcases contemporary aspects of rural life, including strong female role models and how technology aids in communication. The show also gives young viewers a window into the Alaskan experience through live-action interstitials featuring local children and regions filmed by Alaskan production teams, including Alaska Public Media, KUAC, the University of Alaska-Fairbanks Frame and Channel Films.

The Molly of Denali podcast, an eight-episode prequel to the TV series from WGBH in partnership with PRX and Gen-Z Media, launched in May to set the stage for the series. Online games, personalized learning resources and ideas for parents are available at pbskids.org/molly, The CPB-PBS Ready To Learn Initiative is also working with public television stations across the country to implement learning resources for schools, community partners and families. These resources will be available through PBS LearningMedia.

“We are excited to bring the world of Molly of Denali to audiences everywhere,” said WGBH Executive Producer Dorothea Gillim. “What began with the idea of creating a show based on the joy children find in ‘playing store’ has evolved into the story of kids and community, and an authentic reflection of life in Alaska, with an important Informational Text curriculum to support it.”